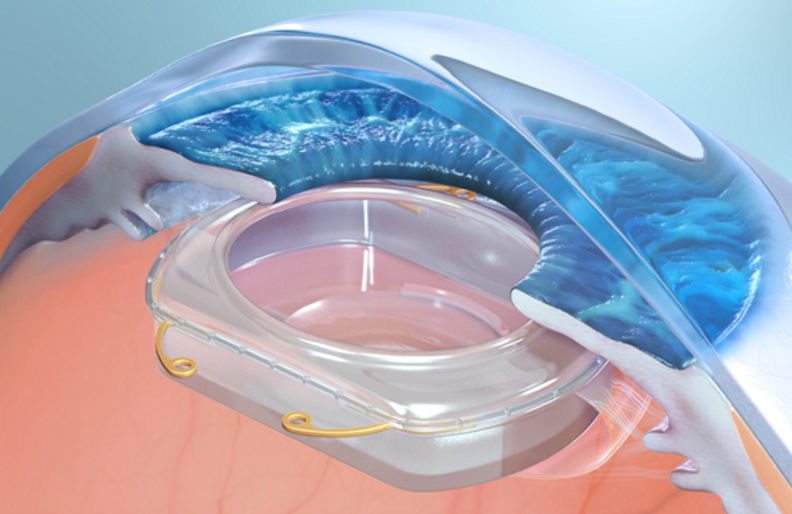 Google and other tech companies have come up with glasses and contact lenses for the purposes of AR, but Omega Ophthalmics is taking a much more invasive approach by using surgically implanted lenses to create a space for augmented reality inside the eye.

It sounds wild, but lens implants aren’t a new thing. Implanted lenses are commonly used as a solve for cataracts and other degenerative diseases mostly affecting senior citizens; about 3.6 million patients in the U.S. get some sort of procedure for the disease every year.

Cataract surgery involves removal of the cloudy lens and replacing it with a thin artificial type of lens. Co-founder and board-certified ophthalmologist Gary Wortz saw an opportunity here to offer not just a lens but a platform to which other manufacturers could add different interactive sensors, drug delivery devices and the inclusion of AR/VR integration.

“We’re creating the glove,” Wortz says, comparing it to what Elon Musk wants to do with neural lace inside the brain. “Inside of the eye we are creating this biologically inert space that is going to stay open for business for whoever wants to develop an implant that will sort of fit hand-in-glove.”

Though, he doesn’t expect young people with good vision to come running for AR implants anytime soon. Instead, he thinks his platform has a much broader application for 70-somethings wanting to maintain independence. An augmented map to help this person get around or to alert them if something is wrong medically would be useful.

He also mentioned the usefulness to “super soldiers” and others.

“We know there’s a huge market for AR; this is essentially a real estate play that tech companies don’t realize yet,” his co-founder and CEO Rick Ifland told me over the phone.

The company is not looking for any outside investments for the idea at this time — though Wortz and Ifland mentioned they’d been approached by two major VC firms in New York and Orange County. However, Omega has already taken initial capital from angel investors and ophthalmologists “that understand the space.” Wortz said.

Does the technology work? Maybe. So far, Omega has hit the six-month mark with no incidents on a very small human clinical trial outside of the U.S. involving seven patients. I’m told the company also has a few other yet to be released studies in the works, including a much larger human trial it plans to launch soon.

The company must still wait for FDA approval and is hopeful Ophthalmics will receive approval in Europe in the next 12 to 24 months, pending outcome of the larger trial. Wortz seemed positive about the process with the FDA, as well.

“We’re very excited about Scott Gotlieb at the FDA. He seems very pro device,” he said.