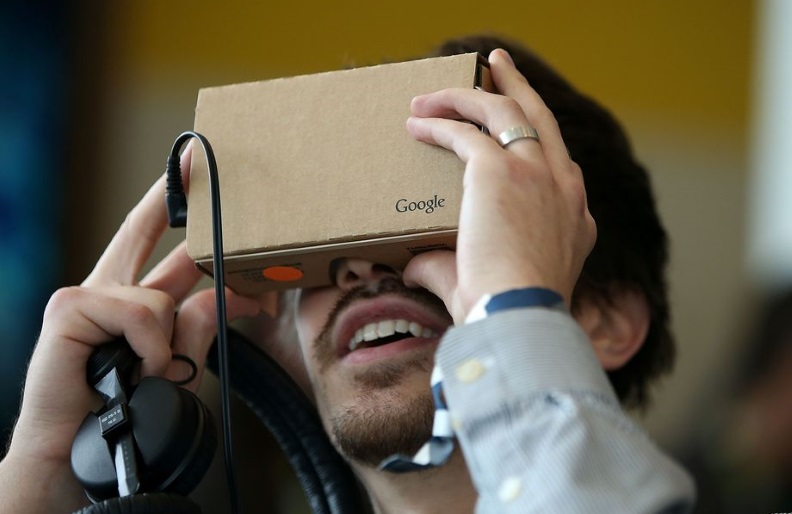 Google isn’t trying to hide what it’s doing with virtual reality. The long-term goal, said Google VR boss Clay Bavor on the latest episode of Too Embarrassed to Ask, is rethinking “any experience with sight and sound.”

“It’s not that hard to see where this all goes,” Bavor told Recode’s Kara Swisher and The Verge’s Lauren Goode. “Imagine you have some glasses and you put them on and you feel like you’re completely transported somewhere else: Courtside at a Warriors game, or Machu Picchu, or maybe back in a moment in your life that you’ve recorded.”

“I think that was an episode of ‘Black Mirror,’” Swisher said. “A bad one.”

“The reality is, we’re at the very beginning of the journey to that fully realized version of VR,” Bavor said.

Google consciously chose to make its first VR headset out of cardboard, he explained, because it’s more important to give people a “glimpse” of what will be possible than to push the bleeding edge from the get-go. But in certain areas, like 360-degree videos that can be viewed in a VR headset, the technology is near or already here.

“If you think about what do we use our phones’ cameras for, very few of the photos we take are artistically beautiful and well-composed — I’m speaking for myself,” Bavor said. “It’s about capturing a moment, capturing a memory, and we have line of sight to the first versions of VR cameras that let you record an experience. I’ve been using these in my own life — I have two young kids. The ability to step back into those moments and almost re-experience them, it’s very powerful.”

But consumer VR hardware is still considered a niche gaming experience, and some in the tech industry have started to say that augmented reality is the future instead. Google has been experimenting with Tango, its AR platform for certain mobile phones, since 2013, and Apple recently entered the fray by announcing its own platform, ARKit, for newer iOS devices.

Bavor said he doesn’t believe there has to be an either-or choice between VR and AR.

“They’re different points on the same spectrum of — I call it immersive computing,” he said. “I don’t really care about the label, but it’s this idea that you have computing and digital imagery that feels like it’s there. Virtual reality, everything is computer-generated; augmented reality, you have bits and pieces of digital information overlaid on your environment.”

The same device that transports you to Machu Picchu, he said, could also guide you around the world by turning into an AR assistant.

“One [use] I am very excited about is navigation,” Bavor said. “I spend my day in this building, I still can’t find all the conference rooms. Imagine that you could just look through your phone: ‘Oh, your next meeting is over there.’ Or you get out of a taxi or an Uber; you’re disoriented. It could just say ‘You’re over there,’ [and] overlay footsteps on the ground, leading the way.”

This article was originally published by recode. Read the original article.