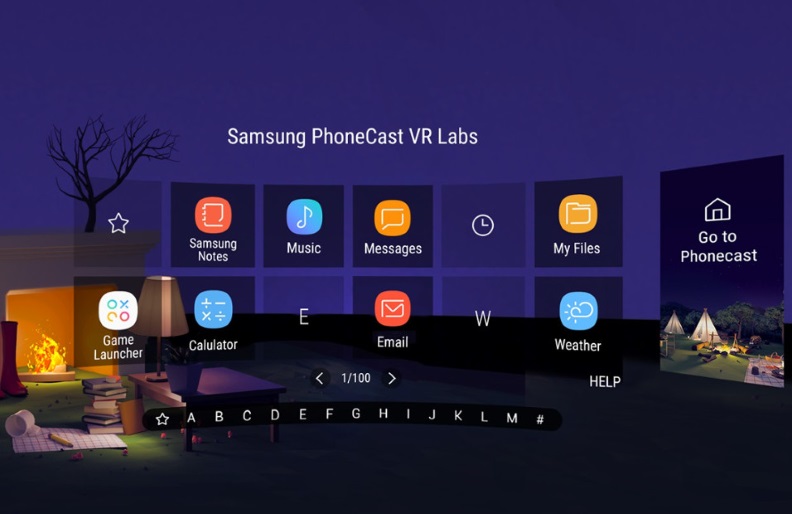 Virtual reality is fun and entertaining but hardly useful when it comes to getting real-world things done, it isn’t of much help. At least with the current state of technology. In the meantime, however, users can have an approximation of productivity in virtual reality by having their non-gaming software brought before their eyes. That is exactly what the Samsung PhoneCast VR app is trying to do by making some “2D”, a.k.a. flat, regular, and boring apps, available on the Gear VR headset.

PhoneCast VR has actually been around for a while but it’s finally getting some well deserved attention, and hopefully more polish. Like anything with the word “cast” these days, the app basically casts your phone’s screen into VR. It would be the virtual reality equivalent of projecting a phone’s screen to a wall. In this case, however, the wall is a 200-inch virtual screen set “9 feet” from your eyes.

The app was initially intended to get popular video apps and streaming services to the Gear VR platform without having to specifically write specific VR apps for those. Such apps included services like Vudu, go90, Hulu as well as apps like VLC, Plex, and Kodi. A new update, however, expands the app selection to more than just entertainment.

Gear VR users, specifically those with Galaxy S8 and S8+ phones, can head over to the app’s Labs section and see a very short lits of regular phone apps that can be viewed and used in VR. That list, unsurprisingly, is composed of mostly Samsung’s own native apps like Messages, Calculator, and Email. How usable those are, without a handy keypad or even keyboard, remains to be seen. No pun intended.

Phone-based virtual reality, like the Oculus-powered Gear VR and Google’s Daydream VR, have so far remained as novelties even compared to their standalone VR counterparts. With the mobile industry’s increasing interest in augmented reality, there might be a greater need for VR proponents to put their best foot forward. PhoneCast’s 2D app support is a step in the right direction, but a very small, and exclusive, step at that.

This article was originally published by SlashGear.