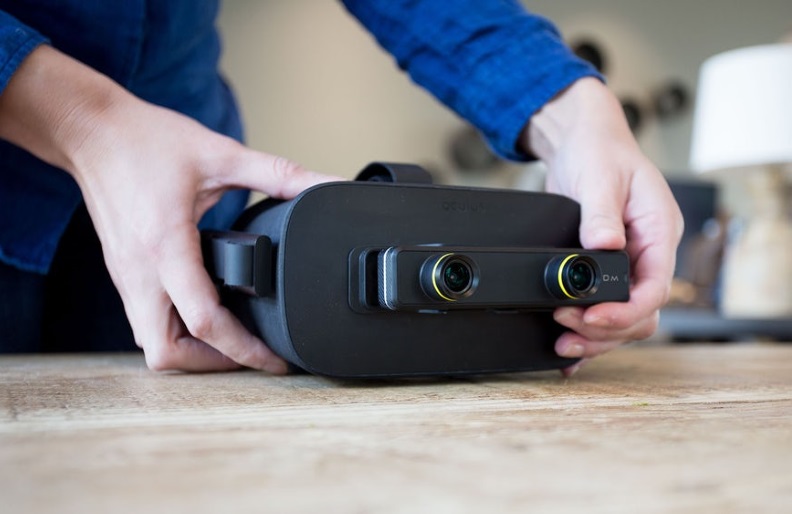 By themselves, the HTC Vive and the Oculus Rift create self-contained, fully digital virtual reality spaces, but the new ZED mini attachment adds an augmented reality twist. It sits on the front of a Rift or a Vive, feeding in a view of the real world that can be mixed with computer graphics.

So you might have drones flying around your office space, or a huge virtual television screen that can be fitted to your actual wall, or a game that’s mapped out on the floor in front of you – all the tricks that AR is already doing.

The ZED mini device is actually two cameras 65 mm (2.56 inches) apart, designed to mimic the human eyes. They can sense user position and depth, so digital graphics can be programmed to interact with real world objects in a way that looks and feels genuine, complete with realistic lighting.

Support for the Oculus Rift and HTC Vive controllers is baked in, and thanks to the object tracking the two cameras are capable of, you can even use your hands to bat away laser fire or make selections from a menu floating in front of your face.

All of this stereoscopic video and depth information is fed through a USB-C connection into the Vive or Rift, at a 720p resolution running at 60 frames-per-second. That’s not the maximum resolution these headsets are capable of when they’re rendering VR worlds, but if apps don’t need the high FPS rate then the resolution can be upped to the full 2k.

The attachment also supports a 100-degree field of view and inside-out tracking, which means you don’t need the room trackers that come with the Vive and Rift to work out your position in ZED mini-compatible apps – the data coming through the cameras is enough to calculate where you are in the world.

Fully fledged AR headsets like the Microsoft Hololens are on the way, but progress is slow. The ZEN mini is an interesting stopgap to use in the meantime, while we wait for the next wave of AR glasses to hit the market.

As always, developer support will be crucial. ZED mini maker Stereolabs says 30,000 app makers are already using its existing SDK, built for the original ZED camera, and an updated version will be pushed out soon. It’s bundling a handful of demos with the ZED mini, but Rift and Vive users will want to see some compelling games and experiences appear before they splash out on the hardware.

There’s no doubt that Apple’s bundling of ARKit in iOS 11 has sparked a fresh wave of interest in augmented reality, and in the future it’s likely that the best headsets will be able to switch between AR and VR quite easily. Until then, the ZED mini offers the best of both worlds, provided we see enough titles written for it.

The ZED mini can be preordered now for US$449 and ships on December 18. You can a taste of what’s on offer in the video below.