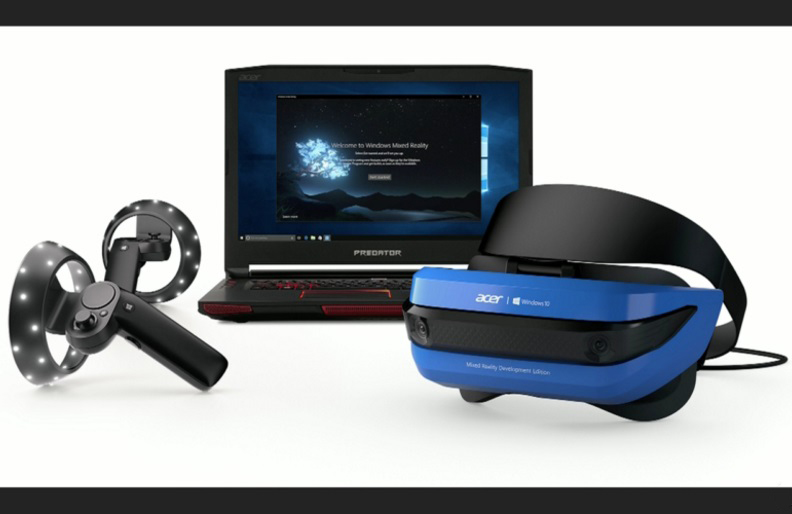 $399 bundles will also include motion controllers.

When Microsoft first unveiled the Windows 10 Creators Update last year, a big focus was put on the virtual reality capabilities, with Redmond promising a range of VR headsets with prices starting at just $299. When the Creators Update actually arrived in March this year, however, those VR capabilities were only visible if you enabled developer mode; they were there for developers, but not for the general public. The Fall Creators Update, due to be finalized next month, will remove the developer mode restriction, opening up Microsoft’s 3D platform to all.

In time for this year’s holiday season, there will be $299 headsets and $399 headset-and-motion-controller bundles, using Microsoft’s new motion controllers. Aside from the price, the Windows platform has a few features that make it stand out from SteamVR and the HTC Vive and Facebook’s Oculus Rift. The first is substantially easier setup, as the Windows platform doesn’t need fixed base stations for position tracking. Instead, it uses “inside out” tracking; it combines acceleration input from accelerometers with visual input from cameras embedded in the headsets to provide motion tracking. This means that it doesn’t need base stations on the walls, nor does it need the laser-based tracking used in the HoloLens headset.

The same tracking system is used for the motion controllers; they include embedded accelerometers, and this data is combined with the camera data (since most of the time your hands will be on the edge of your field of view), and reverse kinematic models (which is to say: since you’re holding the controllers, their movements are limited by human anatomy). The Microsoft controllers are more complex than those used by the HTC Vive, with more buttons and controls on them; they’re also asymmetric, with a dedicated left hand and right hand controller.

The second big feature is greatly diminished hardware requirements. Microsoft is offering two logo programs. “Windows Mixed Reality PCs” will use integrated graphics (Intel Skylake or better) and be able to drive the headsets at 60 frames per second. “Windows Mixed Reality Ultra PCs” will use discrete graphics processors and drive the headsets at 90 frames per second. As well as the higher frame rates, Ultra systems will have a slightly larger field of view. They’ll also be able to mirror the headset’s picture on-screen so that bystanders can watch what you’re seeing in VR.

Microsoft is also announcing a partnership that may come as a surprise: games built for Valve’s SteamVR platform will run on and be compatible with the Windows Mixed Reality headsets. This means that there’s an existing library of software that’ll work on day one.

I had the opportunity to use a recent version of Microsoft’s platform last week. Minecraft in VR ran well with integrated graphics when paired with an Xbox controller and feels like it could be an obvious hit come Christmastime. On an Ultra system I used Microsoft’s motion controllers and played a few games. The standout was Superhot VR: the novel first-person shooter really comes alive when you can physically dodge bullets.

Microsoft is also promising that a future Halo title will support virtual reality.