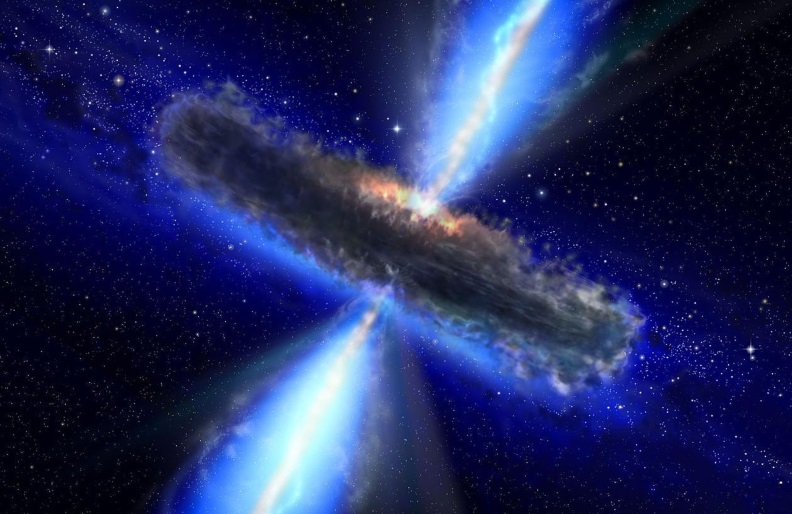 The universe’s missing matter has been found, and it’s floating between the stars.

Researchers who study the ancient history of the universe know how much ordinary matter — matter that makes up baryons, a class of subatomic particles that includes protons and neutrons — the universe created during the Big Bang. And researchers who study the modern universe know how much ordinary, baryonic matter humans can see with telescopes. [Strange Quarks and Muons, Oh My! Nature’s Tiniest Particles Dissected]

But until recently, those numbers didn’t match up: A full third of the universe’s original baryonic matter was missing. Now, thanks to a clever observation involving an incredibly bright black hole, an international team of researchers says they’ve found it.

The missing baryons, the researchers wrote in a study published today (June 21) in the journal Nature, have been hiding out as thin, hot clouds of oxygen gas floating between the stars. The gas is highly ionized, meaning that most of its electrons are missing, and it has a strong positive charge.

“We found the missing baryons,” Michael Shull, an astronomer at the University of Colorado, Boulder and a co-author on the paper, said in a statement.

The signal of the oxygen was too strong and consistent to come from random fluctuations in the quasar’s light, the researchers wrote. The astronomers also ruled out the possibility of a faint galaxy causing the oxygen’s shadow.

Since at least 2011, researchers have suspected that the missing baryons might be hiding out in this material, called the warm-hot intergalactic medium (WHIM), but the WHIM is difficult to observe directly. To spot the gas hiding there, they had to come up with a clever trick.

Far from Earth, there are black holes sucking up huge amounts of matter. That matter glows very bright, and telescopes on this planet can spot it. Researchers call these sorts of black holes quasars — and they’re the brightest objects in the universe. That means that light from quasars has “a high signal to noise ratio,” the researchers wrote in the paper, meaning in this case that it’s easy to see if something obscures it.

Pointing a telescope at a quasar not only tells astronomers about the object itself, but also reveals something about whatever’s floating between the quasar and the telescope. In this case, that something was a filament of the WHIM.

By careful observation of how the WHIM obscured and changed light emanating from the quasar as it made its way into the lenses of two telescopes, the researchers were able to figure out what the WHIM was made of. The answer, it turned out, was oxygen, heated to nearly 1.8 million degrees Fahrenheit (1 million degrees Celsius).

These missing baryons aren’t the same thing as dark matter, which researchers believe exists, thanks to its gravitational influence on other stars. That matter is thought to exist in the form of particles more exotic than simple baryons.

In a statement, the researchers said they were able to extrapolate from the observed WHIM how much baryonic matter in the form of oxygen floats elsewhere in the universe as the WHIM. To confirm and refine their observations, they said, they plan to point their telescopes at other quasars and observe the WHIM obscuring them.