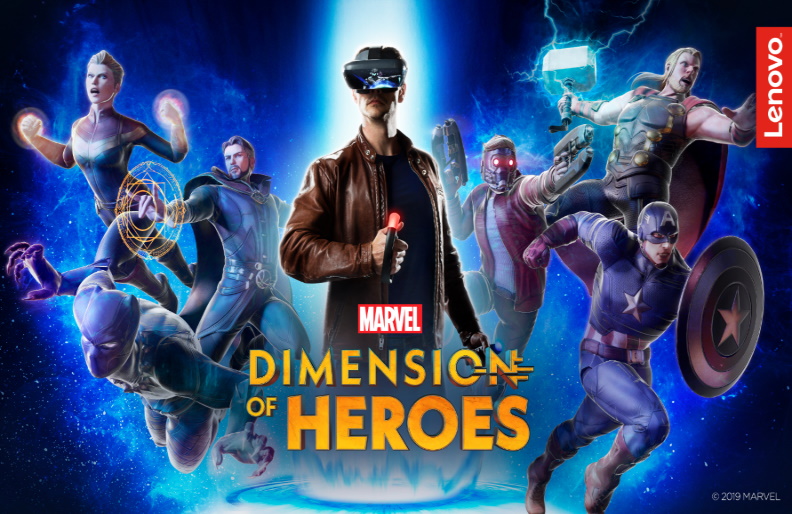 Lenovo has once again teamed up with Disney to bring one of the studio’s iconic franchises to augmented reality (AR). After first launching the “Star Wars: Jedi Challenges” AR headset in 2017, the two companies are back with a new “Marvel Dimension of Heroes” experience running on slightly revamped hardware.

Now called the Lenovo Mirage AR headset, the device once again relies on a consumer’s phone and an app that can be downloaded for free in the form of a free Android or iPhone smartphone app.

And while the first iteration of the headset shipped with lightsaber controllers, this new version comes with a pair of more generic grip controllers that can be used to power a variety of games.

When Lenovo came out with the first iteration of the headset, the two companies tried a variety of games, including their own take on holochess. Turns out that players care a lot more about fighting Stormtroopers than playing chess in AR, which is why the two companies refocused on life-sized battles for their new collaboration.

The AR game has three modes. The most exciting one is the co-op mode, where you can battle villains while physically standing next to a friend and competing to be the strongest, just like a real Avenger. However, each player has to have a headset, two controllers and their own tracking beacon to play, so while the most exciting, it’s also the least practical.

The game also has a story mode, where you play as one of the six Avengers and fight a surprise attack from Doctor Strange villain Dread Dormammu who’s teamed up with Thor’s mischievous brother, Loki, Guardians of the Galaxy villain Ronan the Accuser, Captain America foe Winter Soldier and overall Avengers arch nemesis Ultron Prime.

Finally, survival mode lets you play as an Avenger trying to survive long as possible for the glory of the global high score board.

If Dimension of Heroes proves anywhere near as popular as the Marvel movies–and is enough to drive fans to a $250 product–we wouldn’t be surprised to see more AR games, perhaps of different franchises, debut to give the Mirage AR enough punch to win over gamers. But with just two games under its belt so far, it’s unclear if assembling the Avengers will be enough.

The move towards more universal controllers, and the branding of the headset as “Mirage AR” also suggests that Lenovo may be working on ways to get additional to the device. Razali declined to comment on the company’s future plans, but one could imagine a number of other games that could work well on this platform — including, perhaps, a few more iconic Disney heroes.