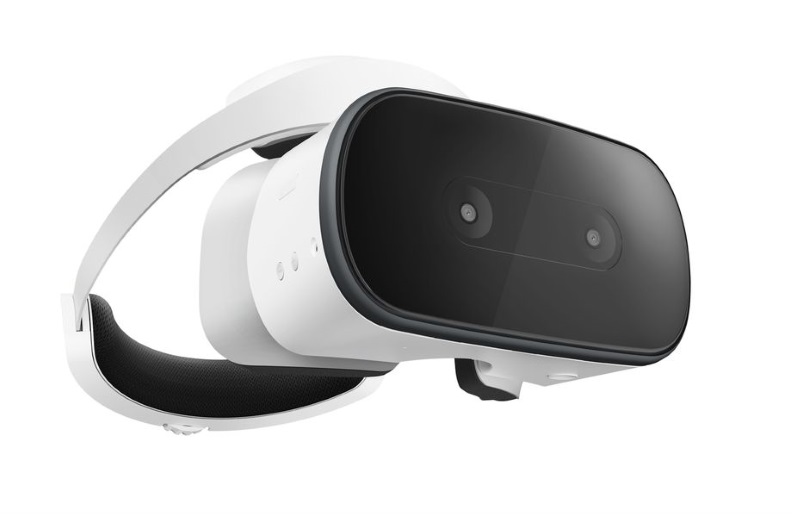 The Mirage Solo from Lenovo is the first virtual reality headset that has actually gotten me excited in a long time.

The Mirage Solo is a $399.99 standalone VR headset — which means it requires no computer or phone to play — that offers full head tracking, a big step up from the $199.99 Oculus Go. The head tracking, care of Google’s WorldSense technology, allows you to move your head around in full 3D space. That means you can lean forward to look closer at something in the world, or even stand in your tiptoes to get a better view of something in virtual reality. Software has to support the technology for the head tracking to work — the Google Play store accessed through the headset has a special section for apps that are ready to go — but all Daydream games are playable through the headset.

The WorldSense system also utilizes two cameras on the front of the hardware, which gives it a wide-eyed, surprised expression.

This may seem like just another bullet point on the box if you’ve never spent a lot of time in VR, but the addition of head tracking makes it much easier to pretend you’re somewhere else. It’s the sort of thing that’s hard to explain in words, but casual VR users will intuitively want it in their hardware. Getting head tracking working in a standalone headset immediately makes every portable VR product look like yesterday’s news. It’s a feature that’s going to have to be mandatory on everyone’s product moving forward.

It’s also an advantage that’s hard to communicate to someone who has never used a VR headset. Check out Lenovo’s official marketing. Does this make sense to you? Do you feel like it clearly explains the advantage of Lenovo’s headset?

This isn’t a room-scale headset though, although that limitation has been added by choice. It doesn’t seem like Google wants you standing up and walking around a virtual environment by default. If you get up and take more than a step or two in any direction, the view will often dim and you will be reminded to get back into the play area.

This feature can be turned off, however.

“Daydream Standalone automatically enables a safety fog to restrict tracking and keep the user in a smaller space,” Google’s official documentation states. “All end users will have the safety fog turned on. You can turn off the safety fog in developer mode for development purposes.”

This all makes sense — without any way of actually seeing out while wearing the headset, you’re likely to injure yourself if you start to walk around a room blind — but I sometimes found myself slipping out of the edges of an experience when I wanted to move around a bit more than the system let me. You can crouch, tilt your head to look around, or stretch to get a good look at something, but you’ll often be reminded that you’re in a relatively small box while wearing the Mirage Solo headset. I hope developers will begin to give players a bit more space in which to play.

The Mirage Solo is the first standalone Google Daydream headset, and the hardware uses the same control as the original Daydream headsets. The controller itself is limited to three degrees of movement, which means it’s locked into one position in VR, although you can turn it or twist it and use it almost like a laser pointer to interact with things in the world. Like all Daydream headsets, you’re also going to encounter a fair amount of drift in the controller and will want to reorient it frequently by holding the bottom button.

These control issues are a huge limitation, although not unexpected in a $399.99 standalone VR product, and the next big step forward is going to come from a platform that offers both head tracking and full freedom of movement for the controller or controllers. The inability to reach out into the world and grab something is often frustrating, and moving your head to look closer at the controller only to see it stay equidistant from your position is a bit of a buzzkill. 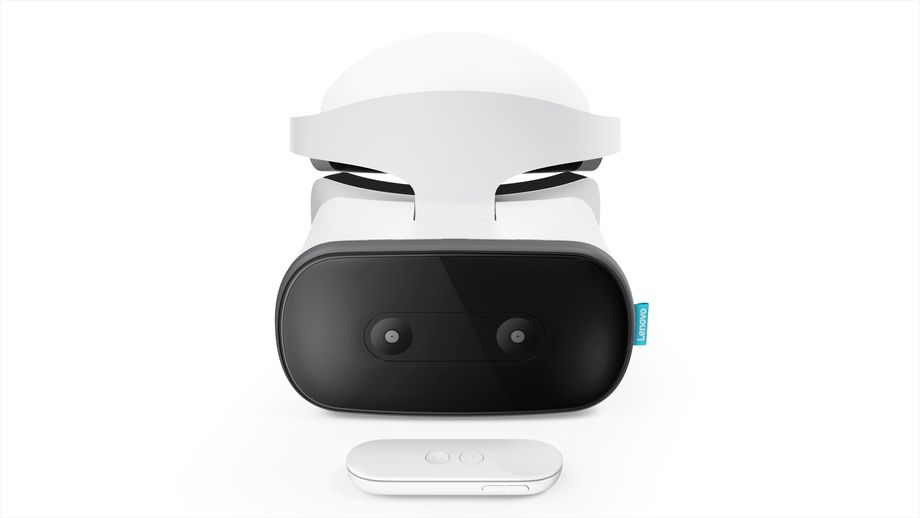 The rest of the headsets features are standard for modern VR headsets. There’s a large dial on the back on the strap to tighten or loosen the fit, and a button on the bottom of the hardware allows you to slide the optics away from or toward your face depending on how you’d like the whole thing to fit. You can easily wear glasses with the Mirage Solo, although a fair amount of light bleeds in from the sides when you do so. It’s a comfortable headset that’s very easy to wear and adjust.

You charge both the headset and the controller using a standard USB-C cable, which is included, and the system comes with 64GB of storage but can be expanded using an SD card. The battery will last between two to three hours, depending on what you’re playing or watching. I never felt constrained by that time limitation.

The volume controls and the power button on the right of the headset and are easy to find even when inside of virtual reality. There are no included speakers, and you’ll want something better than the earbuds that are provided in the package. But there are no big surprises here, neither good nor bad. It’s a conventional setup in a time when design orthodoxy in VR equipment is starting to take hold.

So what does this all mean?

The Mirage Solo is so exciting not because it’s going to be a mainstream product — this is still something that will likely be limited to true believers, enthusiasts and developers — but because Lenovo has leveraged Google’s platform and technology to create a headset that feels like it’s only a few steps away from that mythical mainstream product.

Full head tracking in a standalone headset at this price, and at this quality level, is an impressive accomplishment. I lost tracking a few times when testing the headset, but the hardware quickly found itself again and began working almost instantly. It’s still a weird feeling for a moment, as if suddenly the movement of the world around you is pinned to your skull.

And the software support in general is still scattershot, as it is on all VR platforms. There’s some good stuff here, including a portable version of Rez Infinite that’s absolutely amazing, but the general media apps and 360 degree video applications don’t do much to take advantage of the head tracking. Narrows was probably my favorite game for the headset, and it felt great to lean close to and explore the world of my tiny boat.

This isn’t the virtual reality headset you’re going to tell your mom or dad to buy, and we’re probably a few years away from that product being released. But the idea of a room-scale, standalone VR headset with full controller tracking that is also reasonably priced felt like it was a long way off last year.

The Mirage Solo is a product you can buy right now (although lord knows something even better and possibly cheaper is probably less than a year away from launch) that shows the future might be slightly closer than we had thought.