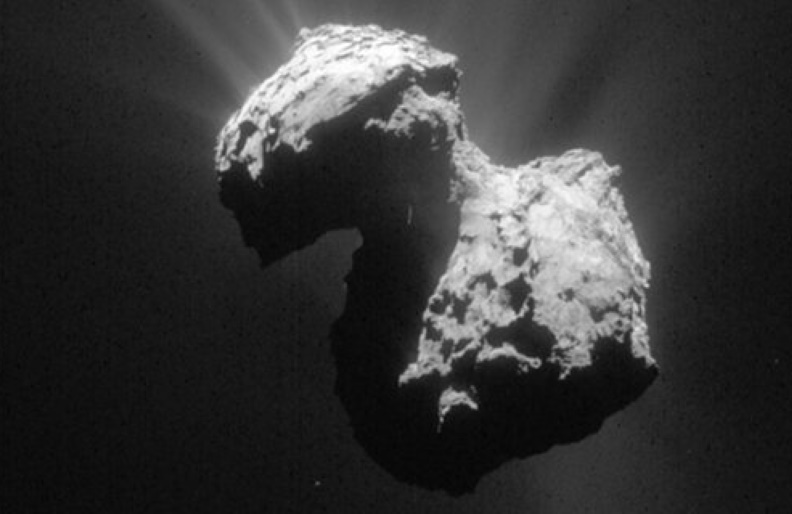 All comets might share their place of birth, new research says. For the first time ever, astronomer Christian Eistrup applied chemical models to fourteen well-known comets, surprisingly finding a clear pattern. His publication has been accepted in the journal Astronomy & Astrophysics.

Comets: balls of ice or more?

Comets travel through our solar system and are composed of ice, dust, and small rock-like particles. Their nuclei can be as large as tens of kilometers across. “Comets are everywhere, and sometimes with very funky orbits around the Sun. In the past, comets even have hit the Earth,” Christian Eistrup says. “We know what comets consist of and which molecules are present in them. They vary in composition, but are normally seen as just one group of icy balls. Therefore, I wanted to know whether comets are indeed one group, or whether different subsets can be made.”

A new take on comets

“What if I apply our existing chemical models to comets?”, Eistrup thought during his Ph.D. at Leiden University. In the research team at Leiden Observatory, which included Kavli Prize winner Ewine van Dishoeck, he developed models to predict the chemical composition of protoplanetary discs—flat discs of gas and dust encompassing young stars. Understanding these discs can give insight into how stars and planets form. Conveniently, these Leiden models turned out to be of help in learning about comets and their origins.

“I thought it would be interesting to compare our chemical models with published data on comets,” says the astronomer. “Luckily, I had the help of Ewine. We did some statistics to pin down if there was a special time or place in our young solar system, where our chemical models meet the data on comets.” This happened to be the case, and to a surprising extent. Where the researchers hoped for a number of comets sharing similarities, it turned out that all fourteen comets showed the same trend. “There was a single model that fitted each comet best, thereby indicating that they share their origin.”

And that origin is somewhere close to our young Sun, when it was still encircled by a protoplanetary disc and our planets were still forming. The model suggests a zone around the Sun, inside the range where carbon monoxide becomes ice—relatively far away from the nucleus of the young Sun. “At these locations, the temperature varies from 21 to 28 Kelvin, which is around minus 250 degrees Celsius. That’s very cold, so cold that almost all the molecules we know are ice.

“From our models, we know that there are some reactions taking place in the ice phase—although very slowly, in a time-frame of 100,000 to 1 million years. But that could explain why there are different comets with different compositions.”

But if comets come from the same place, how do they end up in different places and orbits in our solar system? “Although we now think they formed in similar locations around the young Sun, the orbits of some of these comets could be disturbed—for instance by Jupiter—which explains the different orbits.”

As befits a scientist, Eistrup places some side-notes to his publication. “With only fourteen comets, the sample is quite small. That’s why I’m currently hunting for data on many more comets, to run them through our models and further test our hypothesis.” Eistrup also hopes that astronomers that study the origin of our solar system and its evolution can use his results. “Our research suggests that comets have formed during the period they’re studying, so this new information might give them new insights.”

He is also keen to get in touch with other comet researchers. “Because we show a new trend, I would like to discuss what other astronomers think of our research.”

The seeds of life

Comets and life on Earth, they go hand in hand. “We still don’t know how life on Earth began. But the chemistry on comets could lead to the production of organic molecules, including some building blocks for life. And if the right comet hits the right planet, with the right environment, life could start growing,” Eistrup concludes. So, interestingly, understanding the birth of comets potentially could help us understand the birth of life on Earth.