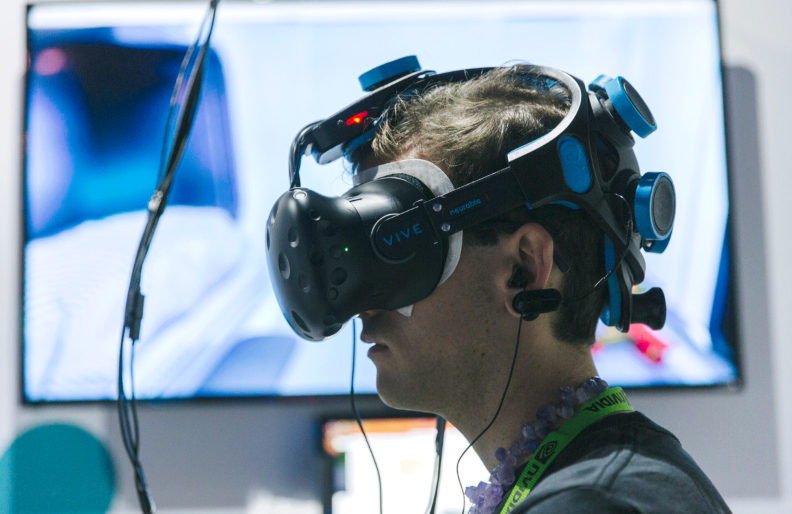 Part of the appeal of virtual reality (VR) is the ability to control the digital world using only your hands and simple movements. Startup company Neurable, in collaboration with the Madrid-based company Estudiofuture, is eliminating controllers and hand movements altogether with their first game: Awakening, which aims to show what it’s like to have telekinetic abilities.

Neurable Vice President Michael Thompson announced the game last week ahead of its appearance at the computer graphics conference SIGGRAPH. The game, set to be released in VR arcades in 2018, has a story similar to that of the Netflix series Stranger Things: “You are a child held prisoner in a government science laboratory. You discover that experiments have endowed you with telekinetic powers. You must use those powers to escape your cell, defeat the robotic prison guards, and free yourself from the lab.”

Though Neurable’s technology might be exciting for gamers, such brain-computer interfaces (BCIs) are being researched for much more widespread applications: from neuroscience research to mind-controlled web development, to brainwave-based marketing and tracking brain activity the way many track their steps. The technology is also being developed to help those with locked-in syndrome — unable to move or talk — communicate with the outside world.

Some researchers have expressed skepticism that this technology can ever be commercially viable; Jack Gallant, head of UC Berkeley’s Neuroscience Lab, told the Guardian it was “conceptually trivial but just about impossible to do” due to the difficulty of decoding brain signals through the thick human skull. But Alcaide seems to think the ease with which people have used Awakening bodes well for the tech’s future.

“A lot of people come in highly skeptical, because BCI has been a disappointment so many times before,” Alcaide told IEEE. “But as soon as they grab an object, there’s a smile that comes over their faces. You can see the satisfaction that it really works.”