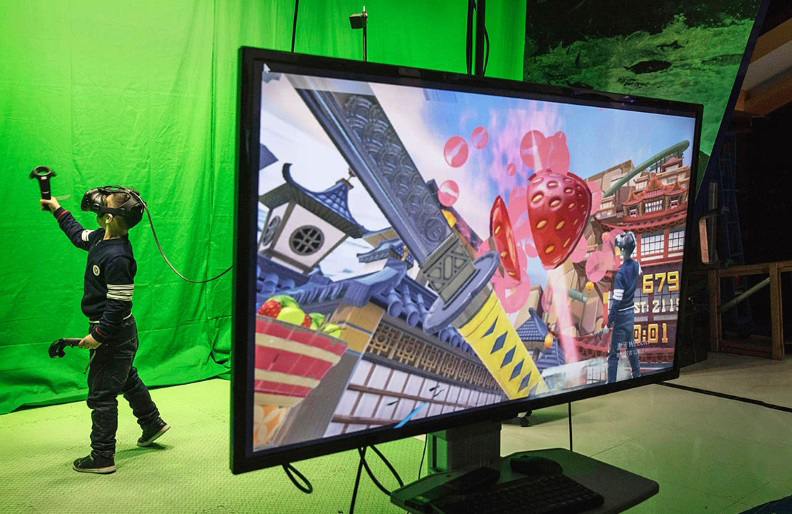 VR has been more about hype than substance. Will that change?

JUSTIN WILLIAMS takes off a virtual-reality (VR) headset and wobbles away from a demo area at E3, the world’s largest gaming convention, in Los Angeles. The bottoms of his feet and calves are “on fire,” he says. Mr Williams, a 32-year-old former marine, was playing “Sprint Vector”, a VR running game: players swing hand-held controllers to simulate motion. Though he has been standing in one place, his brain believes he has just run for several miles.

This sensation of complete immersion is called “presence”. Boosters of VR say it is what will drive the technology’s mass adoption, in time. When Facebook bought Oculus, a VR startup, for $2bn in 2014, and sent interest in the technology rocketing, it was this feeling of being present that Mark Zuckerberg, the social network’s boss, described as “incredible”.

Yet despite many pronouncements that 2016 was the year of VR, a more apt word for virtual reality might be absence. Of the 6.3m headsets that were shipped last year, most were cheaper, less sophisticated devices, such as the Samsung Gear VR, that rely on smartphones to act as their screens, according to SuperData, a games-market research firm. Only 200,000 high-end Oculus Rift headsets were sold globally (see chart). In the end, SuperData revised its first forecast, made in January last year, that total revenue from VR software and hardware would reach $5.1bn in 2016, down to $3.6bn. The actual figure for total worldwide revenue was a meagre $1.8bn. The expectations set for VR were plainly unrealistic, says George Jijiashvili, an analyst with CCS Insight, a research company. Even in the gaming industry, which has been quick to adopt the technology, people noted that Microsoft’s release of its new Xbox gaming console at the convention made no mention of VR. Oculus did not even set out a stall. 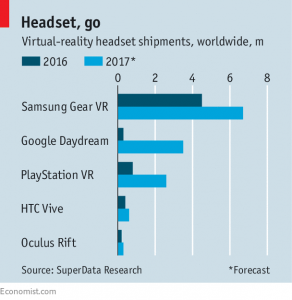 Several obstacles still stand in the way of widespread use. The gear is expensive and clunky, and requires a powerful computer or gaming console to function. Consumers are hesitant to splash out on expensive kit when there isn’t a lot to do with it; developers are reluctant to spend resources making games for a tiny market. Developers are also held back by the sheer variety of headsets, which means they need to code content several times for different platforms. The way in which users must wave around hand-held controllers such as HTC’s “wands” to input movements falls short of the promise of VR, which will eventually use sensors to convey bodily movement.

And yet signs of progress are also visible. Despite the lack of splashy announcements at E3, there were plenty of smaller companies eager to show off their wares. More than 120 of the 293 exhibitors, mostly gaming-related companies, had some sort of VR product, up from 53 last year, 27 in 2015, six in 2014 and none in 2013. Their offerings included everything from “haptic” feedback (giving VR users a sensation of touch) to advertising inside VR content.

Some tech giants still see VR as integral to their future. Despite its underwhelming sales of Oculus Rift, Facebook is convinced that VR is “the next major computing platform”. It recently hired Hugo Barra, a well-known former Google and Xiaomi executive, to head up its VR division. It has a new offering, “Spaces”, which is a place to socialise with friends in VR that allows users to create avatars, to express some emotion through facial expressions, answer video calls, share photos and take selfies. As a first go, it is surprisingly compelling.

Other tech firms reckon VR may be a stepping stone to a bigger prize: augmented reality (AR), which allows users to overlay the digital world onto the real one. AR has more everyday applications, such as navigation, than VR, which is expected to be used chiefly for leisure activities and in industry. Apple believes that AR will become a bigger phenomenon than VR.

Google is trying both. It had a salutary experience with its “Glass” headsets, a much-maligned set of primitive AR spectacles that it launched in 2013 only to withdraw them from sale two years later. It has now developed and started selling “Daydream” mobile headsets, a cheap smartphone-based virtual reality kit, and has invested in several virtual reality and AR companies, such as Magic Leap, an AR startup. It has bought Owlchemy Labs, the creator of “Job Simulator”, a VR game set in a future in which humans no longer need to work thanks to machines. Microsoft is betting on what it calls “mixed reality”, arguing that it is pointless to draw a line between AR and VR. Although it did not emphasise virtual reality at E3, it is enthusiastic about its potential on the Windows 10 operating system.

If virtual reality is to take off at last, tech-industry executives agree that avid gamers will be crucial. Such people tend to be early adopters of expensive new equipment, so they subsidise innovation. Games developers know how to engage players and keep them interested, and how to tell stories in a non-linear fashion. And they have for years created content in three dimensions, a basic requirement for VR. Indeed, virtual reality is integrating games and the broader technology industry as never before. “It’s like two continents that were apart, and continental drift is bringing them together,” says Neil Trevett of the Khronos Group, a non-profit industry group.

HTC developed its Vive headset in collaboration with Valve, a games developer and distributor. Google is funding independent games developers to boost the creation of content. When Apple introduced new virtual-reality and augmented-reality features at a conference for software developers last month, its emphasis was on games. Members of the Khronos Group, including Google and Apple as well as games firms such as Epic and Nintendo, are working on industry-wide standards.

New headsets from a variety of hardware firms—Acer, Asus, Dell, Lenovo and Hewlett-Packard—all running on Windows, are expected later this year. Many new games and entertainment products using VR (see article) are poised to go on sale. Better technology and more content will encourage gamers who were on the fence to join in, expanding the market and setting off a virtuous cycle, argues Dan O’Brien, head of VR at HTC. As part of that cycle, headsets will become smaller, cheaper and wireless. Some of those advances will come from China, which leads the world in the adoption of VR. Chinese firms have been quick to invest, and its hardware industry is churning out new products. Xi Jinping, the president, has mentioned virtual reality as important for economic growth.

Virtual reality also has new functions in business and beyond. Mr O’Brien says he receives many inquiries from carmakers, for example, which are using VR as a way quickly and cheaply to prototype and collaborate on new models of vehicles. Hospitals in America are experimenting with 3D models in VR as a way for doctors to get a closer look at tricky bits of bodies or to prep for surgery. The Pentagon is eyeing new VR technologies aimed at consumers as a cheap addition to its existing use of VR for training. The lessons from making shoot-’em-up games for bored teenagers could one day be applied to real training programmes for soldiers—as well as being useful for the doctors who come after. The VR industry has not yet fulfilled the hype. But the believers have not lost their faith.