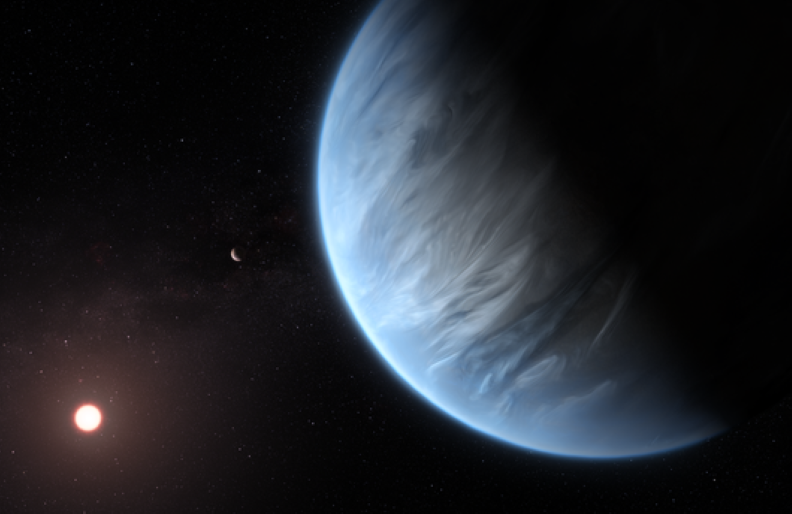 Twenty years ago, almost to the day, two competing teams of astronomers independently discovered the first known transiting exoplanet—a world that, viewed from Earth, passed across the face of its star, casting a shadow toward watchful telescopes here. Two decades later, transits have become the lifeblood of exoplanet studies, yielding thousands of worlds via space telescopes such as NASA’s Kepler and Transiting Exoplanet Survey Satellite (TESS) missions and allowing researchers not only to gauge a planet’s size and orbit but also its density and bulk composition. In short, transiting worlds have proved to be the keystones in the burgeoning search for Earth’s cosmic twins. Back in 1999, however, the notion that these exoplanetary shadows would be detectable at all was so fantastic that validating it took the separate efforts of two groups.

A similar scenario is now playing out again: Two scientific teams have announced their independent discovery of water—the foundation of biology as we know it—in the atmosphere of a transiting planet dubbed K2-18 b. The planet orbits in the habitable zone of its star, the sweet spot in which starlight may sufficiently warm a world to allow water to pool and flow on its surface. A milestone in the search for alien life, the result portends a near future in which astronomers will use new, advanced telescopes on the ground and in space to more deeply study the most promising planets around our sun’s neighboring stars.

“This is the only planet right now that we know outside the solar system that has the correct temperature to support water, that has an atmosphere and that has water in it,” says Angelos Tsiaras, an astronomer at University College London and lead author of one of the studies, which was published today in Nature Astronomy. Tsiaras and his colleagues used sophisticated computer models to tease out signs of water vapor on K2-18 b from data gathered by the Hubble Space Telescope, making the planet, he says, “the best candidate for habitability” presently known.

The Hubble data do not speak with significance about the volume of water on K2-18 b—in the planet’s upper atmosphere, either a whiff of moisture or an ocean’s worth would express a similar signal. Tsiaras and his colleagues suggest the water vapor could make up anywhere between a hundredth of a percent to half of K2-18 b’s atmosphere. Pinning down just how much water (as well as other gases, such as methane, carbon dioxide and ammonia) is there will require more broadband observations using future space facilities such as NASA’s James Webb Space Telescope, the European Space Agency’s Atmospheric Remote-Sensing Infrared Exoplanet Large-Survey (ARIEL) telescope and a nascent generation of extremely large ground-based telescopes.

K2-18 b is slightly more than twice the size of Earth and nearly nine times as massive, likely with a solid core of rock or ice surrounded by an oppressively thick envelope of hydrogen—and other gases, apparently including water vapor. Found by Kepler in 2015, the world nestles in a 33-day orbit around a dim, cool red dwarf star some 110 light-years away, in the constellation of Leo. That star shines with less than 3 percent the luminosity of our own sun, but because K2-18 b orbits so closely to it, the planet receives just 5 percent more starlight than our own. And because the planet transits, some of that starlight passes through its upper atmosphere en route to telescopes here, picking up and transmitting information about the cocktail of gases in K2-18 b’s air.

Eight different times between 2016 and 2017, a team led by Björn Benneke of the University of Montreal measured K2-18 b’s transitory atmospheric shimmer with the Hubble Space Telescope, as well as with Kepler and the Spitzer Space Telescope. Hubble data are often released to the public as soon as they are gathered, and in this case, that policy allowed Tsiaras and his co-workers to perform their study. Just like Tsiaras’s group, the separate analysis by Benneke’s team suggests the existence of a statistically significant fraction of water vapor in K2-18 b’s upper atmosphere—but also, uniquely, what the team argues are hints of liquid-water droplets condensing deeper down. That is, Benneke and his colleagues report evidence of clouds—and of rain. Their study has been posted on the preprint server arXiv.org and was submitted to the Astronomical Journal for peer-reviewed publication.

“Both studies show there is an atmosphere and water on this planet, which makes the result even stronger,” Benneke says. “Finding water vapor is great, but what is so special about K2-18 b is that our models suggest parts of its atmosphere have sufficient temperature and pressure for that vapor to form droplets of liquid water. And these, like in Earth’s atmosphere, will form clouds and fall as rain. Just as on Earth, there should be an interplay between condensation and evaporation, an active water cycle between the clouds and the gaseous part of the atmosphere.”

The atmospheric region in which the clouds may form, Benneke speculates, could be relatively comfortable, with a pressure of one Earth atmosphere and a temperature not far from that of a typical living room. “In many ways, this planet is not like Earth, but in others, it is very similar. There may be no meaningful ‘surface’ beneath the thick gas envelope. And even if there is, it would be subjected to very high pressures. It is implausible to imagine something like a human walking around down there—but maybe some sort of extreme microbe could live in those water clouds.”

Cloudy, with a Chance of Habitability

Some researchers call K2-18 b and its ilk “super Earths”; others prefer to call them “mini Neptunes.” But regardless of nomenclature, the most obvious fact about these objects is that none of them orbit our sun, despite being the most plentiful planetary type in the Milky Way. All we can really know of them currently comes from extrasolar studies. And so far, those studies show that most of these planets, somewhere in size between Earth and Neptune, are not very much like Earth at all.

“I like to call them ‘hybrid’ planets, these worlds with rocky cores and thick hydrogen envelopes,” Benneke says. “This is not a bare rock with a thin atmosphere like Earth, but this is also not a giant planet like Neptune or Jupiter.”

One appeal of studying such intermediate worlds—many more of which are already being uncovered by the ongoing TESS mission—is the possibility they will reveal something fundamental about how planets of all sizes come to be.

“We think that for planets somewhere around 1.8 times the size of Earth, there is a transition from rocky to gaseous worlds that takes place,” says Laura Kreidberg, an astronomer at the Center for Astrophysics at Harvard University and the Smithsonian Institution (CfA), who did not take part in the studies. “K2-18 b is close to that border, so [these studies] are giving us our first glimpse into the atmosphere of a world near this transition.”

Nikole Lewis, an astronomer at Cornell University, who was not involved in either paper, notes that this is not the first time signs of water vapor, clouds and perhaps even rain have been seen on worlds outside the solar system. But those earlier discoveries have come from K2-18 b’s larger, hotter cousins around other stars, worlds that are more firmly on the “Neptune” side of the planetary divide. “K2-18 b represents a great step on the path to probing cooler and smaller planets,” she says. “It has the potential to inform us about how atmospheres form and evolve for planets at or near the habitable zone around red dwarf stars, which will be important for understanding the potential habitability of smaller ‘Earth-sized’ planets.”

Most importantly, water vapor on K2-18 b would be the best evidence yet that small planets in the habitable zones of red dwarfs can possess atmospheres at all. In some respects, diminutive red dwarfs can punch well above their weight, emitting atmosphere-eroding amounts of radiation that peak early in the stars’ lives just when newborn planets may be most vulnerable. And the handful of earlier Hubble studies of tiny, close-in red dwarf worlds have been discouraging: Attempts to study the putative atmospheres of several potentially habitable planets transiting an ultradim red dwarf called TRAPPIST-1 provided inconclusive results. And a more recent probe of LHS 3844 b, a transiting red dwarf world a third larger in size than our own, suggested that planet may well have no air at all.

“The vast majority of the habitable space in the universe may be around red dwarfs, because these are the most common stars, and they happen to have lots of rocky planets really close to them,” says Nicolas Cowan, an astronomer at McGill University, who is unaffiliated with either of the new papers. “After the study showing LHS 3844 b looks like a dry, barren rock, some of us started getting worried. Maybe red dwarf worlds would turn out to be red herrings for astrobiology.”

That concern is why K2-18 b is “a huge deal,” Cowan says, despite its distinctly unearthly and somewhat unhospitable state. “It suggests the most common planetary real estate in the universe can also be habitable—not only with atmospheres but with water vapor, too.”

Even so, not everyone is convinced the claims of water vapor are much more than hot air. “The statistical significance of the claimed detection is not strong,” says David Charbonneau, an astronomer at CfA, who co-discovered the first transiting planet back in 1999. Unlike that finding, which was based on two distinct data sets, the new discovery that was shared between two teams relies on just one—from Hubble, which was never designed to perform such delicate, challenging measurements. “Yes, it is suggestive,” Charbonneau says. “But astronomers have been studying transiting planets for 20 years, so I think we are well past the epoch of ‘suggestive’ studies.”