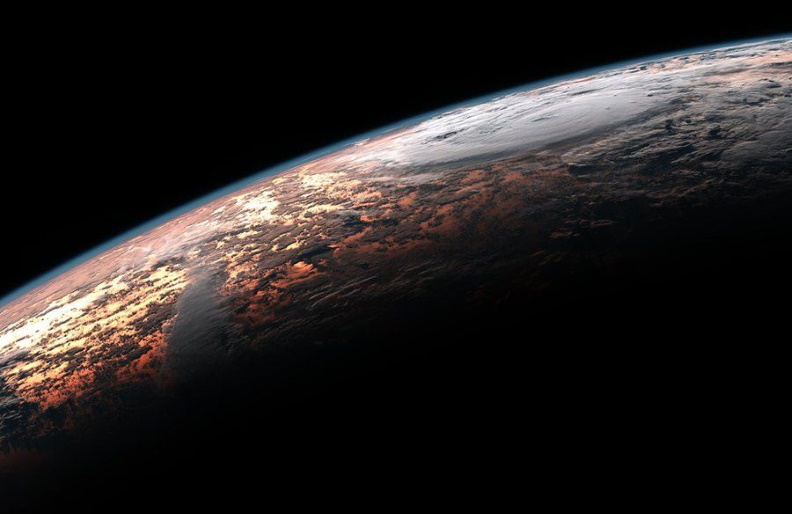 New research from astronomers at the University of Washington uses the intriguing TRAPPIST-1 planetary system as a kind of laboratory to model not the planets themselves, but how the coming James Webb Space Telescope might detect and study their atmospheres, on the path toward looking for life beyond Earth.

The study, led by Jacob Lustig-Yaeger, a UW doctoral student in astronomy, finds that the James Webb telescope, set to launch in 2021, might be able to learn key information about the atmospheres of the TRAPPIST-1 worlds even in its first year of operation, unless — as an old song goes — clouds get in the way.

“The Webb telescope has been built, and we have an idea how it will operate,” said Lustig-Yaeger. “We used computer modeling to determine the most efficient way to use the telescope to answer the most basic question we’ll want to ask, which is: Are there even atmospheres on these planets, or not?”

His paper, “The Detectability and Characterization of the TRAPPIST-1 Exoplanet Atmospheres with JWST,” was published online in June in the Astronomical Journal.

The TRAPPIST-1 system, 39 light-years — or about 235 trillion miles — away in the constellation of Aquarius, interests astronomers because of its seven orbiting rocky, or Earth-like, planets. Three of these worlds are in the star’s habitable zone — that swath of space around a star that is just right to allow liquid water on the surface of a rocky planet, thus giving life a chance.

The star, TRAPPIST-1, was much hotter when it formed than it is now, which would have subjected all seven planets to ocean, ice and atmospheric loss in the past.

“There is a big question in the field right now whether these planets even have atmospheres, especially the innermost planets,” Lustig-Yaeger said. “Once we have confirmed that there are atmospheres, then what can we learn about each planet’s atmosphere — the molecules that make it up?”

Given the way he suggests the James Webb Space Telescope might search, it could learn a lot in fairly short time, this paper finds.

Astronomers detect exoplanets when they pass in front of or “transit” their host star, resulting in a measurable dimming of starlight. Planets closer to their star transit more frequently and so are somewhat easier to study. When a planet transits its star, a bit of the star’s light passes through the planet’s atmosphere, with which astronomers can learn about the molecular composition of the atmosphere.

Lustig-Yaeger said astronomers can see tiny differences in the planet’s size when they look in different colors, or wavelengths, of light.

“This happens because the gases in the planet’s atmosphere absorb light only at very specific colors. Since each gas has a unique ‘spectral fingerprint,’ we can identify them and begin to piece together the composition of the exoplanet’s atmosphere.”

Lustig-Yaeger said the team’s modeling indicates that the James Webb telescope, using a versatile onboard tool called the Near-Infrared Spectrograph, could detect the atmospheres of all seven TRAPPIST-1 planets in 10 or fewer transits — if they have cloud-free atmospheres. And of course we don’t know whether or not they have clouds.

If the TRAPPIST-1 planets have thick, globally enshrouding clouds like Venus does, detecting atmospheres might take up to 30 transits.

“But that is still an achievable goal,” he said. “It means that even in the case of realistic high-altitude clouds, the James Webb telescope will still be capable of detecting the presence of atmospheres — which before our paper was not known.”

Many rocky exoplanets have been discovered in recent years, but astronomers have not yet detected their atmospheres. The modeling in this study, Lustig-Yaeger said, “demonstrates that, for this TRAPPIST-1 system, detecting terrestrial exoplanet atmospheres is on the horizon with the James Webb Space Telescope — perhaps well within its primary five-year mission.”

Lustig-Yaeger’s co-authors, both with the UW, are astronomy professor Victoria Meadows, who is also principal investigator for the UW-based Virtual Planetary Laboratory; and astronomy doctoral student Andrew Lincowski. The work follows, in part, on previous work by Lincowski modeling possible climates for the seven TRAPPIST-1 worlds.

“By doing this study, we have looked at: What are the best-case scenarios for the James Webb Space Telescope? What is it going to be capable of doing? Because there are definitely going to be more Earth-sized planets found before it launches in 2021.”

The research was funded by a grant from the NASA Astrobiology Program’s Virtual Planetary Laboratory team, as part of the Nexus for Exoplanet System Science (NExSS) research coordination network.

Lustig-Yaeger added: “It’s hard to conceive in theory of a planetary system better suited for James Webb than TRAPPIST-1.