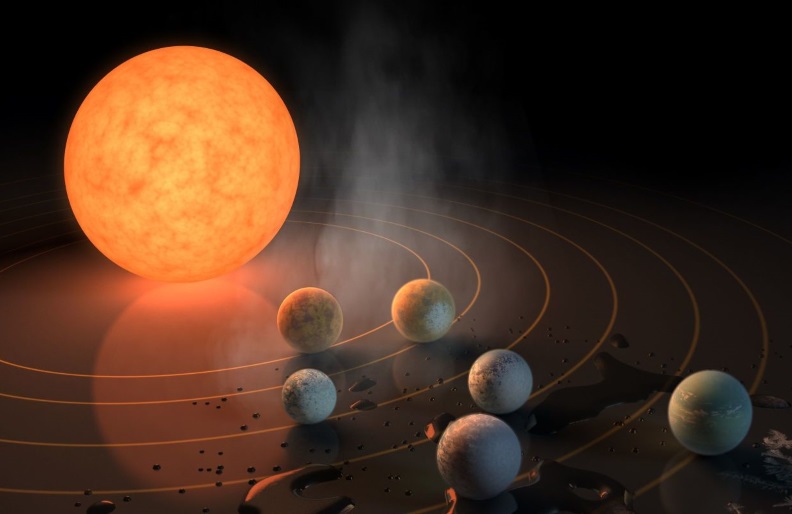 Several of the planets orbiting a nearby star may harbor “substantial amounts” of water, astronomers say, including three planets situated in a habitable part of the star’s solar system.

The star—called TRAPPIST-1—is an ultracool dwarf star 40 light years away. It is orbited by seven Earth-size planets, according to the Hubble Space Telescope.

Following the discovery of the planets in February, an international team of astronomers used the telescope’s imaging spectrograph to measure the amount of ultraviolet radiation received by individual planets in the system.

As lower-energy ultraviolet radiation warms a planet, it breaks up water molecules into hydrogen and oxygen. These can then escape as higher-energy radiation heats the upper atmosphere of a planet.

The astronomers sought to predict how much water each planet may have lost over its history. While their results are not conclusive, the outer planets would have lost far less water than the inner planets, based on the amount of radiation they received.

This includes three in the “habitable zone”—the part of the solar system where atmospheric pressure would be at the right level to allow a planet to sustain liquid water. If these results are confirmed, those planets would fulfill one condition for livability for humans.

The solar system’s inner planets, however, could have lost more than 20 Earth-oceans-worth of water during the last eight billion years.

The astronomers stress, however, that more work is needed to achieve conclusive results.

The Swiss astronomer Vincent Bourrier, who led the team, said, “While our results suggest that the outer planets are the best candidates to search for water with the upcoming James Webb Space Telescope, they also highlight the need for theoretical studies and complementary observations at all wavelengths to determine the nature of the TRAPPIST-1 planets and their potential habitability.”