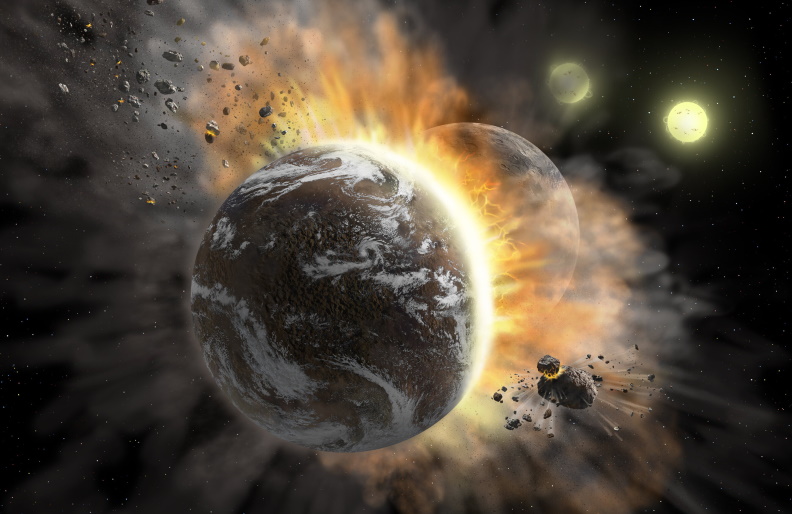 A dramatic glimpse of the aftermath of a collision between two exoplanets is giving scientists a view of what can happen when planets crash into each other. A similar event in our own solar system may have formed the moon.

Known as BD +20 307, this double-star system is more than 300 light-years from Earth with stars that are at least one billion years old. Yet this mature system has shown signs of swirling dusty debris that is not cold, as would be expected around stars of this age. Rather, the debris is warm, reinforcing that it was made relatively recently by the impact of two planet-sized bodies.

A decade ago, observations of this system by ground observatories and NASA’s Spitzer Space Telescope gave the first hints of this collision when the warm debris was first found. Now the Stratospheric Observatory for Infrared Astronomy, SOFIA, revealed the infrared brightness from the debris has increased by more than 10 percent—a sign that there is now even more warm dust.

Published in the Astrophysical Journal, the results further support that an extreme collision between rocky exoplanets may have occurred relatively recently. Collisions like these can change planetary systems. It is believed that a collision between a Mars-sized body and the Earth 4.5 billion years ago created debris that eventually formed the moon.

“The warm dust around BD +20 307 gives us a glimpse into what catastrophic impacts between rocky exoplanets might be like,” said Maggie Thompson, a graduate student at the University of California, Santa Cruz, and the lead author on the paper. “We want to know how this system subsequently evolves after the extreme impact.”

Planets form when dust particles around a young star stick together and grow larger over time. The leftover debris remains after a planetary system forms, often in distant, cold regions like the Kuiper Belt, located beyond Neptune in our own solar system. Astronomers expect to find warm dust around young solar systems. As they evolve, the dust particles continue to collide and eventually become small enough that they are either blown out of a system or pulled into the star. Warm dust around older stars, like our sun and the two in BD +20 307, should have long since disappeared. Studying the dusty debris around stars not only helps astronomers learn how exoplanet systems evolve but also builds a more complete picture of our own solar system’s history.

“This is a rare opportunity to study catastrophic collisions occurring late in a planetary system’s history,” said Alycia Weinberger, a staff scientist at the Carnegie Institution for Science’s Department of Terrestrial Magnetism in Washington, and lead investigator on the project. “The SOFIA observations show changes in the dusty disk on a timescale of only a few years.”

Infrared observations, such as those from SOFIA’s infrared camera called FORCAST, the Faint Object Infrared Camera for the SOFIA Telescope, are critical for uncovering clues hidden in cosmic dust. When observed with infrared light, this system is much brighter than expected from the stars alone. The extra energy comes from the glow of the dusty debris, which can’t be seen at other wavelengths.

While there are several mechanisms that could cause the dust to glow more brightly—it could be absorbing more heat from the stars or moving closer to the stars—these are unlikely to happen in just 10 years, which is lightning fast for cosmic changes. A planetary collision, however, would easily inject a large amount of dust very quickly. This provides more evidence that two exoplanets crashed into each other. The team is analyzing data from follow-up observations to see if there are further changes in the system.