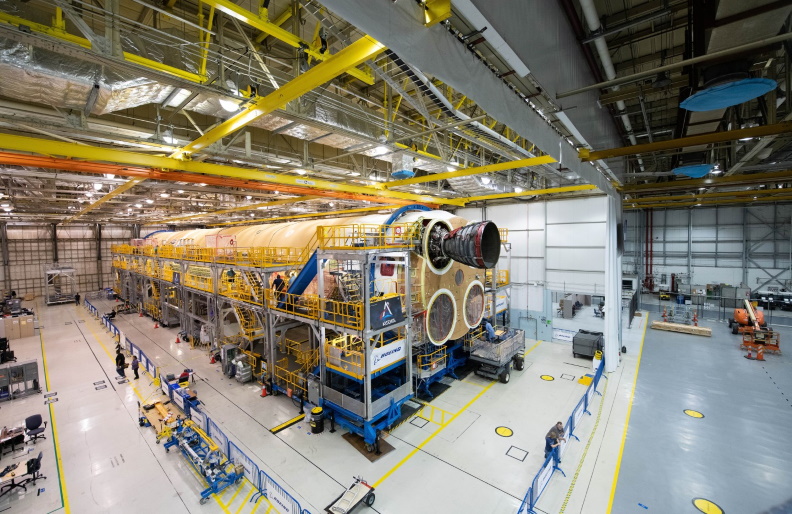 NASA has integrated the first RS-25 engine with the recently-completed core stage of its upcoming super heavy-lift Moon rocket – the Space Launch System (SLS). The engines are refurbished units that were built to power the now-defunct Space Shuttle Program, and that will now be used to return astronauts to the Moon.

The SLS is currently envisioned by NASA as the workhorse of its Artemis Program, which will see new hardware designed and flown with the goal of putting the bootprints of the first woman and the next man on the lunar surface.

The structure of the 212-ft (64.6-m) core stage of the first SLS rocket was completed on September 19. During the Artemis, I mission, the SLS core, with the help of two massive solid-fuel strap-on boosters, will catapult an Orion capsule and service module on a journey that will take it on a series of orbits of the Moon before returning to Earth.

Engineers have now mated the first of four heritage boosters to the Artemis I SLS core stage. NASA personnel are additionally working to integrate the electronic and propulsion systems of the massive structure with the powerful engine. This same process will be repeated for each of the four RS-25 engines, which were delivered to the agency’s Michoud Assembly Facility in New Orleans, in June.

During operation, the four RS-25s located at the base of the core will be fed liquid hydrogen and liquid oxygen at a rate of 1,500 gallons (5,678 l) per second. These engines, along with the strap-on boosters, will be capable of producing 8 million lb (3.6 million kg) of thrust. During the ascent, they will burn for a solid eight and a half minutes while being controlled by avionics systems located in the forward skirt and intertank of the leviathan core stage.

The four upgraded shuttle engines allocated to the Artemis I SLS – designated E2045, E2056, E2058 and E2060 – had previously contributed to 21 successful shuttle missions over a span of three decades.

NASA recently announced that it was looking to finalize a contract with Boeing, the lead contractor for the SLS core stage, which would support the construction of a further 10 rocket cores and multiple Upper Exploration Stages.