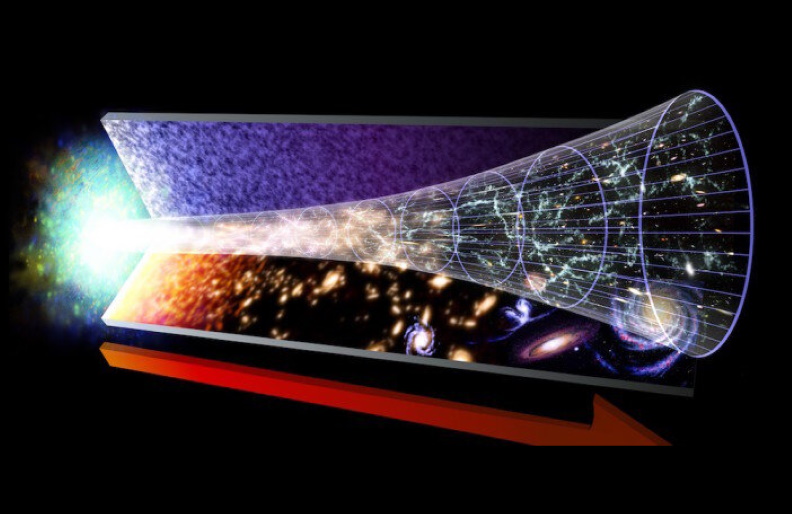 The universe bathes in a sea of light, from the blue-white flickering of young stars to the deep red glow of hydrogen clouds. Beyond the colors seen by human eyes, there are flashes of X-rays and gamma rays, powerful bursts of radio, and the faint, ever-present glow of the cosmic microwave background. The cosmos is filled with colors seen and unseen, ancient and new. But of all these, there was one color that appeared before all the others, the first color of the universe.

The universe began 13.8 billion years ago with the Big Bang. In its earliest moment, it was more dense and hot than it would ever be again. The Big Bang is often visualized as a brilliant flash of light appearing out of a sea of darkness, but that isn’t an accurate picture. The Big Bang didn’t explode into empty space. The Big Bang was an expanding space filled with energy.

At first, temperatures were so high that light didn’t exist. The cosmos had to cool for a fraction of a second before photons could appear. After about 10 seconds, the universe entered the photon epoch. Protons and neutrons had cooled into the nuclei of hydrogen and helium, and space was filled with a plasma of nuclei, electrons, and photons. At that time, the temperature of the universe was about 1 billion degrees, Kelvin.

But even though there was light, there was not yet color. Color is something we can see, or at least some kind of eyes could see. During the photon epoch, temperatures were so high that light couldn’t penetrate the dense plasma. The color wouldn’t appear until the nuclei and electrons cooled enough to bind into atoms. It took 380,000 years for the universe to cool that much.

By then, the observable universe was a transparent cosmic cloud of hydrogen and helium 84 million light-years across. All the photons formed in the Big Bang were finally free to stream through space and time.

This is what we now see as the cosmic microwave background—the glow of light from a time when the universe could finally be seen. Over billions of years, the glow has cooled to the point that it now has a temperature less than 3 degrees above absolute zero. When it first appeared, the universe was much warmer, about 3,000 K. The early universe was filled with a bright warm glow.

We have a good idea of what that first color was. The early universe had an almost even temperature throughout, and its light had a distribution of wavelengths known as a blackbody. Many objects get their color from the type of material they are made of, but the color of a blackbody depends only on its temperature. A blackbody at about 3,000 K would have a bright orange-white glow, similar to the warm light of an old 60-watt light bulb.

Humans don’t see color very accurately. The color we perceive depends not only on the actual color of light but its brightness and whether our eyes are dark-adapted. If we could go back to the period of that first light, we would probably perceive an orange glow similar to firelight.

Over the next several hundred million years, the faint orange glow would fade and redden as the universe continued to expand and cool. Eventually, the universe would fade to black. After about 400 million years, the first brilliant blue-white stars began to form, and new light appeared. As stars and galaxies appeared and evolved, the cosmos began to take on a new color.

In 2002, Karl Glazebrook and Ivan Baldry computed the average color from all the light we see from stars and galaxies today to determine the current color of the universe. It turned out to be a pale tan similar to the color of coffee with cream. They named the color “cosmic latte.”

Even this color will only last for a time. As large blue stars age and die, only the deep red glow of dwarf stars will remain. Finally, after trillions of years, even their light will fade, and the universe will become a sea of black. All colors fade in time, and time will carry us all into the dark.

But for now, the colors of the universe still paint us. And if you ever sit by a fire with a creamed coffee as you look up into the dark of night, know that you are bathed by cosmic colors. Past, present, and future.