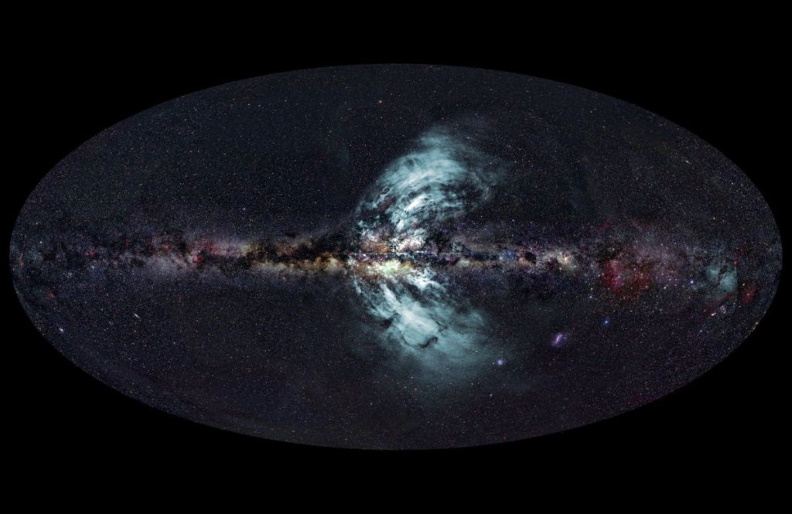 There might be cracks in space-time, but humanity’s telescopes can’t see them.

The cracks, if they exist, are old — remnants of a time shortly after the Big Bang when the universe had just shifted from a hotter, more alien state to the cooler, more familiar one we see today. That great cool-down, what physicists call a “phase transition,” started earlier in some places than others, the theory goes. Bubbles of cooler universe formed and spread, blooming across space until they met other bubbles. Eventually, all of the space transitioned, and the old universe disappeared.

But that old, high-energy state might have lived on at the borders between the bubbles, cracks in the fabric of space-time where those cooling regions met and didn’t perfectly fit together. Some physicists thought we might still see evidence of those cracks or defects — known as “cosmic strings” — in the cosmic microwave background (CMB), the heat leftover from the universe’s violent emergence. But according to a new paper, that evidence would simply be too faint for any telescope to ever pick out against the noise.

Cosmic strings are difficult objects to imagine, said Oscar Hernández, a physicist at McGill University in Montreal and co-author of the paper. But they have analogs in our world.

“Have you walked on a frozen lake? Have you noticed cracks laced through the frozen lake ice? It’s still quite solid. There’s nothing to be afraid of, but there are cracks,” Hernández told Live Science

Those cracks form through a similar phase-transition process as cosmic strings.

“Ice is water that has gone through a phase transition,” he said. “Molecules of water were free to move as a fluid, and then all of a sudden, somewhere, they start to form into a crystal. … It starts to tile itself in tiles, which are [often] hexagons. Now, imagine having tiles that are perfect hexagons and tiling [the lake] with that. If somebody at the other end of the lake starts to tile [it] again,” there’s essentially zero chance that your tiles will line up.

Imperfect meeting places on a frozen lake surface form long cracks. In the fabric where space and time intersect, they form cosmic strings — if the underlying physics is correct.

In space, researchers believe, there are fields that determine the behavior of fundamental forces and particles. The first phase transitions of the universe brought these fields into being.

Today, those meeting points would appear as infinitesimally thin lines of energy through space.

Finding those cosmic strings would be a big deal because they would be another piece of evidence that physics is bigger and more complicated than the current model allows, Hernández said.

Right now, the most advanced theory of particle physics that researchers feel has been conclusively proven is known as the Standard Model. It includes the quarks and electrons that makeup atoms, as well as more exotic particles like the Higgs boson and neutrinos.

However, most physicists believe the Standard Model is incomplete. As Live Science has reported previously, there are all sorts of ideas on how to expand on it, from supersymmetric particles (i.e., the “stau slepton”) to superstring theory — the idea that all particles and forces can be explained as vibrations of tiny, multidimensional “strings.” (Note: The “strings” of superstring theory are not the same sort of thing as cosmic “strings.” There are only so many metaphors available and sometimes physicists in different fields reuse one.)

“Many extensions of the Standard Model that people really like — like a lot of superstring theories and others — naturally lead to cosmic strings after [post-Big Bang] inflation takes place,” Hernández said. “So what we have is an object that is predicted by very many models, so if they don’t exist then all these models are ruled out. And if they do exist, oh my god, people are happy.”

Since 2017, there’s been a flurry of interest in trying to spot strings in the CMB, Hernández and his co-author wrote in their paper, published Nov. 18 to the arXiv database and not yet peer-reviewed.

Hernández, together with Razvan Ciuca of Marianopolis College in Westmount, Quebec, had argued in the past that a convolutional neural network — a powerful type of pattern-finding software — would be the best tool for spotting evidence of the strings in CMB.

Assuming a perfect, noise-free map of the CMB, they wrote in a separate 2017 paper, a computer running that sort of neural network should be able to find cosmic strings even if their energy levels (or “tension”) are remarkably low.

But revisiting the subject in this new 2019 paper, they showed that in reality, it’s almost certainly impossible to provide clean enough CMB data for the neural network to detect these potential strings. Other, brighter microwave sources obscure the CMB and are difficult to fully disentangle. Even the best microwave instruments are imperfect, with limited resolution and random fluctuations in their recording accuracy from one pixel to the next. All those factors and more, they found, add up to a level of information loss that no current or planned method of recording and analyzing the CMB will ever be able to overcome, they wrote. This method of hunting cosmic strings is a dead end.

That doesn’t mean all is lost, though, they wrote.

A new method for hunting cosmic strings is based on measurements of the expansion of the universe in all directions across ancient parts of the universe. This method — called 21-centimeter intensity mapping — doesn’t rely on studying the movements of individual galaxies or on precise images of the CMB, Hernández said. Instead, it’s based on measurements of the speed at which hydrogen atoms are moving away from Earth, on average, in all parts of deep space.

The best observatories for 21-cm mapping (so named because hydrogen emits electromagnetic energy with a telltale 21-cm wavelength) aren’t yet online. But when they arrive, the authors wrote, there’s hope for clearer evidence of cosmic strings in their data. And then, Hernández said, the hunt can begin anew.