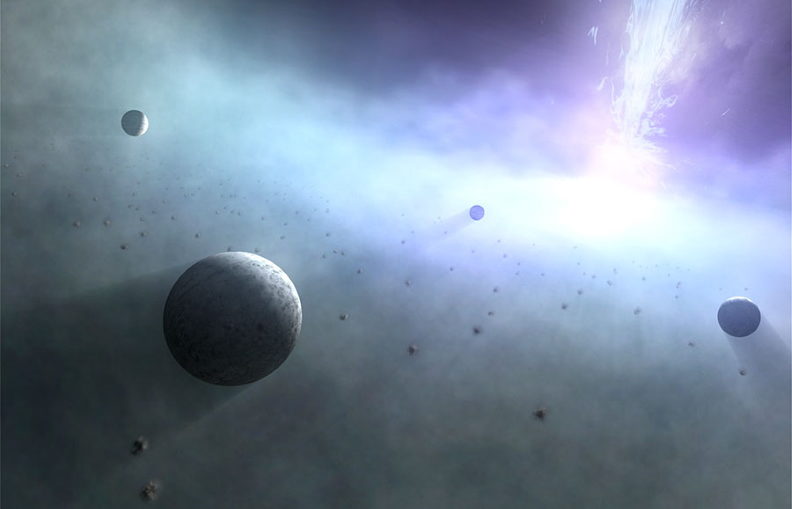 Perhaps the greatest discovery to come from the “Golden Age of General Relativity” (ca. 1960 to 1975) was the realization that a supermassive black hole (SMBH) exists at the center of our galaxy. In time, scientists came to realize that similarly, massive black holes were responsible for the extreme amounts of energy emanating from the active galactic nuclei (AGNs) of distant quasars.

Given their sheer size, mass, and energetic nature, scientists have known for some time that some pretty awesome things take place beyond the event horizon of an SMBH. But according to a recent study by a team of Japanese researchers, it is possible that SMBHs can actually form a system of planets! In fact, the research team concluded that SMBHs can form planetary systems that would put our Solar System to shame!

The study that describes their findings, titled “Planet Formation around Super Massive Black Holes in the ActiveGalactic Nuclei” was recently published in the Astrophysical Journal. The study was conducted by Professors Keiichi Wada and Yusuke Tsukamoto of Kagoshima University, with the assistance of Prof. Eiichiro Kokub from the National Astronomical Observatory of Japan (NAOJ).

Combining expertise from two different fields – active galactic nuclei and planet formation – the team sought to determine if the gravitational attraction of SMBHs could form planets the same way stars do. In accordance with the most widely-accepted model (the Nebular Hypothesis), planets form around young stars from a flattened (protoplanetary) disk of material, which gradually accretes over time.

However, young stars are not the only objects in our Universe that have disks of material surrounding them. In fact, astronomers have also observed heavy disks of loose material in the nuclei of galaxies, which were dominated by the gravity of a central black hole. From this, the team calculated the likelihood of planets forming from these disks.

As Prof. Keiichi explained, their results showed that “[w]ith the right conditions, planets could be formed even in harsh environments, such as around a black hole.” Ordinarily, the process of planet formation begins in the low-temperature regions of a protoplanetary disk, where dust grains with ice mantles stick together to form larger aggregates.

The research team applied this same theory of planet formation to the disks around black holes and found that planets could after several hundred million years. According to their study, the high-gravity environment that surrounds a black hole will cause a protoplanetary disk to become incredibly dense.

This will have the effect of blocking the intense radiation coming from the central region of a black hole, causing low-temperature regions to form. More to the point, their calculations showed that a massive system of planets could form. As Professor Eiichiro, a professor at the NAOJ who studies planet formation, explained:

“Our calculations show that tens of thousands of planets with 10 times the mass of the Earth could be formed around 10 light-years from a black hole. Around black holes there might exist planetary systems of astonishing scale.”

Astronomers have observed that some SMBHs are surrounded by disks that contain upwards of one billion times as much mass as disks observed around stars. That works out to as much as a hundred thousand times the mass of our Sun. This raises an interesting point… if planets can form around an SMBH, could stars form as well? Perhaps, stars with their own systems of planets?

What this would look like is a question that was addressed by physicist Dr. Sean Raymond. Last year, he conducted a series of simulations that incorporated the physics of black holes into our Solar System and the physics of an SMBH to create a hypothetical system where 9 stars and as many as 550 habitable planets orbited a central black hole – called the “The Black Hole Ultimate Solar System” (video below).

Currently, there are no techniques that could be used to detect planets around a black hole. The most widely-used methods – Transit Photometry and the Doppler Spectroscopy – would be effectively useless since black holes emit no light and their gravitational force is likely to be far too great to ever be offset by a system of planets.

However, the team expects that this study and similar research could open up a new field of astronomy. And with the recent success of the Event Horizon Telescope (which captured the first image of an event horizon in April of this year), it is possible that we are on the verge of an era where astronomers can observe and study black holes directly.