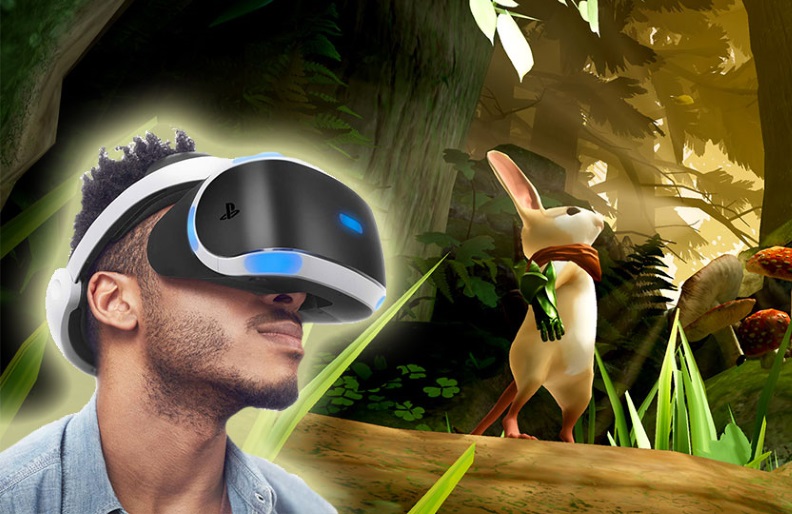 The quality of PSVR games just gets better and better

There’s a confidence to the next wave of games being developed for the PlayStation VR headset that transcends the limitations of the hardware they’re running on.

Sony’s PlayStation 4 VR gamble was one that put accessibility and price (pairing a relatively affordable, low-res virtual reality headset with a relatively underpowered console) over a ‘money-is-no-object’ mentality that its high-powered, high-priced PC rivals opted for. And, on the strength of the slate of games set for release in the coming weeks and months, it’s a gamble that’s paid off.

Following Paris Games Week and its vote of confidence in PlayStation VR going forward, I attended a PlayStation showcase session where I was able to try out the likes of Moss, Bravo Team and Blood And Truth. Each very different virtual reality titles, all showed a progression in the quality of the experiences being squeezed out of the console hardware.

From mighty mice to military musclemen

Take first Moss, a family-friendly platform puzzler that moves away from the first-person experiences that dominate the VR landscape. You play as a sort of omnipotent guide to an intrepid, sword-swinging mouse adventurer, controlling the mouse’s movements directly while also separately interacting with environmental elements to clear a path or swing the tide of battle in your whiskered friends’ favor.

Moss isn’t the first VR game to opt for a third-person perspective. Oculus Rift standouts Chronos and Edge of Nowhere have similarly proven that you don’t need to be digitally-embodied inside a character to achieve a great VR experience. But few have managed it with such charm.

Moss (as hammered home by its fairy tale book opening) is like peering into a magical portal, full of stony ruins and nasty clockwork beetles. There’s a sense that it could exist as a game in its own right, elevated by VR rather than using it as a crutch. You’re given a sense of physicality while interacting with Moss’s environments with the Move controllers, while clever use of perspective makes its diminutive world seem enormous.

Bravo Team is at the complete opposite end of the spectrum – a first-person co-op cover shooter that owes as much to Time Crisis as to Call of Duty or Gears of War. As members of an outnumbered military strike force, you’ll move from cover zone to cover zone, taking pot-shots at enemy forces intent on stopping you dead.

Again, we’ve seen titles like this before – it’s very much the evolution of the arcade lightgun shooter. But by taking in strategic firing elements taken from online shooters, and throwing in co-op action into the mix, the presence VR affords turns what would otherwise seem a generic shooter into your very own Black Hawk Down simulator.

Those that picked up Farpoint will be pleased to hear that the Aim controller is being put to good use once again, giving your in-game rifle a weight and its physical size mirrored by the real-world peripheral. While some may bemoan the lack of free movement control, it actually serves the player in two ways – preventing queasiness (the camera pulls back to a third person view when you choose to move to a selection of pre-determined cover positions) and affords the devs the opportunity to put you in the middle of cinematic action sequences as they’ve been directed.

The jewel in PS VR’s upcoming calendar by a country mile though is Blood And Truth. Built by London Studio, the team behind the PS VR launch-title-cum-sizzle-reel VR Worlds, it’s a continuation of that title’s slick Cockney criminal underworld.

James Bond by way of Guy Ritchie, Blood and Truth is a first-person shooter that sees you play as an ex-special forces operative pulled into a dark and seedy criminal realm in order to protect your family. It’s knowingly shot through with cliche, and plays up to it in order to place you in the center of action set pieces worthy of the silver screen.

In the demo, you’ll infiltrate a heavily-guarded casino, scoping the joint through a CCTV camera system, placing explosive charges among the roulette tables and chasing down an informant through the chaos of a gunfight. All are scenes torn straight from the Hollywood set-piece playbook – but where they’d feel tired in a cinema, they’re invigorating with you at the heart of the action.

Again, like Bravo Team, movement is limited to pre-determined paths and cover points. But London Studio uses it to its advantage, with the routes presented to you as lushly detailed as anything yet seen on PS VR (rivalling even the best seen on Oculus Rift and HTC Vive) delivering a comfortable movement pace that gives the player time to engage, and avoid stomach churn.

London Studio is as close to a veteran VR dev team as we have at the moment, and it shows in the level of polish with which its ideas are executed. The team is comfortable to let a player play in its gangster’s paradise, only offering prompts when a gamer lingers (obviously frustrated) too long before an obstacle. So, when faced with a locked ladder, you shoot the lock off and intuitively climb it with gripping motions on the PS Move controllers, grab a CCTV camera controller’s joystick to turn its gaze, and fire at the feet of a stubborn informant refusing to spill the beans. It’s the beauty of VR, and of a well-realised fictional world – if you know the role you’re playing (here a superspy Bourne-type), you’ll know naturally how to interact with the scenario in the most satisfyingly-tropey way.

These standout incoming VR experiences, each built from the ground-up, did not cast Bethesda’s Doom VFR in a great light. While it visually held its own (2016’s Doom which this draws from looks fantastic already, and it’s scaled well here), its VR execution felt sloppy. Though it’s an all-new campaign based on 2016’s first person shooter, its core remains built on the foundations of that earlier title. As such, it feels ill suited to its new VR home – while I’m happy to put some problematic Move tracking down to a demo hitch, the frenetic pace, awkward teleportation methods and punishing bullet-hell gunfire made it feel overwhelming where its original FPS roots would feel empowering. An extended play session may hopefully help you acclimatise.

That blip aside, the line-up is looking solid. There’s something for everyone, with GT Sport now on shelves for racers and a (hopefully more impressive) port of Skyrim looming for RPG fans. There’s newly-revised hardware on the horizon too.

There’s a sense, among the developers at the showcase and from PlayStation’s actions in general, that the time to really push PlayStation VR is now. That’s right down to the fact Sony’s started seeding VR games in among its PlayStation Plus freebies. This month you can get PS VR exclusive Until Dawn: Rush of Blood with your subscription – a service with a userbase that massively outweighs that of the million-or-so install base of the PS VR. A quality title, if that’s not dangling a carrot in front of someone sitting on the PS VR fence, I don’t know what is.

With developers increasingly comfortable with the platform, and Sony seemingly satisfied with the trajectory of the accessory, PS VR appears to be in rude health as it enters its second year.

Upon the arrival of this current wave of VR hardware we may have all expected ports of established AAA franchises to be what we’d be clamouring for – and those are coming through. But it’s increasingly the VR-first, specifically crafted experiences that are shining brightest, and Sony’s headset has a whole bunch of them waiting in the wings.

This article was originally published by Tech Radar.