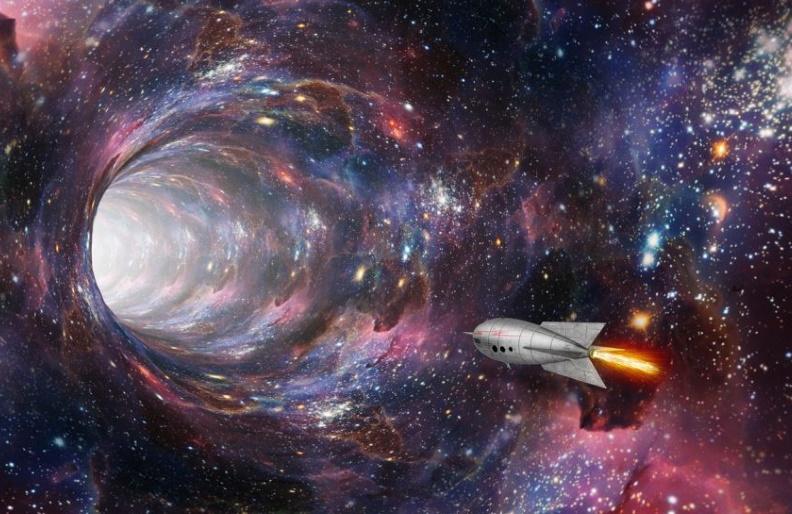 Everybody wants a wormhole. I mean, who wants to bother traveling the long-and-slow routes throughout the universe, taking tens of thousands of years just to reach yet another boring star? Not when you can pop into the nearest wormhole opening, take a short stroll, and end up in some exotic far-flung corner of the universe.

There’s a small technical difficulty, though: Wormholes, which are bends in space-time so extreme that a shortcut tunnel forms, are catastrophically unstable. As in, as soon as you send a single photon down the hole, it collapses faster than the speed of light.

But a recent paper, published to the preprint journal arXiv on July 29, has found a way to build an almost-steady wormhole, one that does collapse but slowly enough to send messages — and potentially even things — down it before it tears itself apart. All you need are a couple of black holes and a few infinitely long cosmic strings.

In principle, building a wormhole is pretty straightforward. According to Einstein’s Theory of General Relativity, mass and energy warp the fabric of space-time. And a certain special configuration of matter and energy allows the formation of a tunnel, a shortcut between two otherwise distant portions of the universe.

Unfortunately, even on paper, those wormholes are fantastically unstable. Even a single photon passing through the wormhole triggers a catastrophic cascade that rips the wormhole apart. However, a healthy dose of negative mass — yes, that’s matter but with an opposite weight — can counteract the destabilizing effects of regular matter trying to pass through the wormhole, making it traversable.

OK, matter with negative mass doesn’t exist, so we need a new plan.

Let’s start with the wormhole itself. We need an entrance and an exit. It’s theoretically possible to connect a black hole (a region of space where nothing can escape) to a white hole (a theoretical region of space where nothing can enter). When these two odd creatures join together, they form a brand-new thing: a wormhole. So you can jump into either end of this tunnel and instead of getting crushed into oblivion you just harmlessly waltz out the other side.

Oh, but white holes don’t exist, either. Man, this is getting tricky.

Since white holes don’t exist, we need a new plan. Thankfully, some clever math reveals a possible answer: a charged black hole. Black holes can carry an electric charge (it’s not common because of the way they’re formed naturally, but we’ll take what we can get). The inside of a charged black hole is a strange place, with the normal point-like singularity of a black hole stretched and distorted, allowing it to form a bridge to another oppositely charged black hole.

Voila: a wormhole, using only things that might actually exist.

But this wormhole-via-charged-black-holes has two issues. One, it’s still unstable, and if something or someone actually tries to use it, it falls apart. The other is that the two oppositely charged black holes will be attracted to each other — both through gravitational and electric forces — and if they fall together you just get a single, big, neutrally charged and altogether useless black hole.

Put a cosmic bow on it

So to make this all work we need to make sure the two charged black holes stay safely far away from each other, and make sure the tunnel of the wormhole can hold itself open. A potential solution: cosmic strings.

Cosmic strings are theoretical defects, similar to the cracks that form when ice freezes, in the fabric of space-time. These cosmic leftovers formed in the early, heady days of the first fractions of a second after the Big Bang. They are truly exotic objects, no wider than a proton but with a single inch of their length outweighing Mount Everest. You never want to encounter one yourself, since they would slice you clean in half like a cosmic lightsaber, but you don’t have to worry much since we’re not even sure they exist, and we’ve never seen one out there in the universe.

They have another very useful property when it comes to wormholes: enormous tension. In other words, they really don’t like being pushed around. If you thread the wormhole with a cosmic string, and allow the string to pass along the outside edges of the black holes and stretch out of either end all the way to infinity, then the tension in the string prevents the charged black holes from being attracted to each other, holding the two ends of the wormhole far away from each other. Essentially, the distant ends of the cosmic string act like two opposing tug-of-war teams, holding back the black holes.

One cosmic string solves one of the problems (holding the ends open), but it doesn’t prevent the wormhole itself from collapsing if you were to actually use it. So, let’s toss in another cosmic string, also threading the wormhole, but also looping it through normal space between the two black holes.

When cosmic strings are closed in a loop, they wiggle — a lot. These vibrations churn the very fabric of space-time around them, and when tuned just right the vibrations can cause the energy of space in their vicinity to go negative, effectively acting like negative mass within the wormhole, potentially stabilizing it.

It seems a little complex, but in the recent paper, a team of theoretical physicists gave step-by-step instructions for constructing just such a wormhole. It’s not a perfect solution: Eventually the inherent vibrations in the cosmic strings — the same ones that might keep the wormhole open — pull energy, and therefore mass, away from the string, making it smaller and smaller. Essentially, over time the cosmic strings wiggle themselves into oblivion, with complete collapse of the wormhole not far behind. But the kludged-together wormhole may stay stable long enough to allow messages or even objects to travel down the tunnel and actually not die, which is nice.

But first we need to find some cosmic strings.

Paul M. Sutter is an astrophysicist at The Ohio State University, host of Ask a Spacemanand Space Radio, and author of Your Place in the Universe.