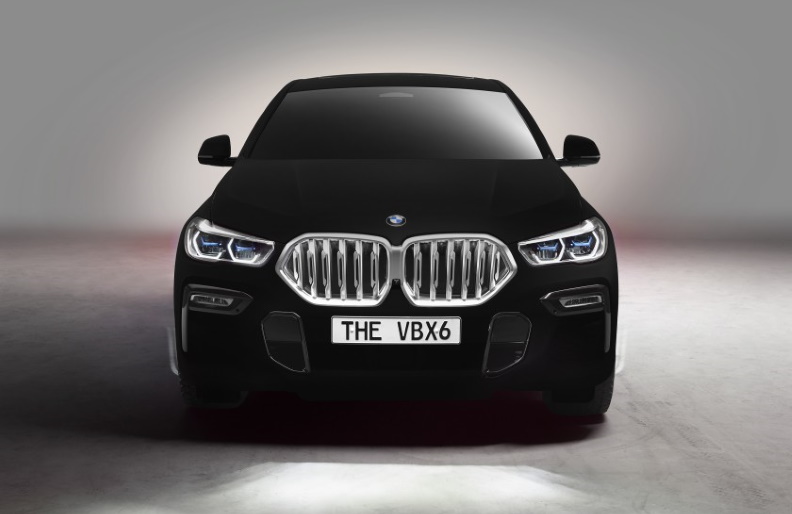 Vantablack, first announced in 2014, is a rare real-life special effect, a coating so black that it sucks in almost every photon that hits it. It makes any three-dimensional object basically look like a hole has been cut in the universe. Painted in this array of infintessimally small carbon nanotubes, everything loses its appearance of shape, because there’s no light or shade to define it. It’s incredibly unnerving to look at, and since the moment it was first announced, people have been saying “for the love of all that’s holy, put this stuff on a car, it would be the sickest thing in history.”

Until this day, there has been no black black enough for some car owners, whose murdered-out rides are either glossy and highly reflective, or matt and kind of grey to look at. But BMW’s new X6 show car is unlikely to be accused of looking too cheerful as it stalks down the street. It’s the first vehicle in history to get a Vantablack paint job.

That’s not for want of asking – Surrey Nanosystems, the company behind this bizarre coating, says it’s been fighting off enquiries from car manufacturers since day dot, but according to Surrey CTO Ben Jensen, “it took the BMW X6 and its unique, expressive design for us to entertain the idea.”

You’ll forgive us for raising an eyebrow at this notion. The half-coupe, half-SUV BMW X6 is decent enough to look at, but we doubt it’s going to fill out anyone’s top 10 car designs list. It’s also by no means hideous enough to make anyone’s top 10 “cars that are so ugly you wish they were turned into gaps in reality” list.

Whatever the case, Surrey Nanosystems didn’t use its blackest formula for the X6, going for a new sprayable VBx2 formula that actually reflects one percent of the light that hits it, instead of sucking up 99.965 percent of all light like the original Vantablack recipe.

“It wouldn’t have worked if we’d put on the original material,” said Jensen. “The viewer would have lost all sense of three-dimensionality. VBx2 with its one-per-cent reflectance provides just enough of a hint of shape. Add to that the contrast between the matt black surface and details such as the Iconic Glow kidney grille, the headlights and the windows – everything is just set off beautifully.”

BMW’s creative director of automotive design, Hussein Al Attar, says he can “absolutely” imagine a Vantablack option making its way into the BMW options catalog – but Surrey Nanosystems is far less optimistic. While Vantablack is being used more and more to reduce reflectivity around sensitive camera and sensor systems that power semi-autonomous driving, Jensen doesn’t feel like it’s ready for the road just yet: “developing a Vantablack VBx2 car paint durable enough for daily use is a huge technological challenge.”

That’s a shame, because it’s one thing to see this stuff in photos, where it simply looks digitally altered, and we imagine it’s another thing altogether to see in the flesh, rolling down the road like a 550-horsepower wormhole to another dimension, its shape only defined by its reflective windows, headlights, taillights, badges, exhaust tips, license plate … and of course that monstrous kidney grille on the front, which looks all the more ludicrous when it’s lit up and hanging in the blackness of starless space.

We hope BMW takes this thing out on the street after showing it at the Frankfurt Motor Show next month. It looks absolutely remarkable in these spray booth photos, but we want to see it tear an X6-shaped hole in a bright summer’s day. The sheer blackness of this thing will probably make it even more visible on the road than a brightly-painted car. It’ll look like a ghostly apparition at night, and we’d be very interested in learning how Vantablack reacts with things like police radars. On a similar note, we wonder how it would affect LiDAR-based adaptive cruise and camera-based autopilot systems on other cars around it in traffic.

And whether or not it makes any sense to the Vantaback team, we’d love to see a car done up in the full-fat original recipe. The idea of dialing down the power of Vantablack just doesn’t sit well with us, this is an extreme technology that should be presented in its most extreme form. And we’re sure it’ll happen one day.

Check out a video of the X6 and its Vantablack paint job below.