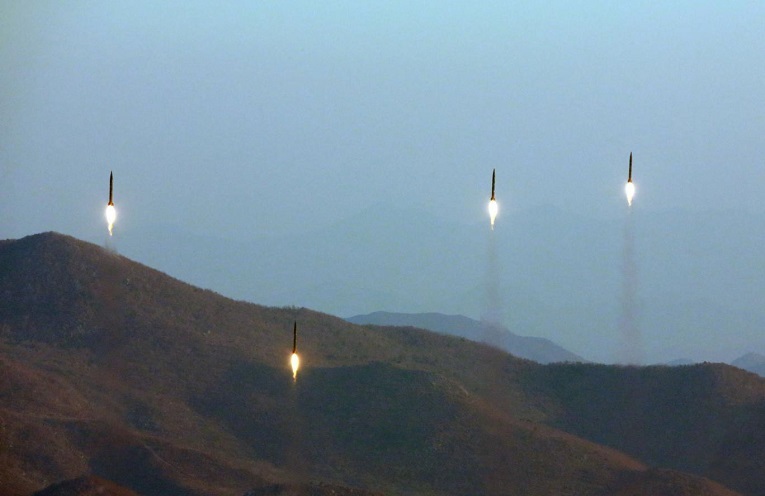 North Korea has test-fired another ballistic missile less than 24 hours after Donald Trump warned of the potential for a “major, major conflict” with the isolated state.

In a clear message of defiance aimed at Washington and its allies, the regime, which has nuclear ambitions, fired a missile early on Saturday morning from a region north of the capital, Pyongyang.

The US President, tweeting about the incident, described the launch as “bad” and said it had “disrespected” Chinese leader Xi Jinping – the North’s closest ally.

“North Korea disrespected the wishes of China & its highly respected President when it launched, though unsuccessfully, a missile today. Bad!” he wrote.

US officials said a medium-range ballistic missile fired by the regime disintegrated mid-flight minutes after launch.

They added that the missile was likely to be a medium-range KN-17 ballistic missile, which broke up and fell into the Sea of Japan.

It is believed to have been fired at around 1630 [2030 GMT] and did not leave North Korean territory.

The White House is understood to be considering increased economic sanctions on North Korea in the wake of the latest test. The US may also increase its naval deployments to the region.

South Korea’s Joint Chiefs of Staff also confirmed the test had failed, while Japan condemned the action as absolutely unacceptable and said it was a violation of UN resolutions.

North Korea has tested a variety of ballistic missiles, with shorter-range missile firings routine, but there is growing concern about longer range ballistic tests.

Saturday’s launch comes at a point of particularly high tensions, with Mr Trump taking a hardline with Pyongyang.

On Thursday, the President said he was committed to resolving the diplomatic crisis peacefully.

But he added: “There is a chance that we could end up having a major, major conflict with North Korea. Absolutely.”

The test also came as Secretary of State Rex Tillerson warned the United Nations that failure to curb North Korea’s nuclear and ballistic missile programmes could lead to “catastrophic consequences”.