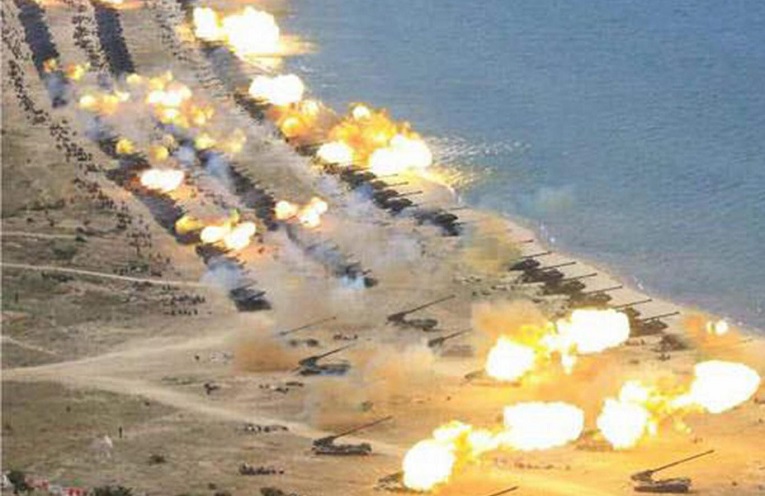 North Korea’s youth league says it is prepared to “wipe out” the US with five million nuclear bombs if Pyongyang is threatened.

A spokesman for the Central Committee of the Kimilsungist-Kimjongilist Youth League claimed “the Earth will break” if North Korea launches an attack and promised to destroy Seoul or Washington if either shows “a slight provocation”.

The warning came following mounting tension in the peninsula after Pyongyang carried out another failed nuclear test earlier this month.

The spokesman told the state-run Korean Central News Agency the youths were “keeping themselves fully combat-ready to mercilessly wipe out with five million nuclear bombs the group of devils who are trying to bring a nuclear disaster to the inviolable country”.

Meanwhile, Seoul and Washington announced they had agreed on “swift punitive measures” against Pyongyang and would continue the deployment of the THAAD anti-missile system despite protests from Beijing.

The two countries staged a joint military live-fire drill at the Seungjin fire training field in Pocheon, South Korea near the border with the North.

There are now fears North Korea could stage another nuclear test or missile launch to mark the 85th anniversary of the founding of their army by Kim Jong Un’s grandfather, Kim Il Sung.

The military carried out a drill in the eastern port city of Wonsan to mark the occasion on Tuesday, which included mock submarine torpedo-attacks and the firing of more than 300 large-calibre artillery pieces.

It came as US Vice-President Mike Pence gave a speech in which he said the “era of strategic patience” was over and Donald Trump vowed to solve the North Korea problem with or without China’s help.

Though it has warned “all options are on the table”, Mr Trump’s administration said on Wednesday it aimed to push North Korea into dismantling its weapons programmes through tougher sanctions and diplomatic pressure, and it remained open to talks.

The US signal of willingness to exhaust non-military avenues came as the USS Carl Vinson aircraft carrier group approached Korean waters, where it will join the USS Michigan nuclear submarine.

North Korea’s official Rodong Sinmun newspaper said it was “entirely because of the US” that global denuclearisation had not materialised.

“So US officials should know this clearly and feel responsible, not play with their beaks thoughtlessly,” it said.