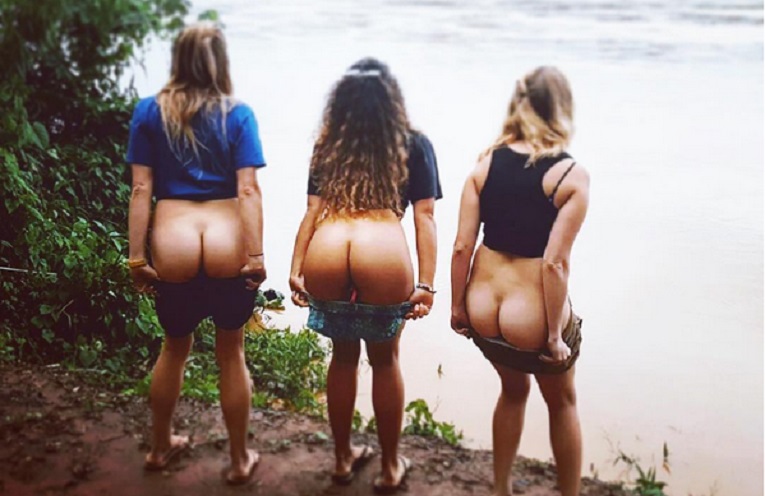 The new travel trend sweeping social media is to take a photo of your naked bum in a famous place.
It was on an ill-fated trip to see the Northern Lights in February that I was first exposed to the concept of “cheeky exploits”.
As a vague vapour trail-like mark moved across the sky (unless the Northern Lights are strong, the naked eye will most likely see them in mono and the green hue will only be picked up by cameras, which don’t see with rods and cones), one of our group put down his equipment. Hurray, I thought – someone else is going to look at the Northern Lights with their eyes, instead of a wide lense – and then he started taking off his clothes.

In the snow, he stripped down completely, strode a couple of feet away down the garden with his back to us, spread his legs, thrust his arms skyward and screamed “Wooohooo!” as our host captured the event for posterity with his long exposure shot.
https://www.instagram.com/p/BS8FI8_FObN/

He must have caught my look of revulsion, because he apologised for offending the “ladies” and exchanged a look – if you’re female, you already know that look – with our host (who later informed me that I wasn’t “his kind of person”).

“I’m not offended,” I said at the time. Though I should have added, “I just think you’re repellent.”

Because repellent’s the word for the new ‘trend’ apparently sweeping the travelsphere. Buoyed by an Instagram account which has 86,000 followers, daring/sassy/pathetic (delete as appropriate) travellers are going to knock-out destinations, pulling down their pants and posing for a photo. Grand Canyon? Let me add another to the shot. Lol! To infinity.

The Cheeky Exploits account was first shared on a travel group I belong to, with a request for members to share their own bare-bottomed photos. Dozens did. When one person expressed disapproval, they were shouted down as a prude. And no one wants to be a prude.

But it’s not prudish to think pulling down your pants and flashing your bum isn’t appropriate tourist behaviour.

“I’m proud of my butt,” they say – because of course, this appears to be a trend started in America and perpetuated by American tourists.

It’s about the people who live there. It’s about perpetuating the ugly American (and Australian and Brit) stereotype. Because if there’s one thing that links the bum cheeks on the Cheeky Exploits account, it’s that the vast majority are toned a pasty white.

I get it. You’re young, you’re proud of your pert bum cheeks, you think it’s great bantz to flash the world – I don’t care! I’m fearless! I’m a Cool Girl/Bro! Look at me roar!

But the photos don’t say fearless to me. Derivative, maybe. Attention-seeking, definitely. Desperate, probably. Offensive: indisputably. And not because of your naked bottom – as you keep saying, every time we look appalled, we’ve all got them; but because of the disrespect to the locals that you convey.

First world travellers are great at conveying that already, of course. Whether it’s French tourists shouting their way round churches in Venice, Americans breaking into the Colosseum or Jennifer Lawrence joking (because it’s always just a joke, get over it grandma) about scratching her bum on a sacred rock in Hawaii, no other group of travellers acts as if they hold the sites they’re travelling to see in such contempt.

For the selfie and belfie generation, it’s all about them. They pick their holiday destinations according their Instagram potential. They turn their backs to the sights so they can squeeze their face into the shot. Instead of watching the Northern Lights with their eyes, when they’ve crossed time zones and spent thousands to experience them, they watch them through the viewfinder, or strip off and scream to make sure they get that kerrazy profile pic that’ll break their “likes” record.

You’d think we’d have learned our lessons after a group of tourists (including a 23-year-old British woman) were tried for “obscene acts” by stripping on a sacred mountain in Malaysia. But we didn’t. Instead, the cheeky exploits crew rolled their eyes at the idea that to the locals, Mount Kinabalu was sacred and the subsequent earthquake was put down to the tourists offending the spirits.

It’s not even about religious offence, though. Two of the photos on the Cheeky Exploits feed appear to have been taken near where I live. It’s not a sacred site – it’s just a town. But I’m offended nevertheless. How dare someone come to my home and think it’s appropriate to flash their arse on the main street? If it was an old man in a mac, he’d be arrested. But because they’re young, cellulite-free and a dab hand with Instagram filters, it’s ok.

But it’s not ok. It’s not just desecration; it’s rude. I long for the innocent days of inappropriate selfies.

We’ve all got one, you say. Indeed we have. So do us all a favour and put yours away.