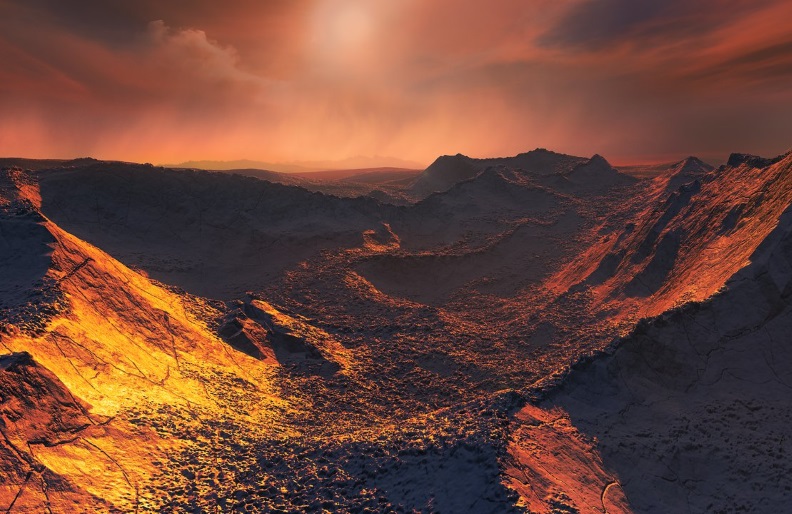 In 2018, scientists announced the discovery of a extrasolar planet orbiting Barnard’s star, an M-type (red dwarf) that is just 6 light years away. Using the Radial Velocity method, the research team responsible for the discovery determined that this exoplanet (Barnard’s Star b) was at least 3.2 times as massive as Earth and experienced average surface temperatures of about -170 °C (-274 °F) – making it both a “Super-Earth” and “ice planet”.

Based on these findings, it was a foregone conclusion that Barnard b would be hostile to life as we know it. But according to new study by a team of researchers from Villanova University and the Institute of Space Studies of Catalonia (IEEC), it is possible – assuming the planet has a hot iron/nickel core and experiences enhanced geothermal activity – that this giant iceball of a planet could actually support life.

The findings were shared at the 233rd meeting of the American Astronomy Society (AAS), which took place from January 6th to 10th in Seattle, Washington. The presentation, titled “X-Ray, UV, Optical Irradiances and Age of Barnard’s Star’s New Super Earth Planet – ‘Can Life Find a Way’ on such a Cold Planet“, was delivered during a press conference on January 10th and concerned findings that appeared in a recent study.

These findings were based on an analysis of 15 years worth of high-precision photometry of Barnard’s Star, as well as newly-acquired data.
This data, along with that of other observers, was included in a recent comprehensive study led by Borja Toledo-Padrón, a doctoral student at the University of La Laguna’s Institute of Astrophysics of the Canary Islands.

Edward Guinan and Scott Engle (two astrophysicists from Villanova University) were co-authors on this study, as was Ignasi Ribas – a researcher with the IEEC, the Institute of Space Sciences (ICE, CSIC) and the director of the Monstec Astronomical Observatory. In addition, all three researchers were part of the discovery team responsible for finding Barnard b, with Ribas being the lead on the discovery paper.

At the time of its discovery, the team was able to demonstrate that Barnard’s b was just over three times as massive as Earth and orbited its parent star once every 233 days. While it orbits Barnard’s Star at a distance of about 0.4 AU – roughly the same distance between Mercury and the Sun – the planet only receives about 2% of the energy from it’s star as the Earth receives from the Sun.

Based on these findings, scientists hypothesized that Barnard’s Star b was not likely to be habitable. However, as Guinan and Engle indicated, there are still possible scenarios in which subterranean life could exist. These include the possibility that while the surface may be icy cold, geological activity might allow for life beneath the surface.

As Guinan explained it in the course of their presentation:

“Geothermal heating could support “life zones” under its surface, akin to subsurface lakes found in Antarctica. We note that the surface temperature on Jupiter’s icy moon Europa is similar to Barnard b but, because of tidal heating, Europa probably has liquid oceans under its icy surface.”

As luck would have it, this planet may be observable in the not-too-distant future. Though Barnard b is very faint, next-generation telescopes equipped with adaptive optics – like the Thirty Meter Telescope (TMT), the Giant Magellan Telescope (GMT), and the Extremely Large Telescope (ELT) – could allow for direct imaging studies of this planet.

These observations will shed light on the nature of the planet’s atmosphere, its surface, and its potential to support life. “Barnard’s Star has been on our radar for a long time,” said Guinan. “In 2003 it became a founding star member of the Villanova ‘Living with a Red Dwarf’ program that has been sponsored by the National Science Foundation/National Aeronautical and Space Administration (NASA).”

In addition, these observations will help scientists to learn more about the kinds of planets that form around the most common type of star in our galaxy – M-type red dwarfs. As Engle explained:

“The most significant aspect of the discovery of Barnard’s star b is that the two nearest star systems to the Sun are now known to host planets. This supports previous studies based on Kepler Mission data, inferring that planets can be very common throughout the galaxy, even numbering in the tens of billions. Also, Barnard’s Star is about twice as old as the Sun – about 9 billion years old compared to 4.6 billion years for the Sun. The universe has been producing Earth-size planets far longer than we, or even the Sun itself, have existed.”

After many years of study and speculation, future surveys could finally determine if the nearest planets to Earth (like Proxima b, Gliese 667 Cc, f, and e, and TRAPPIST-1d, e, f and g) could actually be habitable and (fingers crossed!) inhabited. In the meantime, any research that shows there is a distinct possibility of that is certainly encouraging!