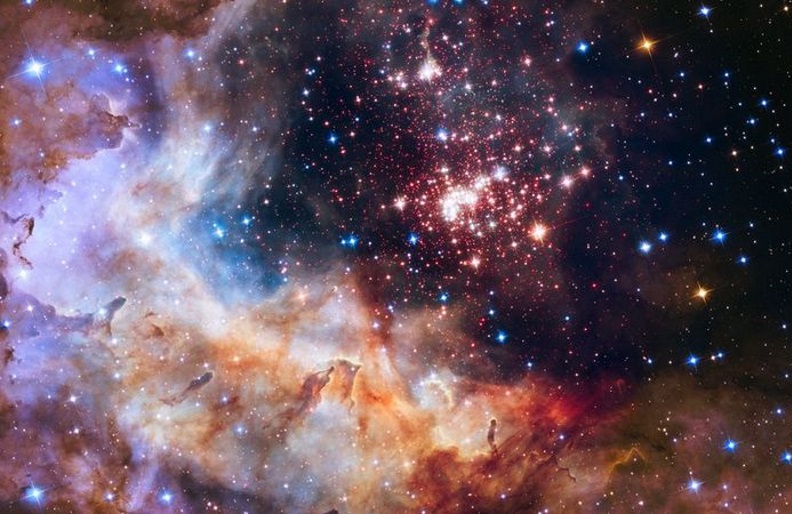 The Hubble Space Telescope has captured a spectacular image showing a vast collection of galaxies located around 4 billion light-years from Earth.

The cluster, known as Abell 370—located in the constellation Cetus—is the first target of a new Hubble mission known as the BUFFALO survey, which aims to broaden our understanding of the cosmos by searching for some of the earliest and most distant galaxies in the universe. It will do this by observing six massive galaxy clusters.

“Galaxy clusters are the most massive objects observable in our universe,” Mathilde Jauzac, an astronomer at Durham University who is involved in the BUFFALO project, told Newsweek. “In this image, you can see a few thousand galaxies that are part of the cluster, but also [some] that lie in front or behind the cluster itself.”

Hubble has already detected some of the oldest known galaxies, albeit only a handful, making it difficult for astronomers to know whether they represent the universe at large.

The BUFFALO team is focusing on the massive galaxy clusters to take advantage of a cosmological trick known as “gravitational lensing,” which can help astronomers see faint objects that may not be viewable otherwise.

Essentially, we can think of it as nature’s magnifying glass. The immense mass of Abell 370—which is made up of both normal and dark matter—and its resulting gravitational influence bends and distorts the light coming from even more distant objects behind it.

Dark matter is a hypothetical substance that scientists believe makes up around 85 percent of all the matter in the universe, although, to date, it has never been directly observed. It does not appear to interact with observable electromagnetic radiation, such as light, making it extremely difficult to detect directly with normal astronomical technology.

“Galaxy clusters are the most massive observable objects in our universe and are thus the largest reservoirs of dark matter,” Jauzac said. “Dark matter is the most common matter species in our universe. However, we cannot observe it directly. But we can indirectly see where it is with such an image. We do this while using the gravitational lensing effect: The mass of the cluster deflects, distorts the light coming from galaxies behind it. These background galaxies are thus visible in the cluster as magnified images.”

She added, “Galaxy clusters are thus behaving as cosmic telescopes. So not only can you study dark matter itself with lensing, you can also see further away in the universe, meaning you can look back in time and thus observe some of the very first galaxies.”

From the image captured by Hubble, the astronomers can estimate the total mass of the cluster by measuring how much the background galaxies are being distorted by gravitational lensing, which enables them to work out its total amount of dark matter.

“Now, we know clusters are made of three components: stars, gas and dark matter,” Jauzac said. “Stars are visible in the optical, near infrared, and the gas is observable in the X-rays. We can thus measure the mass of these two components directly. From lensing we have the total mass. So by doing a subtraction we can recover the amount of dark matter.”

Lensing can be seen numerous times in the image and is perhaps best demonstrated by a feature visible just below the center of the cluster, which has been nicknamed “the Dragon.” It’s made up several duplicated images of a spiral galaxy that lies beyond Abell 370, around 5 billion light-years away.

The BUFFALO survey—which stands for Beyond Ultra-Deep Frontier Fields and Legacy Observations—was designed to succeed the Frontier Fields project, which observed the same six galaxy clusters. BUFFALO’s main goal is to investigate how and when the most massive and luminous galaxies in the universe formed and how early galaxy formation is linked to dark matter assembly.

This will enable astronomers to determine how rapidly galaxies formed in the first 800 million years after the Big Bang, paving the way for future observations with the upcoming James Webb Space Telescope—a next-generation space observatory.

BUFFALO will be able to detect the most distant galaxies around 10 times more efficiently than the Frontier Fields program because of its extended field of view. This will allow for better three-dimensional mapping of the mass distribution of both ordinary and dark matter within each galaxy cluster.

“We can learn where and how dark matter is distributed in the cluster and look at its possible interactions with the stars and the gas to try to understand what it is made of,” Jauzac said. “We can also look back in time and observe the very first galaxies that made our universe, giving us a better understanding of how it evolved.”

Hubble, which is jointly run by NASA and the European Space Agency, has been operating for more than 28 years. In that time, it has captured some of the most dramatic and striking images of our universe. While not the first space observatory to be launched, it is both one of the largest and most versatile, providing astronomers with numerous options for observing the cosmos.