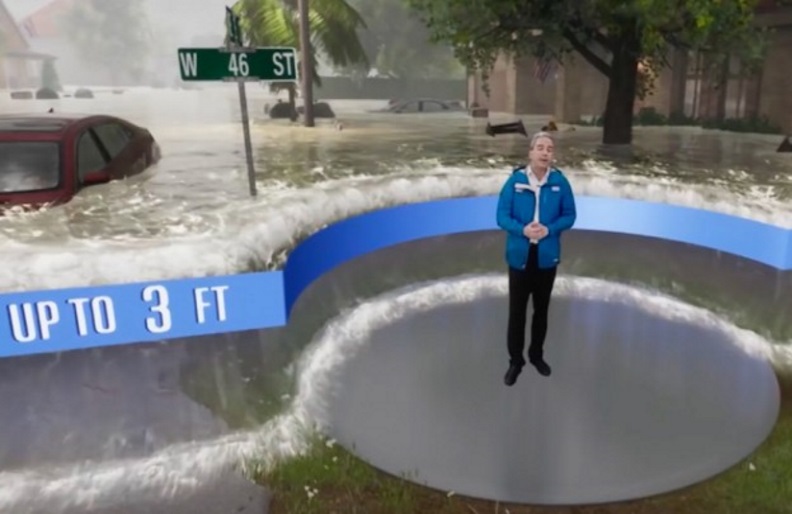 Mixed reality is a fairly new development that allows us to experience a broad range of hypothetical scenarios in real time, resulting in powerful simulations.
Unlike its equally effective equivalent of augmented reality, it uses virtual objects to give the appearance that they are existing in the real world. In whatever situation the technology is applied, the results are always surprising.
A recent example involves The Weather Channel’s use of the mixed reality to drive home the point about the seriousness of the storm surge of Hurricane Florence.
The North Carolina Coast has been identified as the most vulnerable area for impact, where water could rise as high as 4 meters.

To illustrate this again, meteorologist Erika Navarro used mixed media to give an idea of how a storm surge would impact us on a human scale, focusing on the impact of the inland areas.

Storm surge will be a huge factor for Hurricane #Florence Check out what it might look like with @TWCErikaNavarro: pic.twitter.com/TPqTZTmiAM

Replacing the familiar weather map background with an image of a residential neighborhood, Navarro, who stands only 157cm tall, is dwarfed within seconds by the storm surge as it continues to rise. “This water’s over my head,” adding, “I wouldn’t be able to stand here, even withstand the force of of the water coming in. There might even be dangers, like chemicals and exposed power lines lurking in the waters.”

With weather warnings, seeing is believing

This technology aims to quiet the skepticism or disbelief experienced by some residents, with the hopes that it will lead to them taking faster action to evacuate.
This is a familiar challenge for weather forecasters and meteorologists, as some people who live in hurricane-vulnerable areas tend to either not understand the full impact of an approaching storm, or either choose to take the approach of downplaying its severity.
“It was created to evoke an automatic visceral reaction, to imagine that this could be real,” shared Michael Potts, Weather Channel’s vice president of design, “And people are sharing it with friends and family as a warning tool. The amount of engagement across all of our platforms has been some of the highest we’ve ever seen.”

This is excellent timing, as the channel announced earlier this year plans to enhance its 3-year-old augmented reality technology capabilities even further by partnering with The Future Group to utilize its Frontier immersive mixed reality (IMR) technology platform which is powered by Unreal Engine.

Thanks to this, the impact of Navarro’s words are much stronger. “All the graphics you see, from the cars, the street, the houses and the entire neighborhood are created using the Unreal Engine — they are not real. The circle she is standing in is the presentation area, it’s a ‘safe’ space that is not affected by the weather. The maps and data are all real-time and the atmospheric conditions are driven by the forecast.”