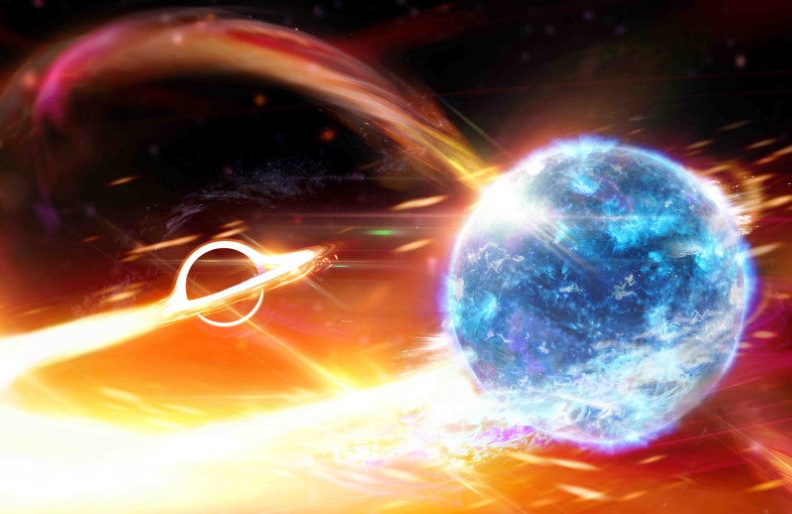 Astronomers have detected a gravitational wave signal that appears to have been caused by a black hole swallowing a neutron star. Aside from being an incredible cosmic cataclysm to witness, this detection is important for another reason: it may be the final point in the gravitational wave trifecta.

Gravitational waves are ripples in the very fabric of spacetime itself. They’re created by some of the most energetic events in the universe, such as collisions between massive objects like black holes. While Einstein himself predicted their existence over a century ago, they weren’t directly detected until 2015.

Since then, dozens more signals have poured in, thanks to purpose-built detectors like LIGO and Virgo. Most of these detections have been the result of two black holes colliding, but waves from two neutron stars smashing into each other have also been found, with astronomers then watching the light show in the sky with optical telescopes.

But there’s a third type of event that has so far evaded detection: a black hole consuming a neutron star. And now, astronomers are pretty sure they’ve found exactly that.

On August 14, LIGO and Virgo detected gravitational waves coming in from about 900 million light-years away. That alone is nothing out of the ordinary, but in this case, the size of the objects suggests it was an elusive neutron star/black hole merger (NSBH).

To figure out what kind of merger they’re looking at, astronomers can analyze the gravitational wave data to estimate the masses of each object in the collision, and from there figure out what each one was. If both objects are between one and three solar masses, they’re most likely neutron stars. If both are more than five solar masses, the event probably involved two black holes.

But in the case of last Wednesday’s detection, one object was found to be more than five solar masses, while the other came in under three. That heavily suggests this is a collision between a black hole and a neutron star.

If this sounds familiar, that’s because a similar detection occurred back in April this year. While this earlier event was an NSBH candidate, the signal was unfortunately quite weak, with astronomers giving it just a 13 percent chance of being this type. It was far more likely to be two neutron stars at 49 percent, and in fact, there was a higher chance of it being Earthly interference (at 14 percent) than an NSBH.

For this new detection, on the other hand, scientists are far more certain. According to LIGO, the chances are greater than 99 percent that it was an NSBH event. Of course, further analysis will be required to confirm the exact size of the two objects.

That said, there is another possibility, but it’s even more exotic – tiny black holes.

“Scientists have never detected a black hole smaller than five solar masses or a neutron star larger than about 2.5 times the mass of our Sun,” says Professor Susan Scott, Chief Investigator with the ARC Centre of Excellence for Gravitational Wave Discovery. “Based on this experience, we’re very confident that we’ve just detected a black hole gobbling up a neutron star. However, there is the slight but intriguing possibility that the swallowed object was a very light black hole – much lighter than any other black hole we know about in the universe. That would be a truly awesome consolation prize.”

The final results are yet to be published, and when they are hopefully we’ll have a clearer understanding.