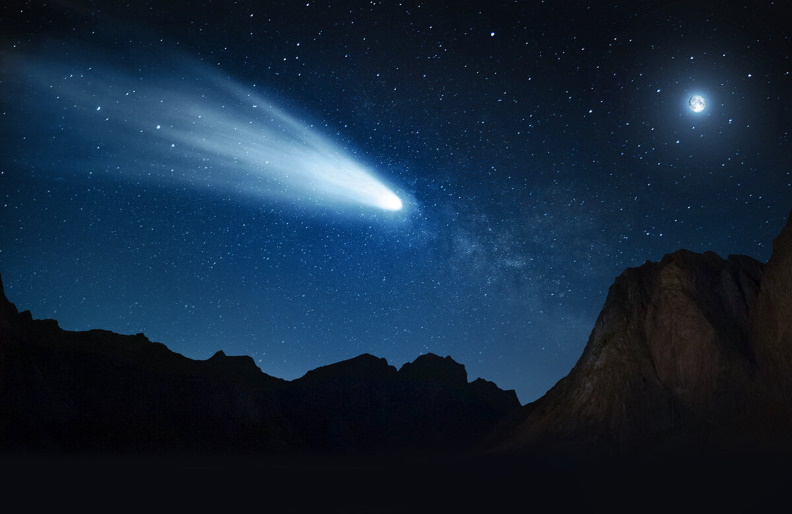 A new study led by a University of Central Florida researcher may fundamentally alter our understanding of how comets arrive from the outskirts of the solar system and are funneled to the inner solar system coming closer to Earth.

In a study to be published in the Astrophysical Journal Letters this week, scientist Gal Sarid and co-authors describe the discovery of an orbital “gateway” through which many comets pass before they approach our sun. The gateway was uncovered as part of a simulation of centaurs, small icy bodies traveling on chaotic orbits between Jupiter and Neptune. The study team modeled the evolution of bodies from beyond Neptune’s orbit, through the giant planet’s region, and inside Jupiter’s orbit. These icy bodies are considered nearly pristine remnants of material from the birth of our solar system.

For a long time, the pathway of comets from their original formation location inward toward the sun has been debated.

Read more: All comets in the solar system might come from the same place

“How do new comets, controlled by Jupiter’s influence, replace those that are lost? Where is the transition between residing in the outer solar system, as small dormant bodies, and becoming active inner solar system bodies, exhibiting a widespread gas and dust coma and tail?” asks Sarid, the lead scientist for the study. These questions remained a mystery until now. “What we discovered, the gateway model as a ‘cradle of comets,’ will change the way we think about the history of icy bodies,” he says.

Centaurs are thought to originate in the Kuiper Belt region beyond Neptune and are considered as the source of Jupiter Family Comets, which occupy the inner solar system. The chaotic nature of centaur orbits obscures their exact pathways making it difficult to predict their future as comets. When icy bodies such as centaurs or comets approach the sun, they begin to release gas and dust to produce the fuzzy appearance of the coma and extended tails that we refer to as comets. This display is among the most impressive phenomena observable in the night sky, but it is also a fleeting flicker of beauty that is rapidly followed by either the destruction of the comet or its evolution to a dormant state, Sarid says.

The original goal of the investigation was to explore the history of a peculiar centaur– 29P/Schwassmann-Wachmann 1 (SW1), a mid-sized centaur in a nearly circular orbit just beyond Jupiter. SW1 has long puzzled astronomers with its high activity and frequent explosive outbursts that occur at a distance from the sun where ice should not effectively vaporize. Both its orbit and activity put SW1 in an evolutionary middle ground between the other centaurs and the Jupiter Family Comets. The research team wanted to explore whether SW1’s circumstances were consistent with the orbital progression of the other centaurs, Sarid says.

“More than one in five centaurs that we tracked were found to enter an orbit similar to that of SW1 at some point in their lifetime,” said Maria Womack, a Florida Space Institute scientist and co-author of the study. “Rather than being a peculiar outlier, SW1 is a centaur caught in the act of dynamically evolving into a JFC.” In addition to the commonplace nature of SW1’s orbit, the simulations lead to an even more surprising discovery, Womack says.

“Centaurs passing through this region are the source of more than two thirds of all JFCs, making this the primary gateway through which these comets are produced,” says Womack. The Gateway region does not hold resident objects for long, with most centaurs becoming JFCs within a few thousand years. This is a short portion of any solar system object’s lifetime, which can span millions and sometimes billions of years.

The presence of the gateway provides a long sought-after means of identifying the centaurs on an imminent trajectory toward the inner solar system. SW1 is currently the largest and most active of the handful of objects discovered in this gateway region, which makes it a “prime candidate to advance our knowledge of the orbital and physical transitions that shape the comet population we see today,” Sarid says.

Our understanding of comets is intimately linked to knowing our solar system’s early composition and the evolution of conditions for atmospheres and life to arise, the researchers said.