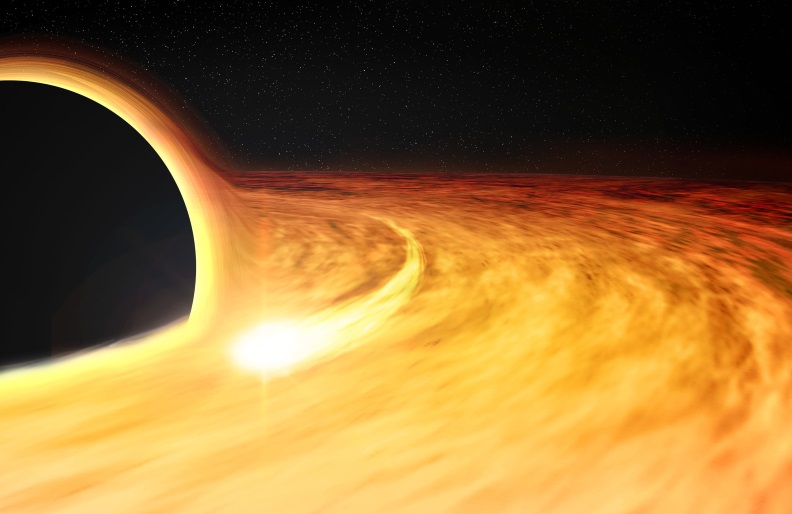 On Nov. 22, 2014, astronomers spotted a rare event in the night sky: A supermassive black hole at the center of a galaxy, nearly 300 million light years from Earth, ripping apart a passing star. The event, known as a tidal disruption flare, for the black hole’s massive tidal pull that tears a star apart, created a burst of X-ray activity near the center of the galaxy. Since then, a host of observatories have trained their sights on the event, in hopes of learning more about how black holes feed.

Now researchers at MIT and elsewhere have pored through data from multiple telescopes’ observations of the event, and discovered a curiously intense, stable, and periodic pulse, or signal, of X-rays, across all datasets. The signal appears to emanate from an area very close to the black hole’s event horizon—the point beyond which material is swallowed inescapably by the black hole. The signal appears to periodically brighten and fade every 131 seconds, and persists over at least 450 days.

The researchers believe that whatever is emitting the periodic signal must be orbiting the black hole, just outside the event horizon, near the Innermost Stable Circular Orbit, or ISCO—the smallest orbit in which a particle can safely travel around a black hole.

Given the signal’s stable proximity to the black hole, and the black hole’s mass, which researchers previously estimated to be about 1 million times that of the sun, the team has calculated that the black hole is spinning at about 50 percent the speed of light.

The findings, reported today in the journal Science, are the first demonstration of a tidal disruption flare being used to estimate a black hole’s spin.

The study’s first author, Dheeraj Pasham, a postdoc in MIT’s Kavli Institute for Astrophysics and Space Research, says that most supermassive black holes are dormant and don’t usually emit much in the way of X-ray radiation. Only occasionally will they release a burst of activity, such as when stars get close enough for black holes to devour them. Now he says that, given the team’s results, such tidal disruption flares can be used to estimate the spin of supermassive black holes—a characteristic that has been, up until now, incredibly tricky to pin down.

“Events where black holes shred stars that come too close to them could help us map out the spins of several supermassive black holes that are dormant and otherwise hidden at the centers of galaxies,” Pasham says. “This could ultimately help us understand how galaxies evolved over cosmic time.”

Pasham’s co-authors include Ronald Remillard, Jeroen Homan, Deepto Chakrabarty, Frederick Baganoff, and James Steiner of MIT; Alessia Franchini at the University of Nevada; Chris Fragile of the College of Charleston; Nicholas Stone of Columbia University; Eric Coughlin of the University of California at Berkeley; and Nishanth Pasham, of Sunnyvale, California.

Theoretical models of tidal disruption flares show that when a black hole shreds a star apart, some of that star’s material may stay outside the event horizon, circling, at least temporarily, in a stable orbit such as the ISCO, and giving off periodic flashes of X-rays before ultimately being fed by the black hole. The periodicity of the X-ray flashes thus encodes key information about the size of the ISCO, which itself is dictated by how fast the black hole is spinning.

Pasham and his colleagues thought that if they could see such regular flashes very close to a black hole that had undergone a recent tidal disruption event, these signals could give them an idea of how fast the black hole was spinning.

They focused their search on ASASSN-14li, the tidal disruption event that astronomers identified in November 2014, using the ground-based All-Sky Automated Survey for SuperNovae (ASASSN).

“This system is exciting because we think it’s a poster child for tidal disruption flares,” Pasham says. “This particular event seems to match many of the theoretical predictions.”

The team looked through archived datasets from three observatories that collected X-ray measurements of the event since its discovery: the European Space Agency’s XMM-Newton space observatory, and NASA’s space-based Chandra and Swift observatories. Pasham previously developed a computer code to detect periodic patterns in astrophysical data, though not for tidal disruption events specifically. He decided to apply his code to the three datasets for ASASSN-14li, to see if any common periodic patterns would rise to the surface.

What he observed was a surprisingly strong, stable, and periodic burst of X-ray radiation that appeared to come from very close to the edge of the black hole. The signal pulsed every 131 seconds, over 450 days, and was extremely intense—about 40 percent above the black hole’s average X-ray brightness.

“At first I didn’t believe it because the signal was so strong,” Pasham says. “But we saw it in all three telescopes. So in the end, the signal was real.”

Based on the properties of the signal, and the mass and size of the black hole, the team estimated that the black hole is spinning at least at 50 percent the speed of light.

“That’s not super fast—there are other black holes with spins estimated to be near 99 percent the speed of light,” Pasham says. “But this is the first time we’re able to use tidal disruption flares to constrain the spins of supermassive black holes.”

Once Pasham discovered the periodic signal, it was up to the theorists on the team to find an explanation for what may have generated it. The team came up with various scenarios, but the one that seems the most likely to generate such a strong, regular X-ray flare involves not just a black hole shredding a passing star, but also a smaller type of star, known as a white dwarf, orbiting close to the black hole.

Such a white dwarf may have been circling the supermassive black hole, at ISCO—the innermost stable circular orbit—for some time. Alone, it would not have been enough to emit any sort of detectable radiation. For all intents and purposes, the white dwarf would have been invisible to telescopes as it circled the relatively inactive, spinning black hole.

“The problem with this scenario is that, if you have a black hole with a mass that’s 1 million times that of the sun, and a white dwarf is circling it, then at some point over just a few hundred years, the white dwarf will plunge into the black hole,” Pasham says. “We would’ve been extremely lucky to find such a system. But at least in terms of the properties of the system, this scenario seems to work.”

The results’ overarching significance is that they show it is possible to constrain the spin of a black hole, from tidal disruption events, according to Pasham. Going forward, he hopes to identify similar stable patterns in other star-shredding events, from black holes that reside further back in space and time.

“In the next decade, we hope to detect more of these events,” Pasham says. “Estimating spins of several black holes from the beginning of time to now would be valuable in terms of estimating whether there is a relationship between the spin and the age of black holes.”

More information: “A loud quasi-periodic oscillation after a star is disrupted by a massive black hole,” Science (2019). dx.doi.org/10.1126/science.aar7480

Provided by: Massachusetts Institute of Technology