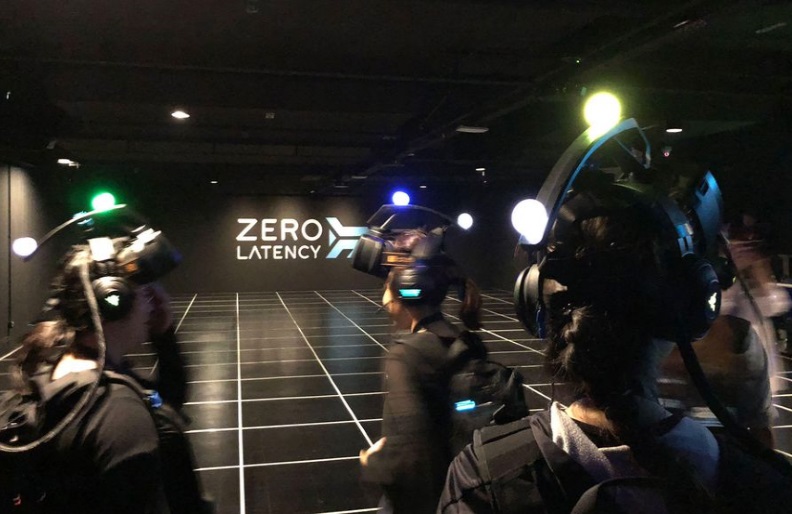 You can explore a virtual gravity-defying world, or you can shoot zombies and blast killer robots if that’s more to your liking.

If there’s one thing holding VR back today, it’s that you’re pretty much stuck in a small place, unable to explore the virtual worlds you’re in. But Zero Latency’s free-roaming arena could be just the thing.

Based in Melbourne, Australia, the VR entertainment company is expanding worldwide. It’s partnering with Singapore firm Tomorrow Entertainment to open an outlet there. Other outlets in the US, Japan and Europe use the same tech.

Having tried it, I can tell you it’s amazing, even better than the VR arcade experience .

For one thing, you’re not limited by a small space or hampered by wires. And because there’s so much space, you don’t have to go on the VR adventure alone. Each session is able to accommodate up to eight players, and it’s fascinating to watch your fellow players walk vertically up walls or walk above you as you play Engineerium, the first game I tried out.

I never once bumped into another player during my 15 minutes of play, but the system does let you know if you’re too close. Even with eight players navigating the virtual world, Engineerium is so cleverly designed that the players move from A to B to C in an intricate dance without anyone realising it or bumping into each other.

The real fun starts with Zombie Survival, another 15-minute session which sees you stuck in a dropzone with your buddies as zombies swarm your flimsy fort made up of debris.

You can ride elevators up and down, getting vantage points to support your teammates on the ground, and blast fuel canisters to blow up the hordes trying to breach your defences. If you love Left 4 Dead, you’ll love Zombie Survival.

I was also invited to try the 30-minute Singularity game, but I was already feeling tired and slightly disorientated from my previous two sessions. My teammates felt the same, so we didn’t get to hop on a space station to blast killer robots. Even though the entire playthrough took place in an air-conditioned environment, the headgear still felt hot after half an hour of exertion.

Those living in the US can find Zero Latency outlets in Orlando, Florida, Pocono, Pennsylvania and Wisconsin Dells, Wisconsin. There are also outlets in Tokyo, Japan and Madrid, Spain. Prices for those outlets may vary, as some of them are using the tech licensed from Zero Latency.

If you’re in Southeast Asia, you’ll have to head to Singapore to get in on the action. But be forewarned, it’s not exactly cheap at around $50 (or prices that convert to about £40 or AU$65) for a 30-minute session.