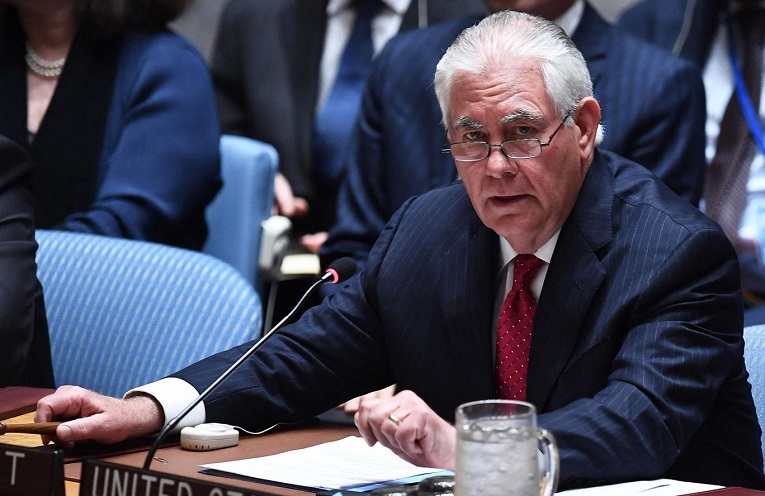 ‘All options for responding to future provocation must remain on the table,’ says US Secretary of State Rex Tillerson

US Secretary of State Rex Tillerson has urged for new international sanctions to be placed on North Korea, saying that failing to act would lead to ‘catastrophic consequences’.

“All options for responding to future provocation must remain on the table. Diplomatic and financial levers of power will be backed up by a willingness to counteract North Korean aggression with military action if necessary,” Mr Tillerson said. “We much prefer a negotiated solution to this problem but we are committed to defending ourselves and our allies against North Korean aggression.”

Mr Tillerson said that the sanctions would be tough on North Korea and that the country would face hardships in the future should it not adhere for demands that it stop testing its nuclear arsenal.

“This new pressure campaign will be swiftly implemented and painful to North Koran interest,” Mr Tillerson said, noting that nations allied to North Korea may not approve. “But the catastrophic effects of a North Korean nuclear strike outweigh any economic benefits. We must be willing to face the hard truths and mark hard choices right now to prevent disastrous outcomes in the future. Business as usual is not an option.”

The leaders of the United Kingdom and Japan, speaking at a joint conference in Britain, echoed Mr Tillerson’s concerns.

“North Korea’s missile tests are a threat to global peace and security and Britain will work with international partners to maintain pressure on Pyongyang,” Prime Minister Theresa May said. “In the face of this belligerence, we stand steadfast in our condemnation of such destabilising activity.”

Ms May also reiterated her support for working with the international community to resolve the issue.

“Prime Minister Abe and I have agreed that we will continue to work with our international partners to maintain pressure on North Korea and counter the security threat posed by its illegal pursuit of nuclear options and work towards a peaceful resolution.”

The hard stance on North Korea’s nuclear testing was not praised by all of the international community, however. Russia Deputy Foreign Minister Gennady Gatilov warned that an escalation to violence would be “completely unacceptable”.

“The combative rhetoric coupled with reckless muscle-flexing has led to a situation where the whole world seriously is now wondering whether there’s going to be a war or not,” he told the UN. “One ill thought out or misinterpreted step could lead to the most frightening and lamentable consequences.”

Given the relationship between Russia and its neighbour North Korea, that response is not surprising, but addressing the UN, UK Foreign Secretary Boris Johnson called on China and Russia to use their influence with Pyongyang to “restrain” the regime and its “blood-curdling threats”.

He said: “There could hardly be a clearer threat to world peace more demanding of a unified response than the activities of one member of the United Nations, North Korea breaking its treaty obligations, ignoring the will of this council, and making blood-curdling threats to inflict grievous harm on peoples of other countries.

“We urge other partners with direct influence on North Korea to use their leverage to the full with the aim of easing tensions and ensuring compliance with the express will of the UN.

“There is a vital role for China and Russia, both of whom are neighbours of North Korea with influence on Pyongyang, and as permanent members of this council, a special responsibility they have for preserving international peace and security.

Earlier in the week, the Trump administration took the unusual step of inviting all 100 members of the United States Senate for a special White House briefing on the country’s threat and what strategies the administration might use to combat it.

Mr Trump also said on Thursday during an Oval Office interview with Reuters that he wanted to resolve the escalating crisis peacefully but stopped short of ruling out military options.

“There is a chance that we could end up having a major, major conflict with North Korea,” Mr Trump said in the interview in which he described the country as his biggest challenge globally. “We’d love to solve things diplomatically but it’s very difficult.”

The Chinese government indicated on Thursday that North Korean nuclear provocations were unacceptable and that continued tensions could cause the peninsula to lose stability, but that the United Nations should not pursue new sanctions now. China, North Korea’s only major ally in the region, has walked a fine line on the issue and has criticized the United States for moving parts of an advanced anti-missile system into South Korea, saying that the radar would damage Chinese security.

“We oppose any behaviour that goes against Security Council resolutions. I think this position is very clear. This is what we have told the United States. I think North Korea is also very clear about this position,” Chinese Foreign Ministry spokesman Geng Shuang said. “If the meeting only focuses on increasing sanctions and pressure, I think this will not only lose a rare opportunity, it may also exacerbate the confrontation between all sides and may damage efforts to promote peace and talks.”