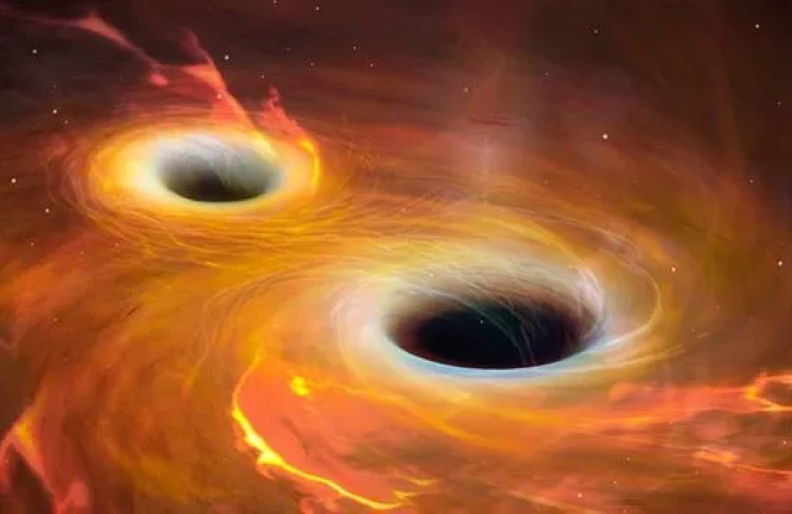 Astronomers have discovered three giant black holes within a titanic collision of three galaxies. Several observatories, including the Chandra X-ray Observatory and other NASA space telescopes, captured the unusual system.

“We were only looking for pairs of black holes at the time, and yet, through our selection technique, we stumbled upon this amazing system,” said Ryan Pfeifle of George Mason University in Fairfax, Virginia, the first author of a new paper in The Astrophysical Journal describing these results. “This is the strongest evidence yet found for such a triple system of actively feeding supermassive black holes.”

To uncover this rare black hole trifecta, researchers needed to combine data from telescopes both on the ground and in space. First, the Sloan Digital Sky Survey (SDSS) telescope, which scans large swaths of the sky in optical light from New Mexico, imaged SDSS J0849+1114. With the help of citizen scientists participating in a project called Galaxy Zoo, it was then tagged as a system of colliding galaxies.

Then, data from NASA’s Wide-field Infrared Survey Explorer (WISE) mission revealed that the system was glowing intensely in infrared light during a phase in the galaxy merger when more than one of the black holes is expected to be feeding rapidly. To follow up on these clues, astronomers then turned to Chandra and the Large Binocular Telescope (LBT) in Arizona.

The Chandra data revealed X-ray sources — a tell-tale sign of material being consumed by the black holes — at the bright centers of each galaxy in the merger, exactly where scientists expect supermassive black holes to reside. Chandra and NASA’s Nuclear Spectroscopic Telescope Array (NuSTAR) satellite also found evidence for large amounts of gas and dust around one of the black holes, typical for a merging black hole system.

“Optical spectra contain a wealth of information about a galaxy,” said co-author Christina Manzano-King of University of California, Riverside. “They are commonly used to identify actively accreting supermassive black holes and can reflect the impact they have on the galaxies they inhabit.”

One reason it is difficult to find a triplet of supermassive black holes is that they are likely to be shrouded in gas and dust, blocking much of their light. The infrared images from WISE, the infrared spectra from LBT and the X-ray images from Chandra bypass this issue, because infrared and X-ray light pierce clouds of gas much more easily than optical light.

“Through the use of these major observatories, we have identified a new way of identifying triple supermassive black holes. Each telescope gives us a different clue about what’s going on in these systems,” said Pfeifle. “We hope to extend our work to find more triples using the same technique.”

“Dual and triple black holes are exceedingly rare,” said co-author Shobita Satyapal, also of George Mason, “but such systems are actually a natural consequence of galaxy mergers, which we think is how galaxies grow and evolve.”

Three supermassive black holes merging behave differently than just a pair. When there are three such black holes interacting, a pair should merge into a larger black hole much faster than if the two were alone. This may be a solution to a theoretical conundrum called the “final parsec problem,” in which two supermassive black holes can approach to within a few light-years of each other, but would need some extra pull inwards to merge because of the excess energy they carry in their orbits. The influence of a third black hole, as in SDSS J0849+1114, could finally bring them together.

Computer simulations have shown that 16% of pairs of supermassive black holes in colliding galaxies will have interacted with a third supermassive black hole before they merge. Such mergers will produce ripples through spacetime called gravitational waves. These waves will have lower frequencies than the National Science Foundation’s Laser Interferometer Gravitational-Wave Observatory (LIGO) and European Virgo gravitational-wave detector can detect. However, they may be detectable with radio observations of pulsars, as well as future space observatories, such as the European Space Agency’s Laser Interferometer Space Antenna (LISA), which will detect black holes up to one million solar masses.