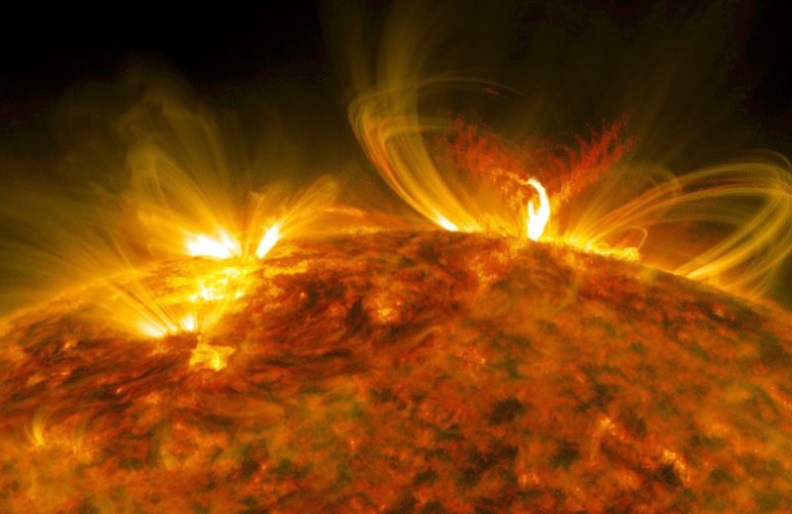 In September 2017, a series of moderate to extreme flares jetted outward from the Sun’s surface. Among them was a monster X8.2 class flare that occurred on 10 September and was one of the largest flares of the current, but nearly completed, 11-year solar cycle. This flare and the other jets generated waves of space weather, auroras, and, at times, communication difficulties here on Earth.

On Mars, the flares had consequences, too, new studies reveal.

Observations made at the Red Planet show that Mars’s upper atmosphere heated unevenly (perhaps because of underlying chemical differences, the study’s authors propose). In areas where the atmosphere heated significantly, additional measurements showed that the top two layers of the upper atmosphere, called the thermosphere and ionosphere, interacted with each other in response to the flare. Because of that, molecular oxygen (O2) escaped to space at a much higher rate than normal.

Past studies have shown that Mars likely started out with a much thicker and more oxygen rich atmosphere than it has today. When and how oxygen escapes from Mars, as well as the mechanism behind the overall depletion of its atmosphere, have been ongoing questions for decades and central issues in the search for life on Mars.

The new observations are making the study team wonder if, during the billions of years of Mars’s existence, repeated extreme solar flares may have caused cumulative deterioration of the planet’s atmosphere and if it’s time to reconsider how flares fit into the picture of atmospheric depletion on Mars.

“On a fundamental level, a solar flare is nature’s active experiment,” said Edward Thiemann, a research scientist at the Laboratory for Atmospheric and Space Physics at the University of Colorado Boulder. From the results of this particular flare experiment, he suggested, scientists can glean a deeper understanding of how Mars’s atmosphere evolved from its primordial state. They might also gain insight into the habitability of exoplanets around stars more active than the Sun.

Thiemann and his colleagues reported their analysis of Mars’s ionosphere and thermosphere changes in two papers published in Geophysical Research Letters in early May. They also presented their results at the Triennial Earth-Sun Summit in Leesburg, Va., on 23 May.

The 10 September flare emitted 82,000 times the Sun’s normal X-ray output in a short, concentrated burst, according to NASA’s Solar Dynamics Observatory. This type of “extreme” flare occurs fewer than 10 times during one solar cycle.

To track how the Martian atmosphere responded to forcing from this extreme solar event, the researchers used measurements taken by NASA’s Mars Atmosphere and Volatile Evolution Mission (MAVEN) satellite, currently circling the Red Planet. Using a set of high-energy light and spectroscopic observations taken just after the flare peaked, the team monitored how different chemical components of Mars’s atmosphere responded to the flare.

MAVEN is dedicated to studying Mars’s upper atmosphere—particularly the thermosphere and ionosphere—as well as the solar wind at Mars and how it interacts with the planet’s atmosphere. Just after its arrival at Mars in 2014, MAVEN performed the first in situ measurements of how solar flare activity affected another planet, something that had previously been measured only from Earth. However, as the Sun continued to near the minimum in this solar cycle and its activity level continued to decrease, MAVEN scientists became doubtful that they would get another chance at those types of measurements.

The extreme flares of last fall therefore came as quite a surprise to the MAVEN team, but luck was on the observers’ side, Thiemann said. 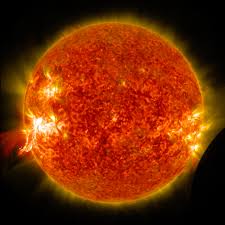 MAVEN’s orbit took it within 155 kilometers of the planet’s surface just 80 minutes after the flare’s peak emission, allowing the first in situ measurements of Mars’s ionosphere and thermosphere responses to an X class solar flare. The satellite measured the temperature, density, and pressure of neutral and ionized molecules and atoms as well as electrons in Mars’s upper atmospheric layers during that orbit.

“If MAVEN had been making observations on the nightside at the time, we may not have been able to observe the atmosphere’s response,” Thiemann said.

First, the thermosphere heated significantly at low to middle latitudes and at high altitudes. This heating caused a brief inflation of the thermosphere while also compressing the carbon dioxide (CO2) in that layer. Because the thermosphere expanded, it interacted more than expected with the ionosphere above, Thiemann said. In the ionosphere, the team saw changes to the O2 and CO2 concentrations that caused oxygen to ionize more quickly and subsequently escape Mars’s atmosphere at a rate 50% higher than average.

Although past studies of Mars’s atmosphere have treated the thermosphere and ionosphere responses separately, Thiemann explained that these results show that the two are fundamentally linked and must be considered in tandem in future models.

These results “are important because all previous studies of flares impacting Mars had to use observations of the Sun from Earth,” said Michael Mendillo, a professor of astronomy at the University of Colorado’s Center for Space Physics in Boulder who was not involved with this research. He added that these results were possible only because “MAVEN’s strong set of in situ instruments are on, essentially, all of the time” and because of that it “is the first satellite to observe flare input conditions directly at Mars.”This is “a neat set of results!” said Mendillo. “Space weather on other worlds is as interesting as here on Earth.”
—Kimberly M. S. Cartier (@AstroKimCartier), Staff Writer