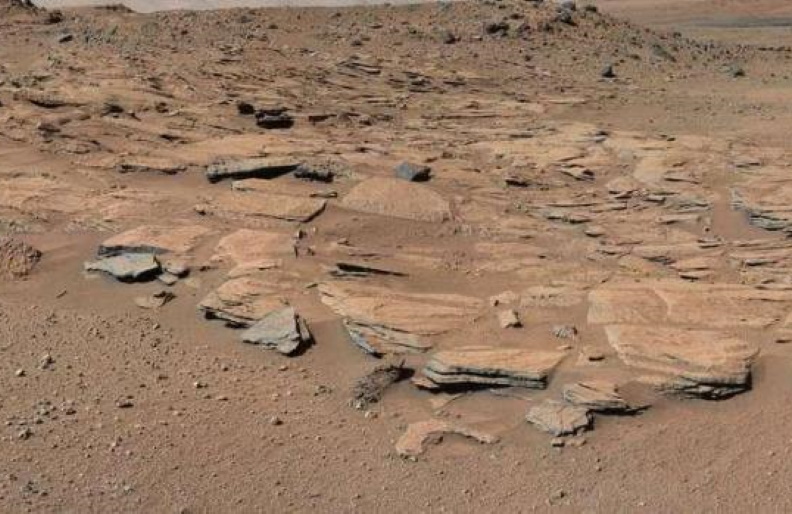 Mars once had salt lakes that are similar to those on Earth and has gone through wet and dry periods, according to an international team of scientists that includes a Texas A&M University College of Geosciences researcher.

Marion Nachon, a postdoctoral research associate in the Department of Geology and Geophysics at Texas A&M, and colleagues have had their work published in the current issue of Nature Geoscience.

The team examined Mars’ geological terrains from Gale Crater, an immense 95-mile-wide rocky basin that is being explored with the NASA Curiosity rover since 2012 as part of the MSL (Mars Science Laboratory) mission.

The results show that the lake that was present in Gale Crater over 3 billion years ago underwent a drying episode, potentially linked to the global drying of Mars.

Gale Crater formed about 3.6 billion years ago when a meteor hit Mars and created its large impact crater.

“Since then, its geological terrains have recorded the history of Mars, and studies have shown Gale Crater reveals signs that liquid water was present over its history, which is a key ingredient of microbial life as we know it,” Nachon said. “During these drying periods, salt ponds eventually formed. It is difficult to say exactly how large these ponds were, but the lake in Gale Crater was present for long periods of time – from at least hundreds of years to perhaps tens of thousands of years,” Nachon said.

So what happened to these salt lakes?

Nachon said that Mars probably became dryer over time, and the planet lost its planetary magnetic field, which left the atmosphere exposed to be stripped by solar wind and radiation over millions of years.

The salt ponds on Mars are believed to be similar to some found on Earth, especially those in a region called Altiplano, which is near the Bolivia-Peru border.

Nachon said the Altiplano is an arid, high-altitude plateau where rivers and streams from mountain ranges “do not flow to the sea but lead to closed basins, similar to what used to happen at Gale Crater on Mars,” she said. “This hydrology creates lakes with water levels heavily influenced by climate. During the arid periods, Altiplano lakes become shallow due to evaporation, and some even dry up entirely. The fact that the Altiplano is mostly vegetation-free makes the region look even more like Mars,” she said.”

Nachon added that the study shows that the ancient lake in Gale Crater underwent at least one episode of drying before “recovering.” It’s also possible that the lake was segmented into separate ponds, where some of the ponds could have undergone more evaporation.

Because up to now only one location along the rover’s path shows such a drying history, Nachon said it might give clues about how many drying episodes the lake underwent before Mars’s climate became as dry as it is currently.

“It could indicate that Mars’s climate ‘dried out’ over the long term, in a way that still allowed for the cyclical presence of a lake,” Nachon said. “These results indicate a past Mars climate that fluctuated between wetter and drier periods. They also tell us about the types of chemical elements (in this case sulfur, a key ingredient for life) that were available in the liquid water present at the surface at the time, and about the type of environmental fluctuations Mars life would have had to cope with if it ever existed.”