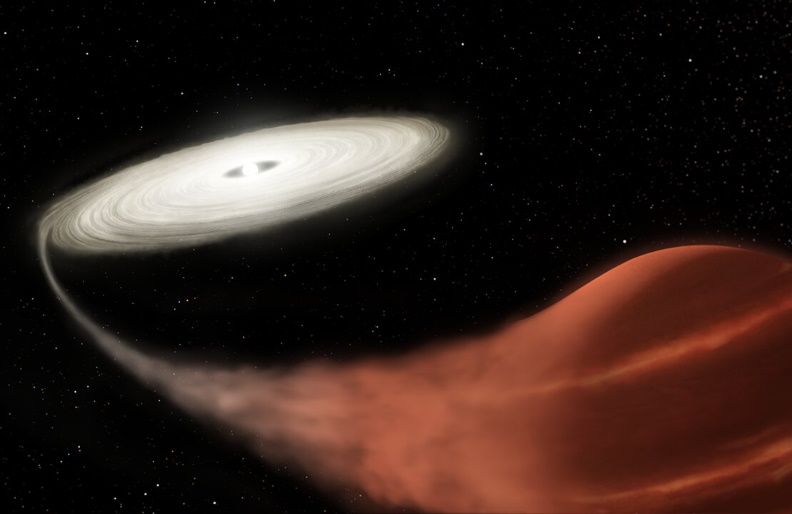 NASA’s Kepler spacecraft was designed to find exoplanets by looking for stars that dim as a planet crosses the star’s face. Fortuitously, the same design makes it ideal for spotting other astronomical transients—objects that brighten or dim over time. A new search of Kepler archival data has uncovered an unusual super-outburst from a previously unknown dwarf nova. The system brightened by a factor of 1,600 over less than a day before slowly fading away.

The star system in question consists of a white dwarf star with a brown dwarf companion about one-tenth as massive as the white dwarf. A white dwarf is the leftover core of an aging Sun-like star and contains about a Sun’s worth of material in a globe the size of Earth. A brown dwarf is an object with a mass between 10 and 80 Jupiters that is too small to undergo nuclear fusion.

It was sheer chance that Kepler was looking in the right direction when this system underwent a super-outburst, brightening by more than 1,000 times. In fact, Kepler was the only instrument that could have witnessed it, since the system was too close to the Sun from Earth’s point of view at the time. Kepler’s rapid cadence of observations, taking data every 30 minutes, was crucial for catching every detail of the outburst.

The event remained hidden in Kepler’s archive until identified by a team led by Ryan Ridden-Harper of the Space Telescope Science Institute (STScI), Baltimore, Maryland, and the Australian National University, Canberra, Australia. “In a sense, we discovered this system accidentally. We weren’t specifically looking for a super-outburst. We were looking for any sort of transient,” said Ridden-Harper.

Kepler captured the entire event, observing a slow rise in brightness followed by rapid intensification. While the sudden brightening is predicted by theories, the cause of the slow start remains a mystery. Standard theories of accretion disk physics don’t predict this phenomenon, which has subsequently been observed in two other dwarf nova super-outbursts.

“These dwarf nova systems have been studied for decades, so spotting something new is pretty tricky,” said Ridden-Harper. “We see accretion disks all over—from newly forming stars to supermassive black holes—so it’s important to understand them.”

Theories suggest that a super-outburst is triggered when the accretion disk reaches a tipping point. As it accumulates material, it grows in size until the outer edge experiences gravitational resonance with the orbiting brown dwarf. This might trigger a thermal instability, causing the disk to get superheated. Indeed, observations show that the disk’s temperature rises from about 5,000–10,000° F (2,700–5,300° C) in its normal state to a high of 17,000–21,000° F (9,700–11,700° C) at the peak of the super-outburst.

This type of dwarf nova system is relatively rare, with only about 100 knowns. An individual system may go for years or decades between outbursts, making it a challenge to catch one in the act.

“The detection of this object raises hopes for detecting even more rare events hidden in Kepler data,” said co-author Armin Rest of STScI.

The team plans to continue mining Kepler data, as well as data from another exoplanet hunter, the Transiting Exoplanet Survey Satellite (TESS) mission, in search of other transients.

“The continuous observations by Kepler/K2, and now TESS, of these dynamic stellar systems, allows us to study the earliest hours of the outburst, a time-domain that is nearly impossible to reach from ground-based observatories,” said Peter Garnavich of the University of Notre Dame in Indiana.

This work was published in the Oct. 21, 2019 issue of the Monthly Notices of the Royal Astronomical Society.