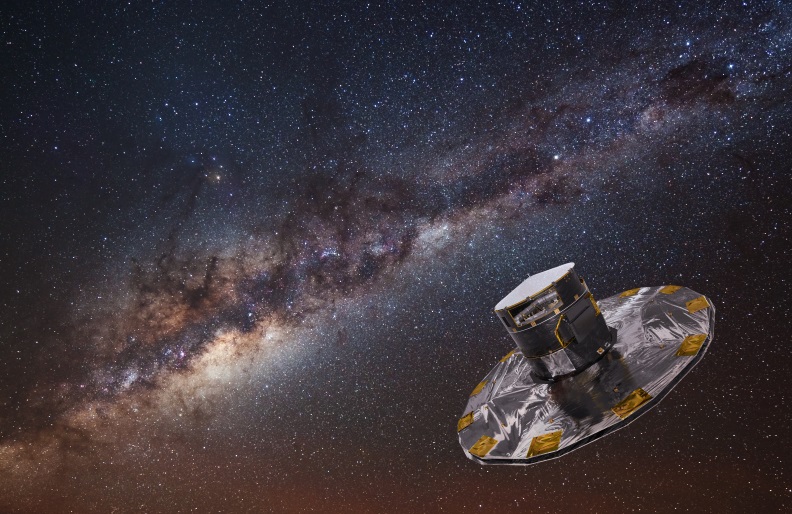 Astronomers have discovered a population of incredibly fast-moving stars bearing down on the Milky Way. It is possible that these newly found “hypervelocity” stellar bodies were created in another galaxy, before being hurled out into intergalactic space on a collision course with the Milky Way.

Our galaxy is populated by over a hundred billion stars, most of which reside in a dense disk located on the galactic plane, and in a bulge surrounding the galactic center, at the heart of which lies a supermassive black hole. The remainder of the stars are distributed in the stellar halo, or sphere, that surrounds our galaxy.

ESA’s Gaia mission was launched on the December 19, 2013, with the ambitious goal of creating a precise three-dimensional map detailing the positions and characteristics of roughly one billion stars, located both within our galaxy, and beyond.

Gaia has already proven to be phenomenally adept at its task.

Following the second data release in April this year, a team of astronomers from Leiden University, Netherlands, seized the opportunity to identify a rare breed of stellar bodies known as hypervelocity stars. These are the some of the fastest moving stars known to science, and travel so swiftly that they are able to break free of the Milky Way’s powerful gravitational influence, and escape into intergalactic space.

Prior to taking flight, hypervelocity stars are thought to reside close to the galactic center. Over time, gravitational interactions with the supermassive black holes thought to reside at the heart of most large galaxies catapult the unlucky stars outward at phenomenal speeds.

To date, only a few hypervelocity stars have been discovered, yet they are a valuable tool for astronomers attempting to reveal some of the mysteries surrounding our enigmatic galaxy. Scientists can glean many insights from analyzing the runaway behemoths, such as discerning the types of stars that orbit near the heart of the Milky Way.

The April data release included super detailed observations of the seven million brightest stars scrutinized by the Gaia satellite. Of these seven million, the authors of the new paper were able to identify 20 that were likely travelling fast enough to escape the Milky Way’s oppressive hold.

There are a number of possible origins for the runaway stars. Arguably the least exciting explanation is that the stellar bodies once resided in the Milky Way’s extended galactic halo, and were subsequently shifted inwards by an interaction with a nearby dwarf galaxy.

Looking a little further afield the stars could have began their lives in the Large Magellanic Cloud – a satellite galaxy of the Milky Way located a little under 200,000 light-years from Earth. The most exotic potential origin for the stellar interlopers is that they were created in the stellar nurseries of a distant galactic neighbor.

Further observations from ground-based telescopes will help shed light on the true origins of the speeding stars by, for example, deducing their composition. The stars that populate the Milky Way’s stellar halo are thought to have a basic composition, with the bulk of their mass comprised of hydrogen. If the stars are found to contain a greater abundance of heavier elements, then it’s a good bet that they came from another galaxy.

If this were found to be the case, the newly-discovered stars would represent an invaluable, accessible source of information for astronomers seeking to understand the characteristics of distant galaxies. The fact that the stars were able to shrug off the gravitational influence of their progenitor galaxy in the first place could suggest two scenarios.

First, that their starting galaxy plays host to a supermassive black hole similar to the Milky Way, which is also capable of ejecting stars from a galactic center. Alternatively, the errant stars could once have belonged to a binary system. The dramatic death of one of the binary stars in a supernova explosion could have been enough to shunt its partner clean out of its home galaxy.

By observing the compositions of the stars, astronomers could also gain an understanding of the chemical makeup of the stellar nursery in which the stars coalesced.

Gaia’s mission is far from complete, with two further massive data releases planned in the 2020s.

“We eventually expect full 3D velocity measurements for up to 150 million stars,” explains the study’s co-author Anthony Brown, chair of the Gaia Data Processing and Analysis Consortium Executive. “This will help find hundreds or thousands of hypervelocity stars, understand their origin in much more detail, and use them to investigate the Galactic centre environment as well as the history of our Galaxy.”

The study has been published in the Monthly Notices of the Royal Astronomical Society.