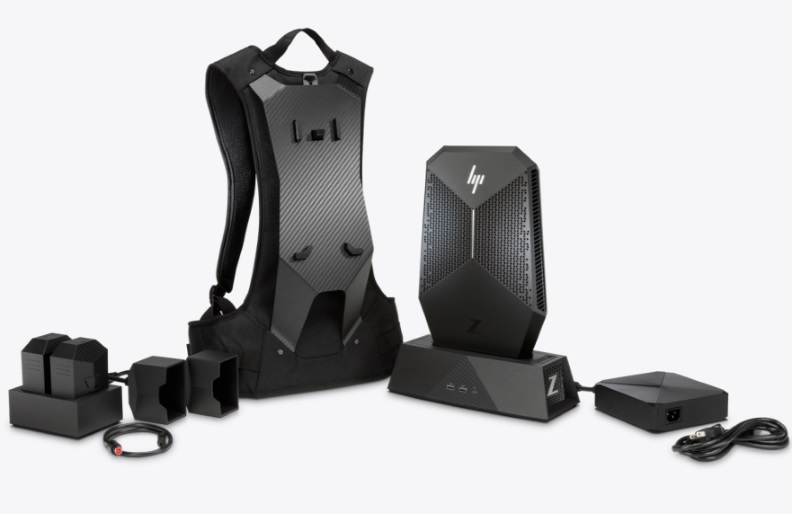 HP is looking to compete directly in the still nascent virtual reality computer market and in the VR software field, too. The firm has announced that a brand-new Mars VR experience is in the works, as well as a new “workstation class” backpack computer designed to enable mobile virtual reality for business training and architectural prototyping. Called the HP Z VR Backpack, the mini PC packs powerful hardware and will be marketed to enterprises looking to take portions of their business into the virtual world.

One of the most requested and anticipated features of the second generation of virtual reality headsets is wireless connectivity. Although we have seen some third-party solutions for existing headsets, HTC sees wireless as an expected feature in VR headsets by 2018. But that’s not the only way to detach tethers for VR headsets. Another solution is a a wearable PC, which HP is backing with its new backpack rig.

HP is not the first company to do this, but it is the latest and arguably its solution is the most powerful yet released with a business focus. Packing a seventh-generation Core i7-7820HQ Vpro processor, alongside 32GB of DDR4 RAM, an Nvidia Quadro P5200 with 16GB of video memory, and up to a terabyte of solid state storage space, it’s a powerful, portable system.

One issue with backpack PCs is battery life, but HP has addressed that with a hot-swappable, dual-battery system which makes it possible for enterprises to keep it running for hours at a time. The whole set-up weighs in at just over 10 pounds and can wirelessly mirror what its wearer sees to a companion system using Miracast.

For developers, HP has also enabled a docking system which makes it possible to jump from desktop to portable VR set-up, making it easier to design something and then test it in VR.

Said to be compatible with a variety of VR headsets, HP suggests using the Z VR Backpack with an HTC Vive Business Edition. Whatever solution its customers opt for though, the intended use for such a system is in training simulations — especially those with potentially dangerous working environments — architectural building walkthroughs, prototyping new products, and in entertainment centers for consumers.

But HP isn’t just working on virtual reality hardware and companion systems, it’s also looking to prototype new software environments. One newly announced joint project it’s working on is Mars Home Planet, a concept that builds upon the foundation of NASA’s own Mars 2030.

Created in conjunction with organizations like Autodesk, Fusion, Launch Forth, Technicolor, Epic Games, and HTC’s Vive division, the Mars experience is designed to imagine what life will be like on Mars once colonization has begun. Beyond the original aims of the 2030 project, how will humanity thrive on the red planet? What will life be like when as many as a million people are living and working there?

Partnered developers will leverage Autodesk’s 3D models to create all of the assets for the project and will then bring them together within the Unreal Engine to create the virtual reality simulation. The experience will be created with real-life engineering and logistics challenges in mind, really digging into the potential difficulties faced in building a viable settlement on Mars.

Although many engineers, designers, and developers have already signed on to the project, HP is still looking to increase their numbers. If you feel like you might have something to contribute to the project, head to HP’s Mars Home Planet page to sign up.

All of this is part of HP’s new virtual reality strategy, which sees it investing heavily in not only providing the hardware to enable it, but some of the software platforms to realize its potential. It’s partnering up with a large number of other heavy hitters in other industries and is bringing to bear real expertise, which could see it have a major stake in the VR industry moving forward.

This article was originally published by Digital Trends. Read the original article.