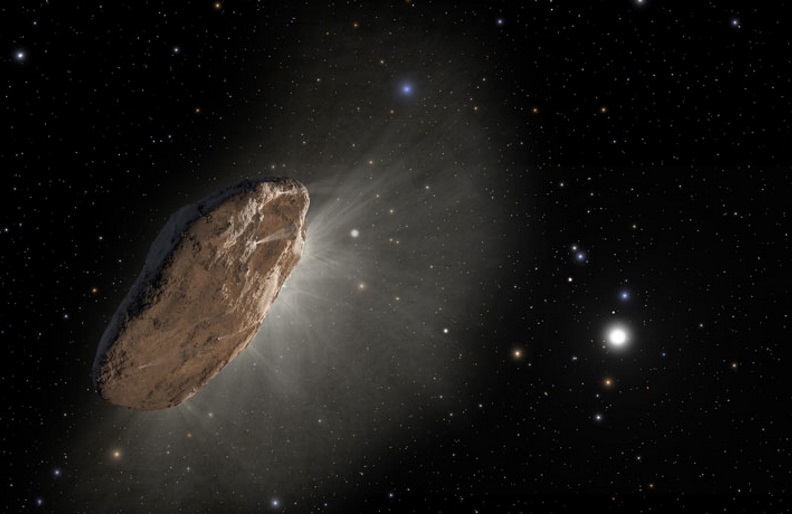 The first known interstellar visitor to the solar system is keeping astronomers guessing.

Ever since it was spotted in October 2017, major mysteries have dogged the object, known as ‘Oumuamua (SN Online: 10/27/17). Astronomers don’t know where it came from in the galaxy. And they’ve disagreed over whether ‘Oumuamua is an asteroid, a comet or something else entirely.

One of the strangest mysteries is how ‘Oumuamua sped up after it slung around the sun and fled the solar system, a motion that can’t be explained by the gravitational forces of the sun or other celestial bodies alone. The most natural explanation is that ‘Oumuamua spouts gas like a comet, which would have given the object an extra push away from the sun — except astronomers saw no signs of such outgassing.

In November, Harvard University astronomers Shmuel Bialy and Avi Loeb sparked a firestorm of media coverage when they suggested that the acceleration could be explained if ‘Oumuamua is an alien spaceship, in a paper published in Astrophysical Journal Letters. In particular, the duo suggested, the object could be a solar sail: a large flat sheet less than 1 millimeter thick that uses pushes from starlight to navigate the galaxy (SN: 9/10/11, p. 18). Loeb is part of an organization called the Breakthrough Initiative that has suggested sending solar sails to visit a nearby planet orbiting the star Proxima Centauri (SN Online: 8/25/16). Maybe some other spacefaring civilization sent a similar sail to visit us, Loeb argues.

Since then, astronomers have been kicking around other origin stories to explain ‘Oumuamua and its bizarre behavior. “Jumping to the conclusion that it has to be produced by extraterrestrial intelligence, I think we don’t have evidence for it yet,” says astronomer Amaya Moro-Martín of the Space Telescope Science Institute in Baltimore. “There are other natural explanations that can be explored.”

Here are three such possibilities.

To get a push from starlight, an object needs to have a large surface area — to provide more surfaces for particles of light called photons to nudge — and a small mass, so that even tiny amounts of photon pressure can make a difference.

A flat sheet, such as a solar sail, isn’t the only way to harness this radiation pressure, Moro-Martín says. A fluffy, porous structure that resembles a fractal, a geometric pattern that repeats itself on smaller and larger scales, could also be propelled by light, she argues. “Physically it would be the same idea, just the geometry would be different.”

Dust particles collected in Earth’s stratosphere can have this sort of fluffy fractal form, Moro-Martín says. She also sees similar structures in computer simulations of the way planets grow up in the dusty planet-forming disks astronomers see around other stars. As ice grains in the distant, frigid regions of those disks stick together, the particles develop into fractals.

‘Oumuamua could be one of those still-forming planets that got booted out of its star system before it finished forming, Moro-Martín proposes in a study published February 22 in the Astrophysical Journal Letters.

“If ‘Oumuamua were to have such an origin, it will be very interesting because it will be the first time that we have evidence for what this intermediate stage is,” Moro-Martín says. “We don’t know how the planet formation process proceeds. All we can see are the smallest particles, the dust particles, or the very largest, planets.”

But could a fluffy fractal survive the journey from another star’s planet-forming disk, all the way into the solar system and out again?

To accelerate as much as ‘Oumuamua did, the object must have a density of just 0.00001 grams per cubic centimeter, Moro-Martín estimates. In comparison, graphene aerogel — the lowest-density artificially produced material — is at least 10 times as dense. “It tells you [the object] must be very fragile,” Moro-Martín says.

“The idea that ‘Oumuamua is a fluffy fractal of ice, pushed by radiation pressure from sunlight, is an interesting scenario,” Loeb says. “But there are major challenges that it faces,” including how such a fragile object would survive, he says.

Planetary scientist Zdenek Sekanina of NASA’s Jet Propulsion Laboratory in Pasadena, Calif., agrees that a fluffy structure could account for ‘Oumuamua’s strange speedup. But he doesn’t think ‘Oumuamua was born with it. Instead, the object is a desiccated comet that lost most of its water and gases when it swooped close to the sun, he proposes in a paper posted January 30 at arXiv.org.

“It’s like a skeleton of the original body, with all the ice out,” Sekanina says.

Comets that fly close to the sun often do not survive. But some of these doomed objects have left observable fragments behind, like comet LINEAR. That comet came within 0.7 times the Earth’s distance to the sun in 2000 and left a cloud of mini comets behind, which were observed with the Hubble Space Telescope. ‘Oumuamua faced a harsher situation: It swooped closer to the sun, about 0.25 times Earth’s distance.

Like Loeb and Moro-Martín, Sekanina thinks solar radiation pressure is the best explanation for how ‘Oumuamua sped up. And a fluffy structure is the best way to accelerate with radiation pressure without invoking “little green men sending a sail,” he says. Although ‘Oumuamua is denser in Sekanina’s estimates than Moro-Martín’s, that’s still “just unbelievable,” he says. “It’s like a fairy castle type structure, or gossamer.”

If ‘Oumuamua were a fully solid, icy comet when it approached the solar system, and developed that gossamer structure only after flying close to the sun, that could explain how the object survived a trip through interstellar space.

When the Spitzer Space Telescope checked ‘Oumuamua for signs of a cometlike tail, the instrument saw none, meaning only minuscule amounts of carbon monoxide and carbon dioxide gas would have been expelled, if any. And if you assume ‘Oumuamua’s composition is similar to comets in the solar system, Spitzer’s data suggest that the object must not have been spewing out much water, either.

But if ‘Oumuamua is a strange sort of comet, it could spew water vapor or other noncarbonated gases that Spitzer didn’t detect, which could explain how the object sped up. “‘Oumuamua is made of still water, not Perrier,” quips astronomer Gregory Laughlin of Yale University.

Laughlin and colleagues are working on a study that suggests that ‘Oumuamua releases a nozzlelike jet of gas whose source migrates across the object’s surface, following the warmth of the sun. That migration would let ‘Oumuamua tumble through space without spinning so fast that it breaks apart. Other comets, including one visited by the Rosetta spacecraft (SN: 11/11/17, p. 32), exhibit this sort of sun-tracking jet.

“The weirdness is that [‘Oumuamua] would have to be made of pretty pure ice” to explain such outgassing, Laughlin says. It’s not clear if a comet, even a weird one, could be made of pure ice. So it’s possible that it ‘Oumuamua could be an ice shard of a larger body, such as if an icy planet came too close to a larger neighbor and was ripped apart, he says.

Unfortunately, there’s no way to check how ‘Oumuamua is structured now — it’s too far away to make any more observations. The ultimate test will come when — and astronomers think it’s a matter of when, not if — another interstellar visitor comes calling.

“If [‘Oumuamua] was representative of a population, there will be opportunities to get an up-close look at them,” Laughlin says.