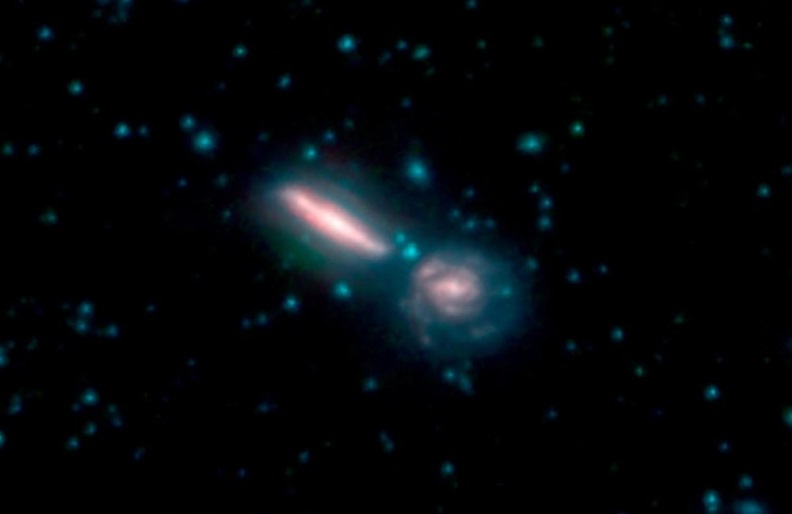 Images taken by NASA’s Spitzer Space Telescope are providing insight into the phenomenon of “killer” galaxies that, when they merge, shut down star formation within the new united galaxies. The collision and mixing of a pair of galaxies under the right (or wrong) conditions can disrupt the processes that allow stars to form, effectively dooming the merged galaxy.

As Douglas Adams said, space is big – really big. There are trillions of galaxies spread throughout this vastness that form into clusters and some of them will interact with one another. Such interactions can be as benign as two galaxies passing or orbiting one another drawing out gases and distorting their rotating arms. Others can be high-speed collisions where the two galaxies pass through one another, or a larger one devours the smaller one.

And then there are galactic mergers where two galaxies of similar sizes collide with one another so slowly that they don’t have enough momentum to separate again and form a new galaxy. These only happen in a small percentage of interactions, but NASA says that some of these can generate conditions that effectively shut down star formation, causing the new galaxy to die young as the older stars reach the end of their lives.

The Spitzer images are part of a decade-long study called the Great Observatories All-sky LIRG Survey (GOALS), which focused on looking at how galaxies merge. The survey of over 200 objects in our intergalactic neighborhood provided a number of examples of killer mergers. Since Spitzer operates in the infrared band of the spectrum, the images are rendered in false colors between 3.6 and 8.0 microns to bring out light emissions from both stars and interstellar dust.

According to NASA, when two galaxies merge, one of the perils is that the merged galaxy may end up with a supermassive black hole at the center that sucks most of the available gas and dust, preventing new stars from emerging. Another possibility is that the merger will generate shock waves from the giant black hole that will blow away gas and dust, again shutting down star formation.

This sounds very simple, but the space agency emphasizes that this is, in fact, a complex relationship that involves new bursts of star formation, the mechanics of black holes, and other processes. To better understand this, GOALS is working with both the Spitzer and the W.M. Keck Observatory in Hawaii to seek out shock waves in merging galaxies, which have been surprisingly lacking in one example under a detailed survey, indicating that more data is needed for a better understanding.