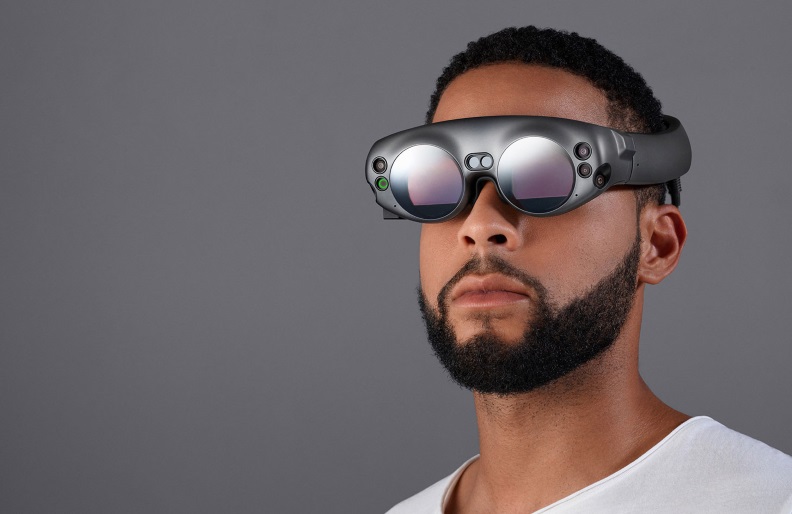 Oculus, the company responsible for kickstarting the $2 billion virtual reality marketplace, knows virtual reality is not the future. As its engineers pour millions of Facebook’s dollars into the second generation of VR headsets, the company’s head of research, Michael Abrash, is preparing for a world where augmented reality dominates our everyday lives.”No matter how good VR gets, few people would be comfortable socializing in person with someone whose eyes they can’t see, and social acceptability is an absolute requirement for anything we wear in public,” Abrash said at Facebook’s F8 conference in April.

Though VR has the ability to connect people across continents and express powerful, emotional experiences in more-immersive ways than ever before, those bulky headsets simply aren’t appealing. VR hardware — dense visors with unwieldy straps and thick lenses — physically separate the user from the real world. Wearing a VR headset is akin to voluntarily strapping on a blindfold; it feels vulnerable. Plus, it looks weird.

The way a product makes people feel is difficult to quantify and even harder to design around, but it’s incredibly important to the success of any new tool. Abrash knows this. Oculus knows this. Facebook, Oculus’ parent company, knows this too, as do other major tech manufacturers like Google, Apple and HTC. And it’s one reason AR is the future rather than VR.

“We all know what we really want: AR glasses,” Abrash said in April. “They aren’t here yet, but when they arrive, they’re going to be one of the great transformational technologies of the next 50 years.”

However, just because VR is DOA doesn’t mean the industry will disappear anytime soon. In fact, major VR manufacturers are already preparing their users for the day VR is indistinguishable from AR — when those thick plastic headsets will transform into stylish, clear lenses projecting virtual worlds atop the physical plane, with the option to block out reality completely in favor of an immersive experience.

VR proved itself in 2017. The industry is expected to generate $2.2 billion this year, and there are three mainstream headsets on the market, a handful of popular devices for mobile VR and dozens of cheap knock-offs lining the shelves of Target and Walmart. Sony is leading the pack when it comes to tethered headsets: It’s sold 2 million PlayStation VR devices since their debut last fall, handily outstripping estimated sales of the HTC Vive and Oculus Rift — combined.

However, these numbers can’t compete with sales of mobile VR headsets like Google Cardboard, Daydream View or Samsung Gear VR. Google has shipped more than 10 million Cardboard headsets since 2014, and it’s estimated to have sold between 2 million and 3.5 million Daydream devices in 2017 alone. Meanwhile, Samsung is on track to sell as many as 6.7 million Gear VR headsets this year, according to analysts.

One reason mobile VR has exploded, while the Vive and Rift have seen sluggish sales, is accessibility. The Vive and Rift are not only priced higher than other headsets — Daydream View is $100 while the Rift is $400, for example — but also require high-end PCs, easily raising the cost of entry above $1,000.

That’s all about to change. The second generation of VR is on its way, and there are a lot fewer cables involved. Standalone VR is the next step, removing the PC (or the smartphone, for that matter) from the equation entirely.

Oculus has two standalone headsets in the pipeline: Go and Project Santa Cruz. Go is a wireless headset for the masses, priced at $200 and slated to land in early 2018. Project Santa Cruz is an impressive standalone VR headset featuring full positional tracking and six degrees of freedom, allowing the wearer to move around more naturally in digital spaces. Santa Cruz is due to ship to developers by the end of next year.

HTC and Sony are diving into the second wave too. HTC has the Vive Focus, a 6DoF, untethered headset that debuted in China this December for about $600. Meanwhile, Sony is quietly improving the PSVR. It launched an updated, HDR-capable version of the headset in Japan in October, though it’s still tethered. And Google is partnering with HTC Vive and Lenovo on a pair of standalone headsets.

Despite the relative lack of wires in the coming generation of VR headsets, the hardware itself is still bulky and strappy, and it blocks the user’s eyes — an unmarketable sin, according to Abrash. VR lacks elegance, and this factor likely keeps out another major technology manufacturer, Apple, whose $900-billion brand is dependent on producing meticulously designed products. Apple hasn’t demonstrated an interest in building VR hardware, though it’s rumored to be working on an AR headset due to be announced in 2019.

“My own view is that augmented reality is the larger of the two, probably by far, because this gives the capability for both of us to sit and be very present talking to each other but also have other things visually for both of us to see,” Apple CEO Tim Cook said in late 2016.

Microsoft doesn’t have the same excuse as Apple. Historically, it isn’t afraid to push experimental products onto an unsuspecting public. However, the company has a small footprint in the VR marketplace so far, offering a handful of relatively cheap Windows-powered headsets built by third-party companies. This tentative approach seems to be on purpose: Microsoft is preparing for a reality where VR represents just a sliver of the experiences offered by the lenses perched on our noses. The company is already playing around in the space between VR and AR with its mixed reality platforms, laying the foundation for these two ecosystems to coexist. In the near future, the company seems much more interested in AR, as demonstrated by its focus on HoloLens.

Since its launch in 2015, Microsoft’s $3,000 HoloLens headset has found a market in the business world, now available in 39 countries and used by companies including Ford and Thyssenkrupp. It’s an AR headset and a tool for gaming, though few people have thrown down that kind of cash simply to play Minecraft on their tabletop. The next version of HoloLens isn’t due out until 2019, though when it lands, it’ll reportedly have a beefy AI system that should improve the headset’s voice- and object-recognition capabilities.

And then there’s Magic Leap. The company has been building AR hardware for years, with much of its work shrouded in secrecy and dogged by worrisome rumors — but that’s all about to change. Magic Leap plans to ship its first consumer-grade mixed reality headset in 2018, though there’s no word on price just yet. The final hardware design is sleeker than anything we’ve seen in the first generation of VR or AR headsets, though this sucker would definitely stand out (in a not-so-great way) in public.

If the AR hardware market is sluggish, the software side of things has exploded over the past few years. Massively popular apps like Pokemon Go have established AR in the wider marketplace, showing mainstream consumers what’s possible when we mix the digital world with reality. Apple is going HAM on AR software with ARKit, which allows developers to play around in these mixed spaces, and Google is right behind with its ARCore ecosystem. Microsoft has the Mixed Reality Capture Studios and Mixed Reality Academy at its Reactor in San Francisco, inviting creatives to come in and experiment with AR, VR and everything in between.

A lot of this innovation is happening on mobile devices. Both Apple and Google have emphasized AR in their most recent smartphone lines, showcasing shopping, entertainment, translation and gaming apps live onstage during major press conferences. Facebook has taken huge steps to integrate AR into its platforms as well, alongside its moves in social VR with Spaces.

“I am confident that now we are going to push this augmented reality platform forward,” Facebook founder Mark Zuckerberg said in April. “Long term, all of the work that we’re doing here is going to go into the glasses that we all want. It’s all the same technology.”

VR and AR are following different paths to the same conclusion: a combination of VR and AR that makes humans more intelligent, capable and informed. That looks a lot like Microsoft’s mixed reality dream, if we’re being fair.

The future of AR — or mixed reality as a whole — is tied to the future of artificial intelligence. As the AI industry advances, developers will be able to pack more power into smaller and more-streamlined headsets, until it’s impossible to spot the differences between analog and AR spectacles. Hell, even Facebook (that is, Oculus) is getting in on the AR hardware game, promising to eventually launch a pair of unassuming spectacles capable of projecting new worlds onto our own in everyday situations.

“Twenty or 30 years from now, I predict that instead of carrying stylish smartphones everywhere, we’ll wear stylish glasses,” Abrash said. “Those glasses will offer VR, AR and everything in between, and we’ll wear them all day and use them in almost every aspect of our lives. The distinction between AR and VR will vanish.”

The companies building VR are also dabbling in AR, while those focused on AR are learning from the trials of the burgeoning VR industry. The future, however, is clear — literally. Eye-blocking headsets are not the end game for any manufacturer, not even the OG VR evangelists at Oculus.

VR isn’t doomed after all. It’s just going to look a lot like AR.