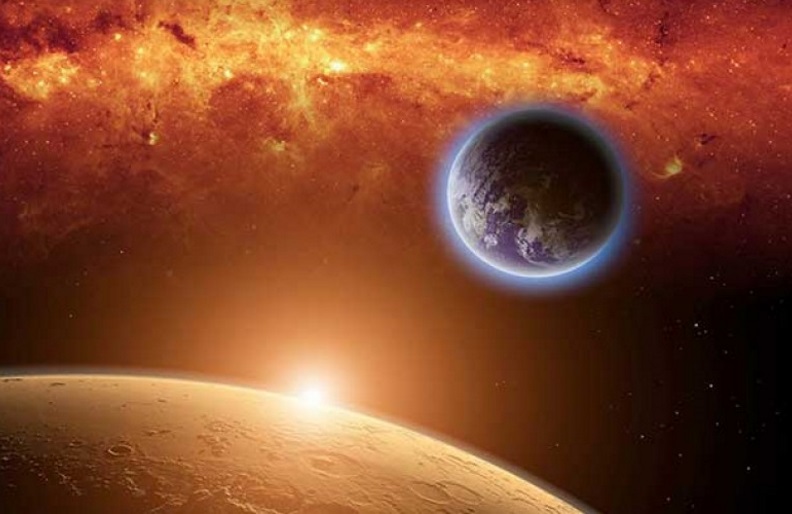 Our solar system is in constant motion, with all eight planets — and dwarf planet Pluto — orbiting the sun. Most of those planets are visible from Earth, even to the naked eye. If you track them in the sky night after night, you’ll notice that their position changes slightly; as they orbit the sun, they appear to move from west to east against a fixed backdrop of distant stars.

However, sometimes, some of them seem to reverse direction and travel backward — from east to west — for weeks at a time, before resuming their usual course. This movement is called “retrograde motion.” But what does that mean, and what exactly is happening here?

Retrograde motion is actually an illusion. Earth circles the sun faster than planets that are farther away from the sun. And when Earth passes one of those distant planets in its journey around the sun, to those of us standing on terra firma, it seems like that far-off object reverses direction — but that’s just a trick of your brain. The planet is moving in the same direction it always has, but our perspective is different.

Think of it this way — you’re in a car on the highway, and you pass another car in the next lane. As you go by, it looks like that other car is moving backward. Obviously, the driver hasn’t suddenly started driving in reverse. But relative to your car and your momentum, it looks like the other car is actively moving in the opposite direction.

Now, let’s apply that to Mars. About every two years, Mars appears to change course in the sky and spend a couple of months traveling backward. In 2018, retrograde motion began on June 28, with Mars appearing to move from west to east in our sky until Aug. 28, and then resuming its normal path.

But during those two months, it’s not Mars that’s doing something different — it’s Earth.

It takes Earth 365 days to orbit the sun. Mars needs 687 Earth days to make a complete circuit. We’re both in motion, but Mars has farther to go to make it all the way around. Every 26 months, Earth catches up to Mars and moves past it. As our orbital path carries us past the Red Planet, we experience the illusion that Mars is pulling away from us, rather than the reality — that Earth is moving away from Mars.

After a couple of months of this, our perception of how our planets are moving hits the reset button, and Mars appears to resume its forward movement.

And if that isn’t weird enough, because Earth and Mars have different tilts to their orbital paths, the shape of the path tracking Mars’ backward motion can change between retrograde events. If you observe and mark the position of Mars night after night during retrograde, you’ll see a shape emerge — sometimes it’s a closed loop and sometimes it’s more of a zigzag — all depending on where the planets are on their tilted axes.

If Earth and Mars orbited at the same pace and remained in fixed positions relative to each other throughout their orbits, Mars would always look like it was moving in the same, east-to-west direction. Since they don’t, every couple of years, Mars temporarily gets left behind.

Retrograde motion was even visible to early astronomers, who were thoroughly confused when they saw this and struggled to explain it. But it was impossible for them to come up with a solution that also fit with the popular idea that Earth was the center of the solar system. Not until the 16th century — when the Polish astronomer Copernicus placed the sun at the center of the solar system — did all that retrograde motion suddenly make sense.