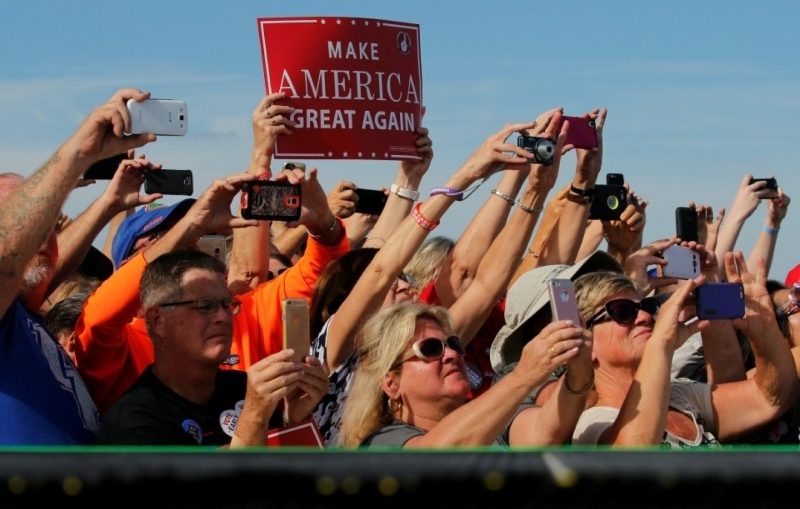 Since the conventions, a key question in the presidential race has been whether Donald Trump could hold together a substantial Republican voting bloc — and what that bloc might look like. When his poll numbers tanked shortly after the Democratic National Convention (and Trump’s fight with the Gold Star Khan family), it was largely a function of Republicans’ bailing. In more recent national polls, which have shown the margin between Trump and Hillary Clinton all over the map, we could look at how much support Trump got from Republicans as a key factor driving the results.

The Post’s tracking poll, conducted with ABC News, has shown a much closer national race over the past few days, thanks in large part to Republican enthusiasm. “Greater Republican unity has buoyed Trump’s rising support,” our pollsters wrote of Sunday’s survey, which showed Trump behind by a single point. On Thursday, Trump trailed by six points. Because Republicans vote more consistently than Democrats (consistent voting correlates to age and income), more support from Republicans can quickly mean a more Trump-friendly pool of likely voters.

Although Republicans are embracing Trump, it’s not because the same old Republicans are finally settling on Trump. As from the beginning, Trump’s base looks quite different from 2012 Republican presidential nominee Mitt Romney’s.

We can compare the voting history of various groups with numbers from recent Post-ABC tracking polls to make that point obvious.

Men usually vote Republican, and Trump leads with them. He has improved five points with men since that Thursday tracking poll, and he is now doing two points better than Romney did in 2012. Although Trump is still losing women, he is actually doing three points better than Romney did with the group, after an eight-point shift since the poll on Thursday. Margins of error apply here, of course, so that shift may appear bigger than it actually was.

But other numbers show where that shift happened. Among whites, Trump is five points behind where Romney was at this point, because Trump is doing worse with college-educated white voters. Compared with Romney, Trump is 18 points ahead with non-college-educated white men and seven points ahead with non-college educated white women — but Trump is performing substantially worse among those with college degrees. Since Thursday, though, those numbers have ticked up a bit. Trump has improved three points among white women with college degrees, and seven among white men with degrees. Among those voters, the race is now basically tied — though Trump is still doing worse with the group than any Republican in decades.

College-educated white men and women tend to be more bipartisan than those without degrees, but, overall, college-educated whites have backed the Republican consistently in presidential balloting. Trump is down 12 points with that group — but was down by 17 on Thursday. (Subsets of subsets of voters have higher margins of error, so keep that in mind.) Even among white voters who are more skeptical of his candidacy, Trump has been doing better.

The white Republican vote — which could also be simply described as “the Republican vote,” since most Republicans are white — is not the only factor. Because he was down six points in our tracking poll, Trump ha made other gains, including among independents.

At his best in polling, Trump has been tied with Clinton, as he is now. In the case of a tie, things such as voter enthusiasm play a big role: the extent to which voters are motivated to go to the polls to cast a ballot can make a huge difference. This can be hard to track; it depends a lot on how good a candidate’s campaign efforts are on the ground, for example.

But there was room for Trump’s support to grow within his own party a week ago. It did. That base continues to be more heavily made up of whites without college degrees than was Mitt Romney’s four years ago, but a vote is a vote.