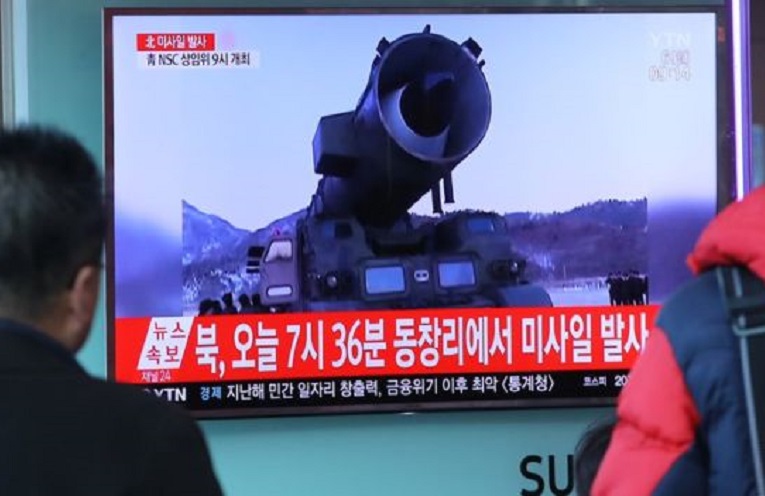 US President Donald Trump has declared he would be willing to go it alone to restrain North Korea’s nuclear weapons program should China fail to change the situation, saying if Beijing won’t help solve it, then “we will” alone.

“China will either decide to help us with North Korea or they won’t,” Trump said in an interview published Sunday in the Financial Times. “If they do, that will be very good for China, and if they don’t, it won’t be good for anyone.”
Trump’s administration has repeatedly emphasized its high concern over the North Korean nuclear threat. Secretary of State Rex Tillerson visited China last month to press North Korea’s neighbor for help in mitigating that threat, and Trump is scheduled to host Chinese President Xi Jinping this week in the US, where he intends to bring the issue up.
China didn’t respond to Trump’s comments to the FT Monday, but issued a statement saying that Tillerson had phoned the country’s top diplomat, State Councilor Yang Jiechi, about Xi’s visit.
According to the statement, Yang said the meeting was of “utmost importance in China-US relations” and was important for “promoting peace, stability and prosperity… for the whole world.”
On the campaign trail and since taking office, Trump has argued China is responsible for the continued nuclear proliferation in North Korea. He said in his Financial Times interview that he planned to talk with Xi about that situation and use trade as “the incentive” to talk China into fixing it.
Trump has repeatedly said he would take aggressive action against China to reduce the US trade deficit with the country. But if the talks with Xi don’t produce Trump’s desired result of getting Beijing to solve the North Korean nuclear problem, Trump said the US would take action.
“If China is not going to solve North Korea, we will,” Trump told the Financial Times.
Asked to clarify if he believed the US could solve the problem without China, Trump said: “totally.”
In an interview with ABC News Sunday, US Ambassador to the United Nations Nikki Haley said the US should “no longer take the excuses from China that ‘they’re concerned.'”
“They need to show us how concerned they are… the only country that can stop North Korea is China, and they know that,” she said.
The US maintains that China hasn’t done enough to apply financial pressure given that Beijing is North Korea’s only real ally and accounts for 70% of the country’s trade.
China has repeatedly said that its influence over the North Korea has been overstated, and the US and South Korea should stop antagonizing North Korea with its annual military drills.
Thousands of US and South Korea troops are currently engaged in the Foal Eagle joint annual drills that finish on April 30.
“On one hand, North Korea has violated UN Security Council resolutions banning its ballistic missile launches; on the other hand, South Korea, the US — and now Japan — insist on conducting super-large-scale military drills. It’s a vicious cycle that could spiral out of control — and such a scenario would benefit no one,” Chinese Foreign Ministry spokeswoman Hua Chunying said during a press briefing on March 14.
Beijing has proposed a “double halt” approach that would see North Korea suspend its nuclear program, while the US and South Korea would call off joint military drills.
The US has already dismissed the plan. In a briefing on March 9, Mark Toner, the acting State Department spokesman, said: “There’s no equivalence between North Korea’s illegal missile and nuclear activities and what is our lawful, longstanding joint security exercises with our allies in the region.”
North Korean state media has slammed the drills, accusing the countries in a report dated March 12 of “becoming more reckless as the days go by.”
On Monday, the US, South Korea and Japan announced a new round of exercises from April 3-5. South Korean Defense Ministry Spokesman Moon Sang-gyun said drills were planned “to show a strong resolve to counter North Korea’s nuclear and missile threats as North Korea has been steadily improving its submarine-launched ballistic missiles (SLBM) capabilities.”
North Korea has test-fired a number of missiles this year and in recent weeks has tested engines which analysts said could be used to power long-range weapons.
Last September, Pyongyang claimed to have tested a nuclear warhead, with South Korea’s weather service estimating the explosion to have about 10 kilotons of power, or about two-thirds the power of the bomb the US dropped on Hiroshima in World War II.
Speaking in South Korea last month, Tillerson warned that the US would leave the option of military action on the table with regard to North Korea.
Source link