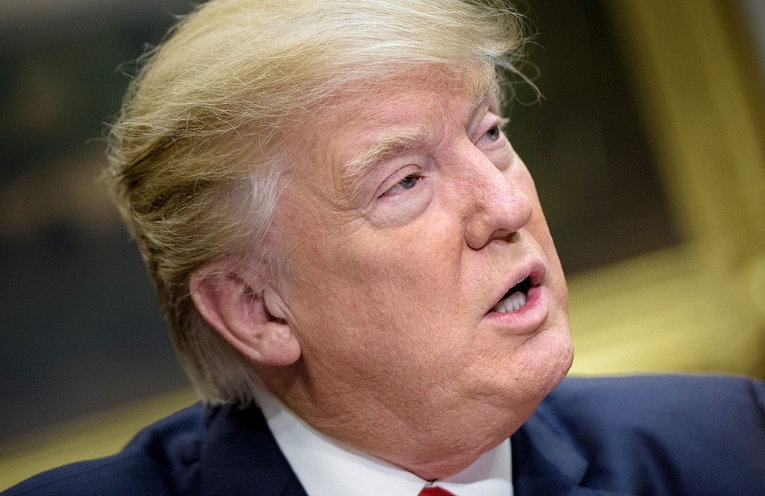 President Donald Trump said that Thursday’s visit to Mexico will be a “tough trip” for Secretary of State Rex Tillerson.

Tillerson is scheduled to meet with Mexican officials later Thursday, including Mexican Foreign Secretary Luis Videgaray, with whom Tillerson is expected to deliver a joint statement.

But Tillerson’s trip to Mexico City comes as tensions between both nations have been further inflamed by newly released guidance empowering U.S. officials to detain and deport immigrants. Among other guidelines, this week’s memos seek to deport all undocumented immigrants who enter through Mexico back to Mexico, regardless of their country of origin.

The Homeland Security Department on Tuesday released sweeping guidelines on deportations and the president’s long-promised border wall, a potentially ill-timed decision adding to the new administration’s diplomatic flare-ups with its southern neighbor.

DHS Secretary John Kelly will join Tillerson for a working lunch with Videgaray and other officials before an afternoon meeting with Mexican President Enrique Peña Nieto, who last month canceled a White House visit after Trump challenged him to accept that Mexico will fund the border wall.

Trump hailed his “great team” as a roster of “all-stars” that he said his administration has “really been given credit for.”

“But he’s over there with General Kelly, who’s been unbelievable at the border,” Trump said of Tillerson, adding that “for the first time,” the U.S. is getting gang members and drug members out of the country.

“We’re getting really bad dudes out of this country — and at a rate that nobody’s ever seen before,” Trump continued. “And they’re the bad ones. And it’s a military operation, because what has been allowed to come into our country — when you see gang violence that you’ve read about like never before and all of the things, much of that is people that are here illegally. And they’re rough and tough, but they’re not as tough like our people. So we’re getting them out.”

In the lead-up to the meetings, the White House and Mexico have sent mixed messages about their relationship. White House press secretary Sean Spicer said Wednesday it was “phenomenal right now” and highlighted what he called “an unbelievable and robust dialogue between our two nations.”

“We have a very healthy and robust relationship with the Mexican government and Mexican officials, and I think they would echo that same sentiment,” Spicer told reporters Wednesday.

On Wednesday, at least, they didn’t. Roberto Campa, who leads the Mexican Interior Ministry’s human rights department, characterized the Trump administration’s deportation guidance to send non-Mexicans to Mexico as “hostile” and “unacceptable.”

Similarly, Videgray expressed frustration at the Trump administration’s policies. “I want to say clearly and emphatically that the government of Mexico and the Mexican people do not have to accept provisions that one government unilaterally wants to impose on the other,” he told reporters Wednesday, according to a Reuters report. “We also have control of our borders and we will exercise it fully.”