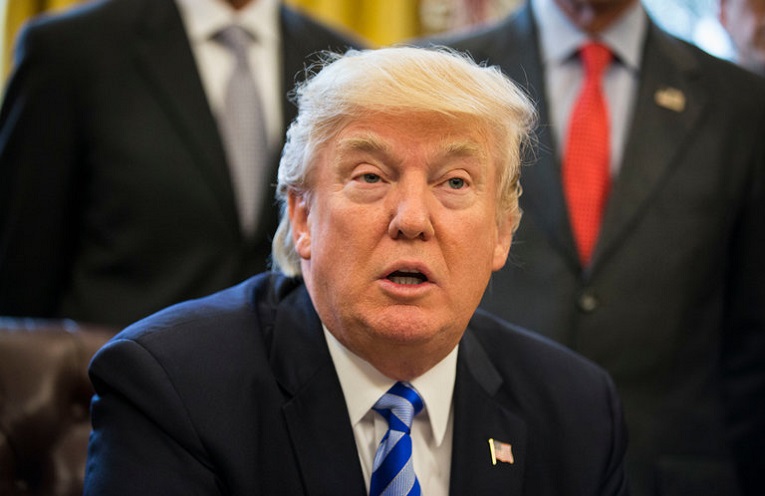 WASHINGTON — President Trump said on Friday that Michael T. Flynn, the national security adviser who resigned last month over his contacts with Russian officials, should ask for immunity from prosecution in the congressional investigation into the presidential campaign’s ties to Moscow. Mr. Trump called the inquiry a “witch hunt” by the news media and Democrats.

The president made the remark on Twitter the morning after it was revealed that Mr. Flynn was seeking an immunity deal as part of an offer to testify in the investigations by the House and Senate Intelligence Committees into Russian meddling. Those inquiries are looking into the presidential election and potential collusion between Mr. Trump’s campaign staff members and the Russians.

“Mike Flynn should ask for immunity in that this is a witch hunt (excuse for big election loss), by media & Dems, of historic proportion!” Mr. Trump wrote.

Mike Flynn should ask for immunity in that this is a witch hunt (excuse for big election loss), by media & Dems, of historic proportion!

The president has been eager to dismiss as “fake news” all allegations that members of his campaign colluded with the Russians, and the post appeared to be an effort to discredit the congressional inquiries that are examining those claims. It also appeared to be aimed at defusing any speculation that Mr. Flynn might be seeking immunity because he has incriminating information to share about Mr. Trump or his associates.

Representative Adam B. Schiff of California, the ranking Democrat on the Intelligence Committee, quickly fired back with his own Twitter posts directed at Mr. Trump, saying that his committee would soon uncover the reasons Mr. Flynn wanted immunity.

“The question for you, Mr. President, is why you waited so long to act after you learned Flynn (through your VP) had misled the country?” Mr. Schiff wrote.

The question for you, Mr. President, is why you waited so long to act after you learned Flynn (through your VP) had misled the country?

He was referring to the fact that Sally Q. Yates, then the acting attorney general, had informed the White House in January that Mr. Flynn had apparently misrepresented the nature of his communications with Sergey I. Kislyak, the Russian ambassador, saying they had not spoken about United States sanctions against Moscow — when they had.

Mr. Flynn did not resign until three weeks later, ostensibly because he had lied to Vice President Mike Pence about his talks with Mr. Kislyak, and Mr. Pence had gone on to repeat the mischaracterization publicly in a television interview.

The testy social media exchange on Friday was the latest turn in the increasingly bizarre saga surrounding the Trump White House and the investigation into connections with Russia. The credibility of the inquiry was thrown into question on Thursday after it emerged that a pair of White House officials helped provide Representative Devin Nunes of California, a Republican and chairman of the Intelligence Committee, with intelligence reports that showed Mr. Trump and his associates were incidentally swept up in foreign surveillance by American spy agencies.

Armed with the information, Mr. Nunes held a news conference and made a public show of going to the White House to hand-deliver information to Mr. Trump, an apparent effort to help the White House explain why the president had taken to Twitter early this month to accuse President Barack Obama of wiretapping his telephone. The chiefs of the F.B.I. and the National Security Agency have both testified that such surveillance never took place.

Mr. Nunes postponed a hearing that was to take place this week at which Ms. Yates was to testify.

It was not clear from Mr. Trump’s post on Friday whether he fully appreciated the potential impact on his administration if Mr. Flynn received immunity to participate fully in the investigation. But he has said previously that seeking protection from prosecution is a telltale sign of wrongdoing.

“If you’re not guilty of a crime, what do you need immunity for, right?” he said at a campaign rally in Orlando, Fla., in September. Mr. Trump was referring to Hillary Clinton aides who received immunity during an F.B.I. inquiry into her private email server.

His mention of a witch hunt echoed the language used by Mr. Flynn’s lawyer, Robert Kelner, in a statement Thursday evening about possible testimony by his client. “No reasonable person, who has the benefit of advice from counsel, would submit to questioning in such a highly politicized, witch-hunt environment without assurances against unfair prosecution,” Mr. Kelner wrote.

“General Flynn certainly has a story to tell, and he very much wants to tell it, should circumstances permit,” he added.

A congressional official said investigators were unwilling to broker a deal with Mr. Flynn until they were further along in their inquiries and they better understood what information Mr. Flynn might offer as part of a deal.

The F.B.I. is investigating whether any of Mr. Trump’s advisers colluded with the Russian government in its efforts to disrupt the 2016 presidential election. An immunity deal would make it extraordinarily difficult for the Justice Department to prosecute Mr. Flynn.