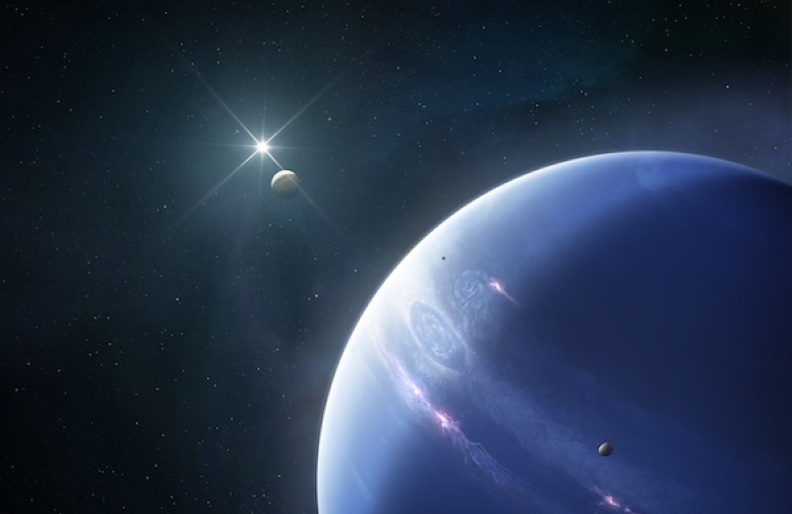 When Voyager 2 reached Neptune in 1989, just 12 years after setting off on its historic journey through the solar system, it discovered six new moons, took the first images of the planet’s rings and noted a particularly violent storm.

The storm was something of a surprise. In the southern hemisphere, there was a swirling, counter-clockwise wind of up to 1,500 mph (2,414 km/h) — the strongest ever recorded. Astronomers called it the Great Dark Spot, and while it had gone by the time the Hubble Space Telescope looked at the planet five years later, they were keen to learn why the winds were so extreme.

They were also perplexed by another issue: Voyager 2 revealed that Neptune is warmer than Uranus, despite being farther from the sun. As physicist Brian Cox discussed in his BBC documentary, The Planets: “The source of this extra heat remains a mystery.” But does that mean we have a double-puzzle on our hands, and can one mystery help to explain the other in some way?

Before we begin to address the two issues at hand, we must first look at what is actually meant by “warmer.” Since Neptune is a gas giant, we cannot test the global average temperature at ground level in the way that we could on the solid surface of Earth. Instead, with Neptune’s core likely to be small, temperature measurements must be taken at an altitude. Trouble is, which one?

The trouble with temperature

“We can only measure temperatures in the outermost layers,” said Michael Wong, a planetary scientist at the University of California, Berkeley, via email. In doing so we find that Neptune isn’t actually hotter than Uranus in real terms — they’re essentially at the same temperature. But since Neptune receives less solar illumination because it’s farther from the sun, this shouldn’t be the case.

What this similarity in temperature suggests is that Neptune is warmer in terms of how much heat it emits in comparison to the amount of heat it absorbs from the sun. “Voyager’s measurements show Neptune emits more than twice as much heat as it absorbs from the sun, while Uranus does not,” Anthony Del Genio of the NASA Goddard Institute for Space Studies (GISS) told All About Space. And this is where things become rather intriguing.

That’s because Neptune is not unusual in this case. “Jupiter and Saturn also emit almost twice as much heat as they absorb, but Uranus does not,” Del Genio said. “Uranus is the oddball.”

“The progression of temperature as you go farther away from the sun shows Jupiter to be the warmest of the gas giants, Saturn next, then Neptune. Uranus is the one that is out of place,” Del Genio said. “Yet that unusual result is associated with the fact that Uranus does not have a significant internal heat source.” Neptune is finding a way to warm itself up to the level of Uranus, while the latter is unable to generate any extra heat other than that gleaned from the sun.

But just what is an internal heat source? In simple terms it is heat leftover from the birth of the solar system when these planets were formed. The heat contracts out of the primitive solar nebula — an effect known as the Kelvin-Helmholtz contraction.

“The extra heat source on Neptune [and Jupiter and Saturn] is largely due to gravitational contraction,” said Joshua Tollefson, also of the University of California, Berkeley. “As the planet slowly gravitationally contracts, the material falling inward changes its potential energy into thermal energy, which is then released upwards out of the planet.”

Yet there is no clear reason why Uranus does not have much of an internal heat source — or any at all. “Something must have stunted this process on Uranus — perhaps due to a collision in its early history that knocked the planet on its side,” said Tollefson. “The question becomes, why does Neptune have an internal heat source but Uranus does not?”

Frozen planets that love to burp

There is a possibility that heat is not released from the interior at a steady rate but instead comes in “burps”. “We may just be seeing Uranus in a quiescent period, whereas Neptune has burped more recently,” said Tollefson. “The burps are convection, which may happen in discrete episodes separated by long time periods, but we may not know if it works this way for sure unless we see one of these convective episodes take place.”

It could also be an issue of Uranus being an old-timer and Neptune a younger pup. “How much heat a planet radiates depends mostly on how old it is and how quickly or slowly it releases that heat,” said Amy Simon, a NASA senior scientist for Planetary Atmosphere Research at the NASA Goddard Space Flight Center. “An older planet would be colder. How quickly they release depends on the interior structure and composition, cloud layers, convection and so on and that can be rather complicated.”

“On the gas giants there may be significant amounts of helium rain, changing the amount of heat released. For Uranus and Neptune it is possible that they are different ages or, more likely, the event that turned Uranus onto its side may have jumbled its interior structure and/or released heat faster,” said Simon.

So what of those winds? They are undeniably fierce, and this may have something to do with temperature.

“We’ve speculated for a long time that the coldness of Neptune and Uranus might lead to near-frictionless conditions and so allow for faster winds,” said Heidi Hammel, a planetary astronomer who has studied both planets extensively and who was part of the team imaging Neptune from Voyager 2.

It is difficult to quantify these effects because of the long timescales involved. “One year on Neptune is 165 Earth years so we have not had a chance to study the planet with modern tools for very much of its seasonal cycle,” said Hammel. “You need a lot of patience — and trust in past and future generations of planetary scientists — to study the atmospheres of outer planets.”

“I guess the theory was supposed to be the greater amount of solar energy, the more wind energy, but on Earth we’ve known for a long time that the amount of energy received by the sun and converted into kinetic energy in the atmosphere — that is, wind — is a tiny fraction,” said Del Genio.

Earth is a very inefficient heat engine, and it doesn’t give you much bang for the buck. One reason is that it has a solid surface that dissipates wind energy by friction, whereas the gas giants do not, so that is one reason why all the giant planets have much stronger winds than Earth does.

Why are Neptune’s winds so strong?

“Winds are probably generated deeper than sunlight can penetrate, so a combination of internal heat and rotation likely produces them,” said Simon, raising the issue of why Uranus and Neptune’s winds don’t match, given they have similar rotation rates. “It tells us something is different between them: partially internal heat or something else,” said Simon.

Uranus’ winds can blow up to 560 mph and Neptune’s 1,500 mph. “They’re both extremely fast and peak at speeds faster than Jupiter,” said Tollefson. NASA says Jupiter’s Great Red Spot can blow at 384 mph. But he too says internal heat alone cannot explain the speeds, given Uranus does not generate extra heat.

The interior structure of the planets — their masses, core sizes, and radial density profiles — is extremely important for understanding the winds as we see them. How the winds form and how deep they go are questions currently being answered for Jupiter and Saturn thanks to NASA’s Juno and Cassini spacecraft. This is due to the extremely good gravitational data they’ve obtained, which means good models for the interior structure can be made.

Computer simulations suggest that the winds of the ice giants are confined to shallow depths in the upper layers of their atmospheres. This may suggest that the fast winds we see on Uranus and Neptune are at least partly due to the latent heat release of condensation for materials like water.

Del Genio also questions the available data. He explains that when we measure winds on Neptune, we look at one specific altitude. “The winds at other altitudes may be slower or faster,” said Del Genio. “We don’t know because we have never dropped probes into the atmospheres of most of the outer planets.”

What Neptune and Uranus show is that planets which form in similar conditions can provide two extremes. Simon says this helps us constrain models of how these planets form and give clues about the solar system‘s overall formation. “They should also help us better understand deeper circulation, given they are so far from the sun.”