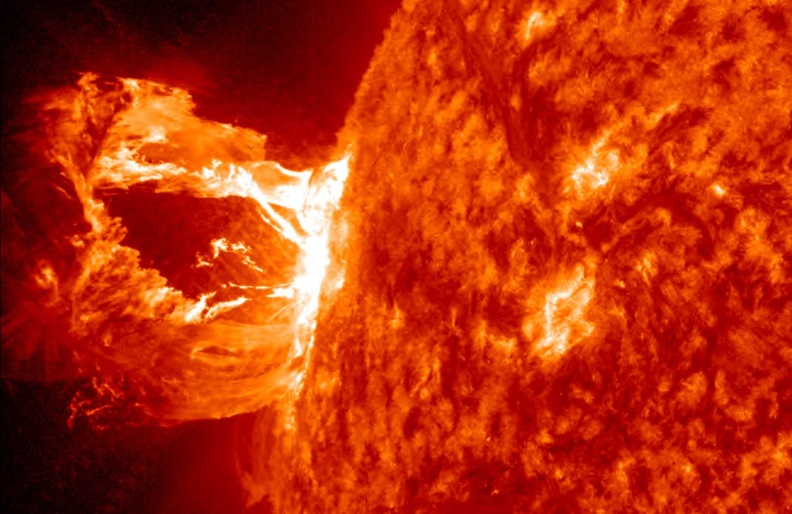 A new study by Queen’s University Belfast and Aberystwyth University indicates that the Sun’s magnetic field is 10 times more powerful than previously thought. By analyzing a solar flare on September 10, 2017 using the Swedish one-meter Solar Telescope at Roque de los Muchachos Observatory, La Palma in the Canary Islands, Dr David Kuridze, Research Fellow at Aberystwyth University, was able to determine that the magnetic field is an order of magnitude greater than earlier measurements have suggested.

The Sun’s magnetic field is of more than academic interest. Though the Sun is so far away that its light takes eight minutes to reach us, its magnetic field has tremendous impact on our world.

The solar magnetic field reaches out and defines the limits of the solar system. It shields us from galactic cosmic rays. It confines and directs the massive solar flares that burst from the Sun’s interior and expand to over 20,000 km (12,500 mi) above its surface.

The solar magnetic field also has more direct effects on us. It can impact terrestrial weather and climate. Its effects form the auroras in the polar regions and it can affect magnetic compasses, GPS, and radio communications. A really big solar magnetic storm might even lead to an electromagnetic pulse event that could knock out the power grid of an entire continent.

According to the new study, the problem is that the Sun’s magnetic field isn’t so easy to measure. Instruments are limited and the Earth’s atmosphere tends to dampen the solar lines of force, making them appear weaker than they really are. But through good fortune and favourable conditions, the researchers were able to gain a clearer picture by turning their telescope to an area of the Sun’s surface they knew to be particularly volatile.

Kuridze says that by observing the Sun over a 10-day period, his team was lucky enough to catch a large flare and by analyzing its structure inside the Sun’s corona, he calculated that the Sun’s magnetic field is 10 times stronger than previously believed. This may sound daunting, but that makes it only about as strong as a fridge magnet, or 100 times less than that of an MRI scanner.

“Everything that happens in the Sun’s outer atmosphere is dominated by the magnetic field, but we have very few measurements of its strength and spatial characteristics,” says Kuridze. “These are critical parameters, the most important for the physics of the solar corona. It is a little like trying to understand the Earth’s climate without being able to measure its temperature at various geographical locations.

“This is the first time we have been able to measure accurately the magnetic field of the coronal loops, the building blocks of the Sun’s magnetic corona, with such a level of accuracy.”