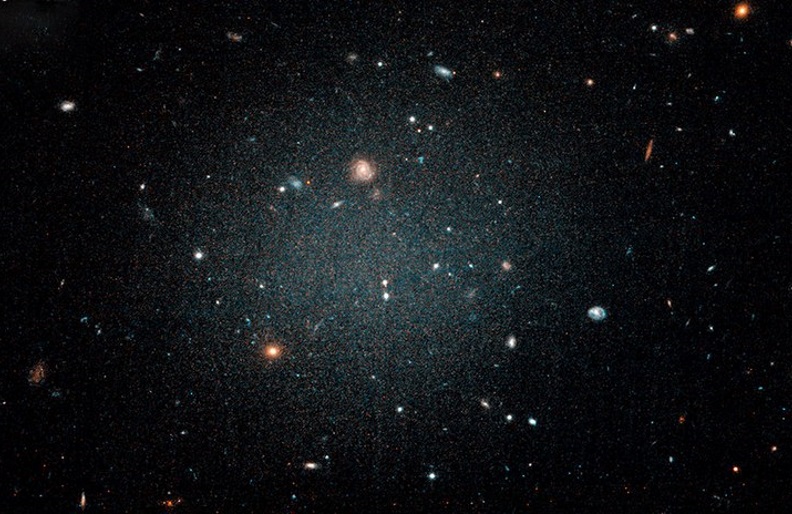 When it comes to the nature of dark matter, astronomers are still largely, well, in the dark. The existence of this mysterious substance was hypothesized more than 40 years ago to explain discrepancies between the calculations of how galaxies ought to behave, based on their mass, and what was actually observed. In short, it seemed like mass was missing. So Vera Rubin, the astronomer who first discovered this discrepancy, conjured an invisible substance that is far more abundant than “normal” matter and acts as the scaffolding for the large-scale structure of the universe. Today we call it dark matter.

Yet decades of hunting for the elusive dark matter particle still have not yielded direct evidence of its existence. Most cosmologists still believe that dark matter must exist, but some have splintered off to propose other explanations that explain away dark matter by modifying our understanding of gravity.

But two findings are now casting doubt on the modified gravity explanation. In March, a team of astronomers led by Yale professor Pieter van Dokkum and his graduate student Shany Danieli published two papers, one confirming the existence of a galaxy that appears to have almost no dark matter and the other announcing the discovery of a second galaxy of this type. The irony, the researchers say, is that the seeming lack of dark matter in these galaxies is strong evidence that it exists.

The reason they believe these galaxies have no dark matter is that their dynamics can be predicted using our traditional theories of gravity. The discrepancy of the “missing mass” that’s seen in most galaxies isn’t present here, meaning there’s no need for dark matter to explain their behavior. And it means that the modified version of gravity proposed by some cosmologists doesn’t predict these galaxies’ movements as cleanly as good old Newtonian physics.

The discovery of these dark-matter-free galaxies traces back to 2014, when van Dokkum and his colleagues finished building Dragonfly, a new kind of telescope, made of off-the-shelf telephoto camera lenses, that specializes in observing extremely faint celestial objects. Only a year after its first light, Dragonfly discovered a new galaxy characterized by an extreme lack of stars relative to its size. Known as an ultra-diffuse galaxy, this ghostly celestial object had roughly the same mass as our Milky Way, but only one hundredth of one percent of that mass could be attributed to “normal” matter like stars. In other words, van Dokkum and his colleagues had discovered a galaxy made of 99.99 percent dark matter.

While this galaxy was unique, its existence isn’t entirely surprising. Most cosmologists think that dense collections of dark matter act as a sort of seed for the formation of large celestial objects like galaxies. The general idea, says Anže Slosar, an astrophysicist at Brookhaven National Laboratory, is that once a collection of dark matter reaches a critical density, it collapses under its own gravity and forms a so-called “dark matter halo.” This halo, in turn, gravitationally attracts hydrogen gas to its center, where it begins to form stars and, eventually, galaxies. The mass of a dark matter halo varies from galaxy to galaxy, but it seemed like every galaxy must have at least some dark matter to keep its form. Indeed, this assumption was precisely what made Dragonfly’s next discovery so surprising.

In 2016, van Dokkum and his colleagues at Yale discovered NGC 1052-DF2, an ultra-diffuse galaxy that appeared to contain little to no dark matter at all. Last year, when the Yale astronomers published their results in the journal Nature, their peers in the cosmological community were incredulous. This was the first galaxy ever discovered that appeared to lack any dark matter, and as Carl Sagan rightly observed, “extraordinary claims require extraordinary evidence”—which is what many cosmologists thought the Yale team was missing.

University of Pennsylvania astrophysicist Robyn Sanderson says the skepticism about DF2 sprang mostly from the limited amount of data used to draw the conclusion. In this case, the Yale team was using data from just 10 star clusters observed over a period of two nights. This meant it was possible they were overlooking key details of the star clusters’ motion, which would distort their estimations of the galaxy’s mass—and undermine their claim that it lacked dark matter.

The Yale researchers recognized this possible source of error themselves when they published their paper on DF2. The only way to resolve this conundrum was to make more detailed measurements or to find another galaxy with characteristics similar to DF2. In March, the Yale team published two papers that did exactly these things.

The first paper offered more refined measurements of stellar velocities within DF2. This time, rather than just measuring the velocities of 10 star clusters, van Dokkum and Danieli used the Keck telescope in Hawaii to observe the velocities of the stars within the star clusters. This approach produced far more data that reinforced the team’s earlier conclusion that the galaxy lacked dark matter.

The other paper announced the discovery of a second galaxy, DF4, which also appears to have little, if any, dark matter. Not only does this increase the odds that the DF2 observations are accurate, it also means such ultra-diffuse galaxies might not be so rare. The fact that two were found in quick succession, Danieli says, was “really reassuring.” Nevertheless, she says “it’s still too early to say whether they are super rare or quite common.” The team will begin observing other nearby ultra-diffuse galaxies next month in an effort to answer this question.

But that won’t resolve the mystery of how these strange galaxies came to exist in the first place. Theoretical cosmologists will have to run simulations to determine how a galaxy can lose its dark matter, she says. One leading theory involves tidal interactions, which is astronomer-speak for when the gravitational forces of two neighboring galaxies pull material from each galaxy and distort them. DF2 and DF4 are both near the galaxy NGC 1052, which makes it a strong candidate for the galaxy that stole their dark matter.

However they came to be, Danieli argues that the existence of these galaxies is a blow to the modified gravity explanation for why most galaxies don’t behave as we’d expect.

Known as modified Newtonian dynamics, or MOND, this theory recasts gravity such that it has different effects at the galactic scale. Although MOND has successfully predicted the stellar dynamics of hundreds of galaxies, most of which are relatively isolated, it must be able to predict the dynamics of all galaxies to dethrone dark matter as the going cosmological theory.

As Slosar explains it, the discovery of DF2 and DF4 strengthens the case for the existence of a dark matter particle because it means that it can be separated from normal matter. Because these galaxies behave in line with standard gravitational theory, using the equations discovered by Newton and Kepler, they present a challenge to MOND.

So does the existence of galaxies devoid of dark matter pose an existential threat for MOND? Stacy McGaugh, an astronomer at Case Western Reserve University, doesn’t think so. “When DF2 was first discovered, it was portrayed as a huge problem for MOND,” McGaugh says. “On more careful analysis, it turned out that the prediction of MOND was spot-on what was observed.”

The analysis by McGaugh and his colleagues of DF2’s implications for MOND hinges on the galaxy’s proximity to the massive elliptical galaxy NGC1052. Under a set of “reasonable” assumptions, paired with equations from MOND, McGaugh and his colleagues found that NGC1052’s gravitational effects on DF2 would return stellar velocities similar to what van Dokkum and Danieli actually observed. Although he hasn’t had the chance to repeat this analysis for DF4, McGaugh says it also “appears to be consistent with MOND, since it is likely affected by NGC 1052.”

The existence of these galaxies poses a number of vexing problems for the theory of galactic formation, which must account for how a galaxy can come to be violently stripped of its dark matter and still retain the relative order seen, for example, in the presence of star clusters in DF2 and DF4. Will further observations of ultra-diffuse galaxies resolve the dark matter debate? Probably not, but they will, at least, shed some light on the matter.